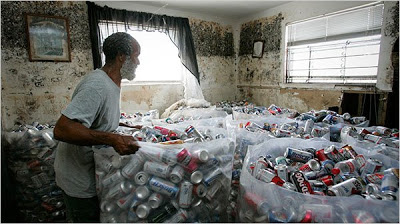 Earnest Hammond, 70, with cans he collects to pay for repairs to his hurricane-damaged home. Photo: Lee Celano for The New York Times.
Leaving the Trailers: Ready or Not, Katrina Victims Lose Temporary Housing
By Shaila Dewan / May 7, 2009

NEW ORLEANS — Earnest Hammond, a retired truck driver, did not get any of the money that went to aid property owners after Hurricanes Katrina and Rita.

He failed to qualify for one federal program and was told he missed the deadline on another. But he did get a trailer to live in while he carries out his own recovery plan: collecting cans in a pushcart to pay for the renovations to his storm-damaged apartment, storing them by the roomful in the gutted building he owns.

It is a slow yet steady process. Before the price of aluminum fell to 30 cents a pound, from 85 cents, he had accumulated more than $10,000, he said, almost enough to pay the electrician. But despite such progress, last Friday a worker from the Federal Emergency Management Agency delivered a letter informing him that it would soon repossess the trailer that is, for now, his only home. 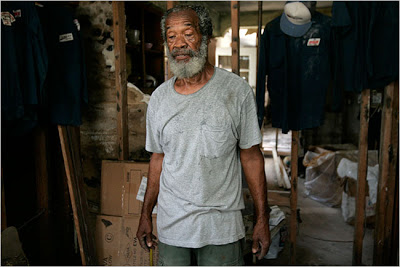 Earnest Hammond has lived in a trailer while he tries to raise money to repair the apartment building he owns. He has not received any federal aid for repairs. Photo: Lee Celano for The New York Times.

Though more than 4,000 Louisiana homeowners have received rebuilding money only in the last six months, or are struggling with inadequate grants or no money at all, FEMA is intent on taking away their trailers by the end of May. The deadline, which ends temporary housing before permanent housing has replaced it, has become a stark example of recovery programs that seem almost to be working against one another.

Thousands of rental units have yet to be restored, and not a single one of 500 planned “Katrina cottages” has been completed and occupied. The Road Home program for single-family homeowners, which has cost federal taxpayers $7.9 billion, has a new contractor who is struggling to review a host of appeals, and workers who assist the homeless are finding more elderly people squatting in abandoned buildings.

Nonetheless, FEMA wants its trailers back, even though it plans to scrap or sell them for a fraction of what it paid for them.

As of last week, there were two groups still in the agency’s temporary housing program: more than 3,000 in trailers and nearly 80 who have been in hotels paid for by FEMA since last May, when it shut down group trailer sites. Most are elderly, disabled or both, including double amputees, diabetes patients, the mentally ill, people prone to seizures and others dependent on oxygen tanks.

Of those in trailers, more than 2,000 are homeowners who fear that the progress they are making in rebuilding will come to a halt if their trailers are taken.

“They had helped me out up until this point, and I couldn’t believe that they suddenly decided, no, we’re not going to let you finish the house, we’re just going to take the trailer, and you can sit here on an empty lot,” said Philipp Seelig, 70, a retired handyman. He said he was about two months from being able to move back into his duplex in the Broadmoor neighborhood. A grant to elevate his house to the required height did not come until December.

Progress on renovations has been slow for many reasons: contractors who did shoddy work or simply absconded with money, baffling red tape and rule changes, and inadequate grants. The opening of new rental units began to accelerate this year, but many projects have been stymied by the recession.

FEMA says it has done everything it can to help those in temporary housing. But, as is so often the case when it comes to Katrina issues, the agency’s clients give a different account. Agency officials insist, for example, that they have been working “extensively” to help families in trailers and hotels find permanent solutions.

“A lot of people are involved in the process of making sure that no one falls through the cracks,” said Manuel Broussard, an agency spokesman in Louisiana. “Everyone’s been offered housing up to this point several times. And for various reasons, they have not accepted it.”

But the dozen temporary housing occupants interviewed for this story said they had received little if any attention from FEMA workers and were lucky to get a list of landlords, much less an offer of permanent housing.

In Baton Rouge, Troy Porter, 47, had been staying in virtual isolation at a $100-a-night Courtyard Inn by Marriott since last June. There, his normally manageable depression deepened until, he said, he would go for weeks without leaving his room.

“The only time I’ve seen FEMA workers was in the last couple of weeks, where they come and give you the paper saying this month is your last month,” Mr. Porter said. “They handed you the paper, and they turned around and walked off.”

Mr. Porter perked up last week when he was visited by Sister Judith Brun, who has been working with Katrina evacuees. In her view, the type of case management endorsed by FEMA — which primarily involves handing someone a list of phone numbers for other overtaxed agencies and, according to numerous Katrina victims, declining to return phone calls — lacks the type of personal engagement that someone like Mr. Porter needs to become self-sufficient.

“Because nobody comes in at a personal level to help him recover,” Sister Judith said, “it costs us tons of money.”

Last year, the Louisiana Recovery Authority was supposed to unveil a more intensive caseworker system for people in temporary housing, but it never materialized. The authority has now asked homeless service organizations like Unity of Greater New Orleans and the Capital Area Alliance for the Homeless in Baton Rouge to help find stable housing for the hotel occupants.

FEMA officials also say that residents can buy their trailers, sometimes for as little as $300. But virtually all of the residents interviewed said they had offered to do so and been told they could not.

Residents said FEMA workers had started visiting them in the past two months, advising them not to move out and saying extensions would be available to those who showed hardship or progress in rebuilding. But agency officials said that was not the case.

Jane Batty, Mr. Seelig’s longtime tenant, who has her own trailer next to his, was not surprised. “There is only one way to categorize this kind of behavior: it’s crazy making,” she said. “They’ve always had a different answer or had a different ploy to get us out of trailers that we had already agreed to buy.”

This entry was posted in RagBlog and tagged Bush Administration, FEMA, Katrina. Bookmark the permalink.