The PATRIOT Act’s War on Charity 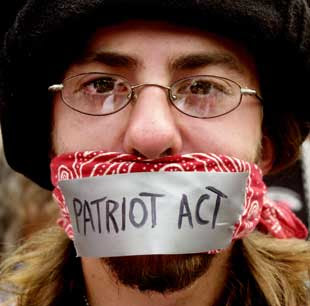 ‘New powers granted to the Treasury Department currently allow the government to shut down charities based on unfounded claims’
By Maya Schenwar / August 5, 2008

Since the PATRIOT Act’s passage almost seven years ago, many of its adverse effects on activist organizations and peace groups have become plain. The law grants the government broad new surveillance privileges and access to private property, and protests and demonstrations have been heavily monitored and contained in the wake of 9/11. But according to a new report, the worst effects on nonprofit organizations have garnered little attention. New powers granted to the Treasury Department currently allow the government to shut down charities based on unfounded claims; to bar nonprofits from operating in some international disaster zones, and to freeze the assets of “designated” charities, leaving large sums of money intended for humanitarian causes to fester indefinitely in Treasury vaults.

Post-9/11 regulations forbid any organization to provide or attempt to provide “material support or resources” to groups or individuals designated as “terrorist.” It’s also prohibited to “otherwise associate” with groups labeled “terrorist.” No charges need to be filed for the government to take action: If the Treasury Department has a “reasonable suspicion” that an organization is violating these rules, it can seize its assets and shut down the group.

“U.S. nonprofits operate within a legal regime that harms charitable programs, undermines the independence of the nonprofit sector, and weakens civil society,” states the recent report, co-authored by the watchdog organization OMB Watch and the philanthropic network Grantmakers Without Borders (GWB).

Seven US nonprofits have been completely shut down for “supporting terrorism.”

According to Kay Guinane, OMB Watch’s director of nonprofit speech rights and one of the report’s co-authors, the government has a free hand to act based purely on suspicion when it comes to the nonprofit sector. Executive Order 13224, which outlaws contact with “terrorist organizations,” is vague about the criteria for how the “terrorist” label – or the “terrorist supporter” label – is to be designated or investigated.

In fact, Guinane told Truthout, “The PATRIOT Act itself allows organizations to be shut down ‘pending an investigation.'” One such organization, Kind Hearts for Charitable Human Development, has not even been designated as a supporter of terrorism, though it was shut down a year and a half ago.

All of the organizations shut down by the government have been Muslim-affiliated charities, according to Guinane.

The PATRIOT Act and its cousins deal a particularly hard blow to US charities that operate internationally. The OMB Watch/GWB report notes that after the 2004 tsunami in Southeast Asia, groups attempting to distribute food and water in areas controlled by the Tamil Tigers risked violating the executive order, which forbids providing “material support” to members of terrorist organizations.

For the nonprofit Humanitarian Law Project (HLP), counterterrorism laws hit at the core of some of its goals, such as introducing conflict resolution techniques and human rights practices to groups like the Kurdistan Workers’ Party (PKK), a designated organization. HLP has fought the PATRIOT Act since its inception. According to attorney David Cole, who has argued for HLP’s rights to operate in “terrorist”-controlled areas, counterterrorism legislation often criminalizes purely humanitarian aid.

“This law is so sweeping that it makes it a crime for our clients to provide medical services to tsunami survivors in Sri Lanka and to provide assistance in human rights advocacy to the Kurds in Turkey,” Cole said during a 2005 hearing.

Moreover, according to the OMB Watch/GWB report, for some groups, counterterrorism laws make it tough to adhere to their ethical and moral codes. The principles of the International Red Cross state, “The humanitarian imperative comes first. Aid is given regardless of the race, creed or nationality of the recipients and without adverse distinction of any kind. Aid priorities are calculated on the basis of need alone.” However, if an organization must avoid the possibility of granting humanitarian aid to anyone affiliated with a terrorist group, priorities can take a very different shape.

Some experts, such as Jim Harper of the libertarian Cato Institute, argue that the PATRIOT Act and laws like it are directly counterproductive, due to their stifling effect on nonprofits.

“For only a remote chance of affecting terrorist activity, the US counterterrorism regime may be interfering with charitable work that would weaken the impetus for terrorist activity in the first place,” Harper said during a press briefing in mid-July. “That’s penny-wise and pound-foolish.”

Particularly pound-foolish, according to the OMB Watch/GWB report, is the way in which the Treasury Department deals with funds seized from “designated” nonprofits. When a nonprofit is deemed to be supporting terrorists, the government can freeze all of its assets indefinitely.

Several organizations whose funds were seized have asked that that money be released and put toward government-approved charities. For example, the Islamic American Relief Agency, barred access to its funds, requested that they be used for humanitarian purposes, such as aid programs to assist victims of Hurricane Katrina and of the 2005 earthquake in Pakistan. Those requests were categorically denied.

According to Guinane, the amount of money seized from nonprofits under counterterrorism laws has not been disclosed by the Office of Foreign Assets Control (OFAC), although OMB Watch has repeatedly asked for the information.

This type of secrecy is typical of the government’s post-9/11 treatment of nonprofits, according to the OMB Watch/GWB report. To shut down an organization, OFAC need not explain the reasons for its actions, or back them up with evidence. No independent review is granted to charities that attempt to challenge their terrorist designation, and most of their due-process rights are denied. They do not have a chance to present their own evidence to counter the government’s accusations. What’s more, the government has no obligation to notify an organization before it is deemed a terrorist supporter and its funds are seized.

Under the PATRIOT Act, the whims of the administration take precedence over nonprofit groups’ constitutional rights, according to Cole.

“The legal regime employed in the name of cutting off terror financing gives the executive branch a ‘blank check’ to blacklist disfavored individuals and groups, imposes guilt by association, and lacks even minimal attributes of fair process,” Cole said during a July press briefing.

So far, Congress has not moved to keep the administration’s counterterrorism programs in check. According to the OMB Watch/GWB report, in order to repair the PATRIOT Act’s damage to the nonprofit sector, Congressional action is a first step.

“Congress should conduct effective oversight and re-assess the current approach to charities, grantmakers and other nonprofits,” the report states.