The Pentagon and All Its Suckers (That Would Be Us) 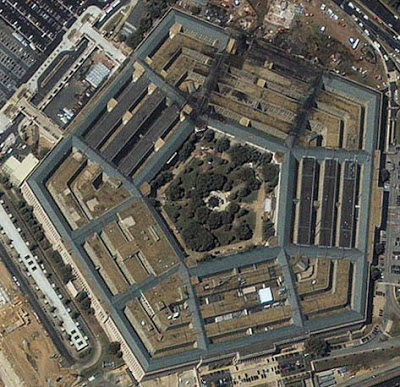 Gargantua’s mouth:
The Pentagon and the suckers

The perpetual menacings of danger oblige the government to be always prepared to repel it; its armies must be numerous enough for instant defense. The continual necessity for their services enhances the importance of the soldier, and proportionally degrades the condition of the citizen. The military state becomes elevated above the civil. The inhabitants of territories, often the theatre of war, are unavoidably subjected to frequent infringements on their rights, which serve to weaken their sense of those rights; and by degrees the people are brought to consider the soldiery not only as their protectors, but as their superiors. The transition from this disposition to that of considering them masters, is neither remote nor difficult; but it is very difficult to prevail upon a people under such impressions, to make a bold or effectual resistance to usurpations supported by the military power.” — Alexander Hamilton

“In the councils of government, we must guard against the acquisition of unwarranted influence, whether sought or unsought, by the military-industrial complex. The potential for the disastrous rise of misplaced power exists and will persist.” – Dwight Eisenhower, January 17, 1961, Farewell Address.

During pre-game Super Bowl ceremonies Queen Latifah sang America the Beautiful. Following her, American Idol winner Carrie Underwood began warbling the Star Spangled Banner. Four jet fighters swished over the stadium. Did any of the cheering crowd or the tens of millions watching on TV ask how much it cost to have the thrill of two screaming jets offer the public supersonic foreplay before extra large men smashed and bashed through the thin membrane (the line) to reach the tantalizing quarterback?

In his farewell address, Eisenhower would not have dreamed of adding military sports/entertainment complex to his now fabled military industrial, military scientific and academic complexes. Rather, he called for “statesmanship” by which he meant molding, balancing, and integrating “these and other forces, new and old, within the principles of our democratic system — ever aiming toward the supreme goals of our free society.”

Empty rhetoric? Now, 44 cents of every taxpayer’s dollar feeds the military budget at a time when no nation has a military capable of challenging us. Maybe Obama should call for a national holiday just to appreciate the failure of Presidents and Congresses to take Ike’s warning seriously.

The Orwellian name change from War Department to Defense Department should have sparked national skepticism. Since 1947, DoD holds the world record for spending, but has yet to defend the United States. Under the pretext of defense, Truman sent troops to Korea (Eisenhower stopped U.S. involvement in that war). Subsequently, U.S. troops have attacked and occupied more than a dozen countries, none of which threatened U.S. territory (Korea, Dominican Republic, Vietnam, Laos, Cambodia, Grenada, Panama, Libya, Somalia, the former Yugoslavia, Iraq, and Afghanistan).

The DoD, however, cannot claim victory in its four major wars: Korea (1950-3), Vietnam (1964-75), Afghanistan (2001-?), and Iraq (2003-?). Before each invasion, war advocates shook the impending “domino” effect. Now it’s the spread of terrorism. During the Cold War, all Asia would somehow fall under red rule if the Chinese or Vietnamese Communists won in Korea or Vietnam. The Communist Party still rules in China and Vietnam, both major U.S. trade partners. U.S. forces triumphed in Grenada and Panama where they met no major and ongoing resistance, and during Gulf War I, when Iraqi troops retreated and got “turkey shot.”)

Last December, despite the DoD’s no-win record when the enemy fights back and without any sign that a rival nation plans an attack against us or any of our vulnerable allies, Congress passed without debate the highest “defense” budget in human history.

Since 1988, as the Soviet Union neared collapse and no major power threatened, the military has ingested some $5.1 trillion. From 1999 to 2010, the DoD budget increased 153%. After 2001, when 19 suicidal men armed with box cutters hijacked and crashed planes into buildings, the Pentagon spent more than it did in Cold War years.

By 2008, total weapons acquisition “cost growth” had reached nearly $300 billion over initial estimates. In other words, cost overruns of weapons alone surpassed the total 2000 defense budget! Why did the United States government invest more, and at an increased rate, than when it faced all the Soviet divisions and 20,000 nuclear weapons?

According to the Stockholm International Peace Research Institute, “the USA is responsible for 41.5 per cent of the world’s total defense spending, distantly followed by China (5.8% of world share), France (4.5%), the UK (4.5%), and Russia (4%).”

In 2005, the total value of DoD assets was estimated at $1.3 trillion, with $1.9 trillion in liabilities. The Department has a workforce of over 2.9 million of military and civilian personnel, much larger than any other organization worldwide.

Wal-Mart, the largest corporate employer, has 1.8 million on payroll. The Pentagon’s workforce is twice as large. The net income of the top 10 global Fortune 500s (including Exxon, Wal-Mart, BP, and Chevron) does not reach even 50% of DoD’s budget.

Last year, the Pentagon had 539,000 facilities (buildings, structures, and linear structures), and 5,570 military sites; it also occupies 29 million acres of land, almost half the size of the United Kingdom.

The United States also has 837 overseas military bases, not including undisclosed secret bases. The Pentagon has 716 bases in 150 of the 192 countries in the world; others in U.S. territories abroad. The DoD does not count facilities with value of less than $10 million or those occupying less than 10 acres. The Pentagon itself claims the record for biggest building in human history (6.5 million square feet), 37 times larger than the Capitol.

Business scams promise high rates of return at little risk to investors. The Pentagon, however, pledges only to keep the nation well defended from all outside threats. Since no military threats have existed for almost two decades, DoD officials and their neo-con cousins invent them. And the suckers — U.S. taxpayers — invest.

[Saul Landau is an Institute for Policy Studies fellow whose A Bush and a Botox World was published by Counterpunch. Nelson P. Valdés is Professor Emeritus at the University of New Mexico.]

This entry was posted in RagBlog and tagged Department of Defense, U.S. Government. Bookmark the permalink.