The Poetry of Sarah Palin 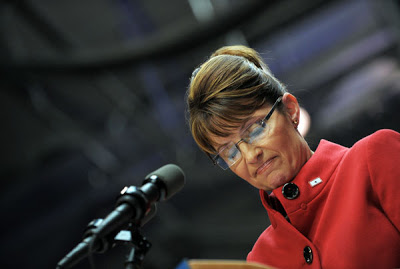 See some of Sarah Palin’s finest work, Below.

It’s been barely six weeks since the arctic-fresh voice of Alaskan poet Sarah Heath Palin burst upon the lower 48. In campaign interviews, the governor, mother, and maverick GOP vice presidential candidate has chosen to bypass the media filter and speak directly to fans through her intensely personal verses, spoken poems that drill into the vagaries of modern life as if they were oil deposits beneath a government-protected tundra.

Thursday’s nationally televised debate with Democrat Joe Biden could give Palin the chance to cement her reputation as one of the country’s most innovative practitioners of what she calls “verbiage.”

The poems collected here were compiled verbatim from only three brief interviews. So just imagine the work Sarah Palin could produce over the next four (or eight) years.

“On Good and Evil”

It is obvious to me
Who the good guys are in this one
And who the bad guys are.
The bad guys are the ones
Who say Israel is a stinking corpse,
And should be wiped off
The face of the earth.

That’s not a good guy.

You can’t blink.
You have to be wired
In a way of being
So committed to the mission,

The mission that we’re on,
Reform of this country,
And victory in the war,
You can’t blink.

So I didn’t blink.

These corporations.
Today it was AIG,
Important call, there.

It was an unfair attack on the verbiage
That Senator McCain chose to use,
Because the fundamentals,
As he was having to explain afterwards,
He means our workforce.
He means the ingenuity of the American.
And of course that is strong,
And that is the foundation of our economy.
So that was an unfair attack there,
Again based on verbiage.

“Is that what you are seeking, also?
“That strategy that has worked in Iraq?
“That John McCain had pushed for?
“More troops?
“A counterinsurgency strategy?”

I do not have those allegiances
To the power brokers,
To the lobbyists.
We need someone like that.

Ultimately,
What the bailout does
Is help those who are concerned
About the health care reform
That is needed
To help shore up our economy,
Helping the—
It’s got to be all about job creation, too.

Shoring up our economy
And putting it back on the right track.
So health care reform
And reducing taxes
And reining in spending
Has got to accompany tax reductions
And tax relief for Americans.
And trade.

We’ve got to see trade
As opportunity
Not as a competitive, scary thing.
But one in five jobs
Being created in the trade sector today,
We’ve got to look at that
As more opportunity.
All those things.

“Challenge to a Cynic”

You are a cynic.
Because show me where
I have ever said
That there’s absolute proof
That nothing that man
Has ever conducted
Or engaged in,
Has had any effect,
Or no effect,
On climate change.

4 Responses to The Poetry of Sarah Palin