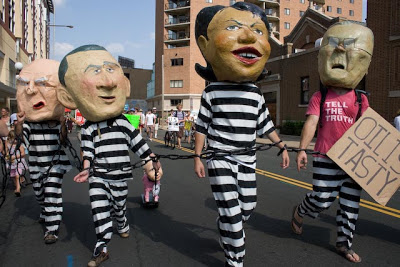 Creative nonviolence: street theater at the 2008 Republican Convention in St. Paul. Photo by Neal Reiter.
If you want nonviolence, report it

If newspaper editors are serious about wanting young people to choose nonviolence, then they must do more than pounce on stories about young people who use violence. They must report on the alternative.

An editorial published recently by the Austin American-Statesman admonished readers to view a trial in Minnesota as a “cautionary tale for activists.” Two men from Austin were charged with making explosives intended for use during the Republican National Convention last September

Cautionary tales are important, and it’s fortunate that the explosives were never used. I wholeheartedly agree with the editorial that using violence to effect change is counterproductive. But this story, focusing only on these two “activists” (and, later, their former colleague-turned FBI informant) has given a false impression of what activism actually looked like at both the Democratic and Republican National Conventions.

The case of the men from Austin was the only front-page news (Sept. 9, 10, 11, 25 and Jan. 9, 27, 28, 31) published in the Austin American-Statesman about any aspect of the demonstrations at either convention. The larger, unreported story was that an array of creative, nonviolent action was organized in Denver and St. Paul by committed people who had gathered there to exercise their First Amendment rights to assemble peacefully despite the restrictions placed on them. People whose message was essentially, “it’s counterproductive to use violence (invasion, occupation, torture, war) to effect change” were muffled by the police and the press.

I followed news about the demonstrations at both conventions mostly through independent media reports and eye-witness accounts from friends who were there. Events included parades, marches, permitted encampments, art displays, concerts, street theatre and public forums. In Denver, a group of hundreds of young people led by members of Iraq Veterans Against the War marched peacefully for several miles to deliver a statement to Obama campaign officials at the convention site. In St. Paul, a similar march was led by several hundred members of Veterans for Peace who had held their annual convention in St. Paul in order to coincide with the RNC. A group formed by Voices for Creative Nonviolence walked 450 miles from Chicago to St. Paul during the month ahead of the convention to speak in towns along the way about the ongoing occupation of Iraq. CodePink activists rode bicycles around the heavily barricaded convention sites to promote a “War is Not Green” message, and they used some spontaneous satire to dramatize corporate influence of politicians and to resist the provocative corralling of demonstrators by cordons of black-clad riot police and national guard troops.

If newspaper editors are serious about wanting young people to choose nonviolence, then they must do more than pounce on stories about young people who use violence. They must report on the alternative. Otherwise, part of the message young people get is that only violence warrants notice. Jurors have debated the influence of the FBI informant in the RNC case. Another discussion could reasonably ask whether the major media plays a role in “inducing” people to use violence by selling it so heavily in the news while downplaying or ignoring news about people who practice nonviolent resistance.

Martin Luther King, Jr. was rightly cited in the American-Statesman editorial as a powerful practitioner of nonviolence. His resistance was active, not “passive,” as the editorial termed it.

At Austin’s MLK Day celebration, and also in our public high schools this year, the Nonmilitary Options for Youth group that I work with has used a “peace wheel of fortune” that we made as a peace education tool. The wheel contains names and pictures of peacemakers past and present, including prominent figures like MLK and Gandhi, and others not as familiar. Students spin the wheel and, for a prize, are asked to tell us something about the person on the wheel where it stops. We are encouraged when we see how much students like the wheel, so we’re also saddened when we see how little they are being taught in school about even the most well-known nonviolent movements. If young people know only that MLK “had a dream,” but don’t know what he did to achieve it, and if they have never heard of Gandhi or Cesar Chavez, then they have little idea of what nonviolent resistance actually entails: the boycotts, labor strikes, fasts, sit-ins, teach-ins, mass marches, court cases, good faith negotiations and the long road made of many important steps. Tools and strategies evolve over time and adapt to different situations because nonviolence is a living history.

Don’t miss out on this history as it is being lived. Don’t cheat kids out of it. In this time of hopefulness and reform, I’d like to see the mainstream media commit to report more than the cautionary tales, and to tell the stories of the many creative ways that people are using nonviolent methods to defend our freedoms and bring about positive change. Do it because it will increase fairness and accuracy in reporting, and do it because it will save lives.

[Van Haitsma is active with Nonmilitary Options for Youth in Austin and writes as makingpeace on the Austin American-Statesman reader blogs.]

2 Responses to The Press Doesn’t Cover Nonviolence : A Cautionary Tale