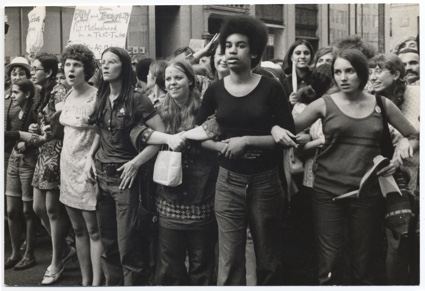 Women march in August 26, 1970, in a scene from the movie, She’s Beautiful When She’s Angry. Photo by Diana Davies/International Film Circuit.

AUSTIN — A documentary about the early women’s movement, Mary Dore’s She’s Beautiful When She’s Angry, will be shown in Austin on Saturday, April 2, 2016, at Faith Presbyterian Church, 1314 East Oltorf. The film was highlighted on The Rag Blog when it premiered in Austin in 2015.

The Austin chapter of Democratic Socialists of America (DSA) is sponsoring this powerful film testament to a movement that changed America. Suggested donations will support the National Network for Abortion Funds, but no one will be turned away for lack of funds. In addition to screening this film, the local DSA chapter has registered a bowling team for the annual Bowl-a-thon that raises money to provide access for low-income women seeking abortion services. If you are unable to attend the movie, but would still like to donate, go to the Austin DSA team page.

Texas legislation currently on appeal to the Supreme Court would severely restrict access to Texas abortion services, limiting service providers and imposing huge travel costs for many women in the state. These costs disproportionately impact low-income women. Come to the film or donate directly to the Austin DSA Bowling Team to help in the fight for reproductive justice. Your support is crucial to building a future where all women can plan their lives and families with dignity and community support.