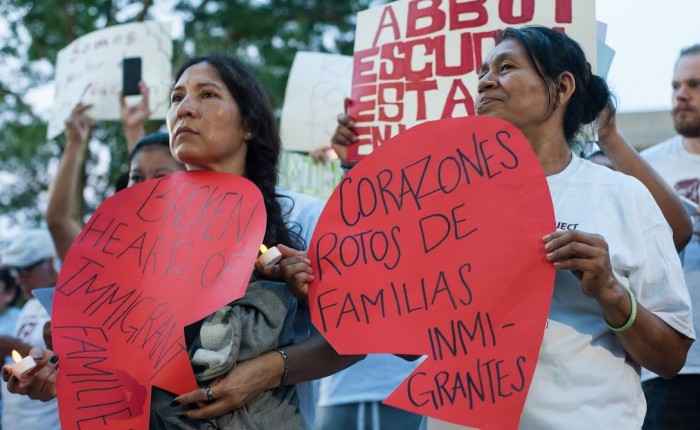 AUSTIN — A three-day Pilgrimage for Immigrant Families will culminate in a Rally for Immigrant Rights at noon, Saturday, November 21, 2015, across the street from the Texas Governor’s Mansion, 1106 Lavaca Street, in Austin. The rally will be joined by marchers coming from Taylor and Pflugerville, with a request that Texas Gov. Greg Abbott meet with immigrant families.

Speakers at the Saturday rally will include State Sen. Sylvia Garcia, union leaders from Education Austin and the Service Employees International Union, and members of the faith community. Kiko Villamizar and Cecilia and the Broken Hearts will provide music.

The pilgrimage will begin in front of the Hutto Immigrant Detention Facility, 1001 Welch Street in Taylor, Texas, at 9 a.m. on Thursday, November 19. Day 2 will begin at 8 a.m. Friday at St. Elizabeth Catholic Church in Pflugerville, and a Solidarity Candlelight Vigil will take place that evening from 6:30-7 p.m. at the Workers Defense Project in Austin.  And on Saturday, marchers will deliver their request to Gov. Abbott at a noon rally across the street from the Governor’s Mansion, 1106 Lavaca Street.

You can learn more, and register your attendance, at the Workers Defense Project’s Facebook page.

Almost a year ago, President Obama’s executive action on immigration engendered hope among many immigrant families. But court challenges and opposition by Texas Gov. Greg Abbott have been the unfortunate reality for immigration reform. Many families seeking refugee status are deported or find themselves locked away in a private prison network, sometimes with their children behind bars.

These ongoing travesties are being met with an organized resistance spearheaded by the Workers Defense Project and Grassroots Leadership.

Learn more at Workers Defense Project. And learn what you can do to end family detention, protest private prisons, and support hunger strikers at the Hutto Family Detention Center, by visiting Grassroots Leadership.