The Rick Warren Debacle : Views From the Left and the Right 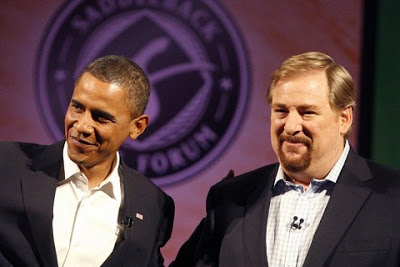 Barack Obama’s choice of pastor Rick Warren to give the invocation at his inauguration has stirred up a storm.

Dancing with Rick Warren is more than making nice with a sector of our society that Obama probably views as an important component in his perceived grand consensus. This is a move that carries with it great symbolism, and it seems quite clear that it reflects a serious tactical miscalculation on the part of the Obama transition.

See ‘Censuring and Moving On’ by Todd Gitlin, and ‘Why Obama Chose Rick Warren’ by Jon Henke, Below.

Below are two interesting takes on President-elect Barack Obama’s astonishing choice of Rick Warren to deliver the invocation at his inauguration – and the ensuing storm that decision has created.

The first is from sociologist and former SDS leader Todd Gitlin; the second is from a right wing blogger. Carl Davidson of Progressives for Obama sent them our way with these words:

“The right has its own troubles here, and senses it is being divided, as in ‘unite the progressive forces, win over the middle and divide the right.’ Todd Gitlin’s piece is a call to unite the progressives once again, post-venting. Somehow, though, I suspect there’s too many wild cards here to render a final verdict yet.”

Bottom line, most of us remain appalled and at the moment have trouble seeing explanations as anything more than rationalizations. And I am one inclined to give Obama the benefit of the doubt, at least until the man takes office!

I believe Obama to be his own man to a unique degree, am not all that concerned about his appointments, and still think that, in the end , he will be one of our most progressive presidents – if only because the times and the economy will demand such a president. And because I believe the left will work hard to hold him accountable.

But dancing with Rick Warren is more than making nice with a sector of our society that Obama probably views as an important component in his perceived grand consensus. This is a move that carries with it great symbolism, and it seems quite clear that it reflects a serious tactical miscalculation on the part of the Obama transition. Personally, I strongly believe that it reveals nothing about the man’s character, but it may give even reluctant supporters pause about his eccentric strategic approach as has been revealed so far.

Rick Warren, though he stands out in the religious right for his positions on AIDS and the environment, has not simply opposed abortion and Proposition 8. This man has compared efforts to make abortion more accessible to the Holocaust and has informed us that homosexuality is akin to incest and pedophilia.

My initial reaction to Obama’s Rick Warren announcement was horror.

After what seems like weeks of intense back-and-forth, but in fact is only a day’s worth, I’m still appalled. It’s one thing to invite the adversary into the tent the better to defeat him with a smile–neutralize him, in colder terms–but it’s quite another to give him a throne, even if a purely symbolic throne. Warren’s political interventions are mostly terrible (AIDS and environment are the exceptions). The argument that this was crass political calculation–triangulation, as another president once said–comparable to FDR making nice to segregationists and Stalin, falls afoul of the fact that this overture to Warren was unnecessary. To get the New Deal, FDR really did have to make deals with the racist devil. To defeat Hitler, FDR really had to ally with Stalin. It’s history: get used to it. But I’ve yet to see a single argument to the effect that Obama’s invitation to Warren accomplishes a single practical thing, let along that it was necessary. So I take it as an ugly brush-back: a gratuitous slap at feminists and LGBT’s. I hope it’s ill-considered, impromptu, but suspect it’s actually one of a series–bridge-building to the right on principle.

But meanwhile, some proportion here, people. Other appointments are arguable but some are clearly superb. Harold Meyerson, than whom no one knows L. A. and labor better, says bluntly: “Hilda Solis is great.” (So does every union person I’ve seen quoted.) E. J. Dionne, Jr., makes a firm case for Arne Duncan at Education. John Judis calls Obama’s incoming science adviser John Holdren “the Mick Jagger of climate change,” meaning that “by the end of Holdren’s speech, I was ready to join the world environmentalist crusade.” When I was teaching at Berkeley, I heard Holdren, who taught physics there, give a fabulous talk about nuclear dangers.

Wes Boyd and Joan Blades had the right idea, back in the fading days of the 20th century, when they started what became the excellent Move On with a simple petition.

Vis-a-vis Clinton-Lewinsky, recall that their petition read: “Congress must Immediately Censure President Clinton and Move On to pressing issues facing the country.”

And, an extremely interesting view from the right:

Barack Obama’s selection of Rick Warren to give the invocation at his inaugural ceremony may seem like a nice overture – a reassuring gesture – to the middle and the Right, but it is stirring up a great deal of grief on the Left.

This is exactly what Obama intends.

Let’s back up for a moment: President Clinton went into office in 1993 and quickly alienated the public, resulting in an opposition Congress for the next 6 years.

Clinton’s later triangulation conceptually legitimated the policies of Republicans, but it put public approval (and some political capitabl) back behind Clinton.

But Barack Obama faces a much different situation. He will walk into office with a very solid majority Democratic Senate and House, and with overwhelming public favor. Obama does not have to seek the best deal he can get out of a Republican agenda; he does not have to moderate his policy agenda for a Republican Congress.

Obama can set his own agenda….as long as he has the public on his side.

I’m not sure why this rhetorical moderation is still a surprise to anybody. Obama has been doing this for awhile: he praised Reagan, recognized legitimate grievances of opponents of affirmative action, affirmed the excesses of New Deal/Great Society liberalism. But while each of those set aflutter the hearts of independents, moderates and the Right, none of them involved actual policy changes.

Most people have only a very superficial intersection with politics, so trivial gestures – like inviting an evangelical preacher to deliver the invocation for a Democratic President – are powerful. They send the signal to a low-information public that Obama is one of them, sympathetic to them, respectful of them…without actually requiring substantive political concessions of the Obama administration.

And if the noisy Left cries foul at Obama’s un-progressive rhetoric…well, so much the better for the substantive progressive agenda.

Rhetorically moderate, politically Left. Expect to see that over and over again from President Obama.

3 Responses to The Rick Warren Debacle : Views From the Left and the Right