The Right Wing Vision of the Future

I received this unsolicited from someone identified as Linda Hunnicutt. I thought it suitable to share because it is such a fear-filled (and racist) image that the right insists on painting. Some of the statements are truly remarkable. 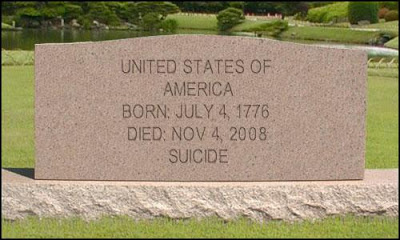 Forget about Conservatism vs Liberalism and look at some historically verifiable facts.

Their industries would be over-taxed and over-regulated and ours would thrive.

Their public schools would indoctrinate, and ours would educate.

Their disruptive students would get counseled, and ours would get spanked.

History has shown us that the above would almost surely happen.

The following would PROBABLY happen. Most of their married mothers would have to work, and ours could stay home and raise children.

They’d have mosques full of subversives, and we’d have churches full of patriots.

Their citizens would not have guns, and ours would. (Yamamoto, after Pearl Harbor, said, “You cannot invade America. There would be a gun behind every blade of grass.”)

SECESSION SOUNDS GOOD TO ME AT THIS POINT

Let the Liberals have their states and people that want a nanny state completely controlled can move to those states. Give us our Freedom and let us regain our self respect and live by the rules set forth in the Constitution.

Source / Freedom Is Not Dead

This entry was posted in RagBlog and tagged Conservatives, Extremism, Right Wing. Bookmark the permalink.

6 Responses to The Right Wing Vision of the Future