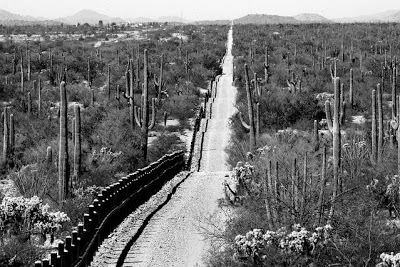 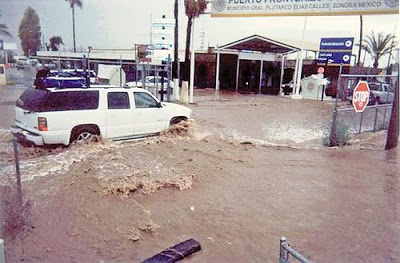 From the moment Congress first proposed putting a wall along the Rio Grande on Texas’ southern border to reduce illegal immigration, I thought it was not just a bad idea but an insane one. As far as I can tell, when it’s finished the United States will be the first nation state in the history of the planet to wall off a major river and leave the river on the other side!

Anyone who’s spent time along the border knows that limiting river access – whether for crops, livestock or recreation – will cause the locals big problems. Plus, by building the fence in a river basin, the project almost ensures problems with erosion, runoff and flooding, not to mention disrupting the environment.

Local officials and landowners in the Rio Grande Valley fought construction of the wall, but have not succeeded in stopping it. Elsewhere, we can already see what’s in store along the Rio Grande. Via one of my favorite bloggers, Bryan Finoki at Subtopia: A Field Guide to Military Urbanism, I saw this report that:

Apparently, the new $21.3 million, 5.2-mile fence along the monument’s southern border, basically turned into a dam during the storms on July 12th. The wire-mesh construction, meant to prevent crossers and vehicles but allow water to pass through, halted the natural flow of floodwater along the border when, according to a National Park Services report (pdf), “Debris piled up against the fence, including in drainage gates designed to prevent flooding, and the 6-foot deep fence foundation stopped subsurface water flow.” So, instead of flowing north to south, as I understand it naturally should, the floodwater carried laterally through the port of entry pooling 2 to 7 feet high and causing tons of damage to the ecology and nearby businesses.

What’s a crime is that none of this came as a surprise to anyone. The DHS had been warned of this sort of potential before they chose to ignore the severity of that discussion, and decided to build a fence regardless, even though they claimed the design would not hamper this flow in any significant way. You can read the full report here (pdf) outlaying the ecological and infrastructural damage that was caused by the border fence, and what can be expected in the future.

That was as predictable as the sunrise. And what will be any different, exactly, about Texas’ fence? If the feds can’t contain runoff on a flat plain, how in the world do they expect the fence to interact with the environment along an actual, large river in the event of a flash flood? Where will this fence divert runoff otherwise headed for the river? There’s no telling, but it’s a safe bet we won’t find out until the fence is built, the first gullywasher hits, and 2-7 feet of floodwaters back up into some Texas border town as happened in Arizona.

See the full post including an excellent batch of links at the end from Subtopia.