The Rogues’ Gallery of Food Awards 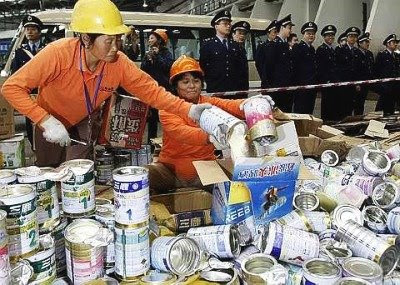 The main award goes to China for the sheer number of melamine-tainted products it manufactured and distributed, and if it was up to me to distribute real food awards (an institution that is sorely needed, IMHO), they’d be the recipients of quite a few more. I sincerely hope China will learn the many, many food safety lessons and review the entirety of their food production lines in a clear and verifiable manner if they want to entice the rest of the world with their foodstuffs. For now, I’m not advocating anyone to purchase any edibles made in China. It will change in due course.

China is not alone in my books. Case in point: Centers for Disease Control and Prevention says that last year 76 million Americans were struck by food-borne illnesses, and more than 300,000 were hospitalized. Sadly about 5,000 each year succumb to microbial infections.

Follow me to the Rogues’ Gallery of Food Awards.

Best Meat Recall Award: Hallmark/Westland Meat Packing of California agreed to take back more than 143 million pounds of raw and frozen meat when it was found in violation of inspection rules.

Stupidest Food Product (since recalled) Award: Cambrooke Foods® makes “Low Protein Imitation Cream Cheese products in the vain hope that it might fool people into buying it. Because of possible health risks they have recalled as a precaution because some of their products may be contaminated with Listeria monocytogenes, an organism which can cause serious and sometimes fatal infections in young children, frail or elderly people, and others with weakened immune systems. Although healthy individuals may suffer only short-term symptoms such as high fever, severe headache, stiffness, nausea, abdominal pain and diarrhea, Listeria infection can cause miscarriages and stillbirths among pregnant women.

Best Villain: not enough has been written about the evils of high-fructose corn syrup:

To sum it up colas have truckloads of sugar and hardly any nutrients and may contain caffeine, an addictive drug. And it bloats your body with chemicals.

Consistency Category Award: a perennial food bandit is a packet of sour cream and onion potato chips. The damage: 150 calories for a dozen chips, 10 g fat (of which 3 g is saturated), and a ghastly 210 mg sodium! Empty calories to boot with extra trans-fats and a dash of MSG.

Worst Supporting Category Award: the most common form of bread in America is the mass-produced white, soft doughy bread in plastic bags with a long shelf life. Look at the ingredients in an average packaged white bread and you will see that it contains flour plus sugar, corn syrup (again) and a dozen other ingredients. True bread is simply flour and water with a pinch of salt and yeast. Stick to your local baker, that is if they still exist in your neighborhood!

Special Award for Underhandedness: what Kellogg’s does not want you to know: the company touts that its Special K Fruit & Yogurt cereal combines the crunch of whole grain goodness, the smooth creaminess of yogurt and the sweet taste of berries. Yeah, right! There is more refined rice than whole grain wheat, no berries (just dyed apple pieces), and no yogurt (just yogurt powder that is usually heat treated, killing any beneficial bacteria) in the cereal. And while I’m the Kellogg’s case, I might as well inform you that their “Kellogg’s Eggo Nutri-Grain Pancakes” is bereft of either “Made with Whole Wheat and Whole Grain” but consist primarily of white flour. Moving along.

Supporting Make-up Award: Anyone for chocolate-laden doughnuts? Consider this then: per unit you get to eat 300 calories, 19 g fat (of which 6 g is saturated). All doughnuts are high in trans-fats, sugar and are extremely calorific. Supermarket versions are the worst!

Sneakiness Award: if you thought that McDonald’s Chicken Selects Premium Breast Strips sound healthy, you’re in for a surprise: ounce for ounce, the Selects are no healthier than the chain’s Chicken McNuggets. A standard, five-strip order has 670 calories and 10 grams of artery-clogging fat. That’s about the same as a Big Mac, but the burger has 1,040 mg of sodium, while the Selects hit 1,660 mg!

Best Disguise Award: another calorific horror story is the Chipotle Chicken Burrito (tortilla, rice, pinto beans, cheese, chicken, sour cream, and salsa) It combines a whopping 1,040 calories and 16½ grams of saturated fat in one serving and the burrito is loaded with 2,500 mg of sodium!

Best Fantasy Story Award: EnvigaCoca-Cola/Nestle claims that their new drink combination of caffeine and an antioxidant extracted from green tea will cause people to burn more calories than the drink provides and help them control their weight. In fact, one in five people drinking Enviga burn fewer, not more, calories and long-term studies on the ingredients show no consistent effect on weight. ole!

From the excellent E-coli blog a sister site to Marler Clark’s:

Okay, so 2008 was NOT as big a year for E. coli recalls as was 2007. Total amount of beef recalled last year was around seven million pounds; far less than the 29 million pounds recalled during 2007.

A very interesting site I keep my eyes on is Bill Marler’s blog, published by Marler Clark’s (see sister site above, E-coliblog.com). Check out his 2009 food challenges:

This entry was posted in RagBlog and tagged Food Contamination. Bookmark the permalink.

3 Responses to The Rogues’ Gallery of Food Awards