The Shoe: ‘Out of Loyalty to Every Drop of Innocent Blood That Has Been Shed’ 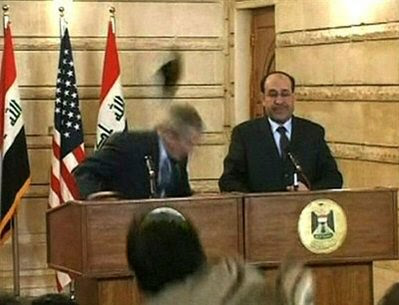 Why I threw the shoe

I am no hero. I just acted as an Iraqi who witnessed the pain and bloodshed of too many innocents

I am free. But my country is still a prisoner of war. There has been a lot of talk about the action and about the person who took it, and about the hero and the heroic act, and the symbol and the symbolic act. But, simply, I answer: what compelled me to act is the injustice that befell my people, and how the occupation wanted to humiliate my homeland by putting it under its boot.

Over recent years, more than a million martyrs have fallen by the bullets of the occupation and Iraq is now filled with more than five million orphans, a million widows and hundreds of thousands of maimed. Many millions are homeless inside and outside the country.

We used to be a nation in which the Arab would share with the Turkman and the Kurd and the Assyrian and the Sabean and the Yazid his daily bread. And the Shia would pray with the Sunni in one line. And the Muslim would celebrate with the Christian the birthday of Christ. This despite the fact that we shared hunger under sanctions for more than a decade.

Our patience and our solidarity did not make us forget the oppression. But the invasion divided brother from brother, neighbour from neighbour. It turned our homes into funeral tents.

I am not a hero. But I have a point of view. I have a stance. It humiliated me to see my country humiliated; and to see my Baghdad burned, my people killed. Thousands of tragic pictures remained in my head, pushing me towards the path of confrontation. The scandal of Abu Ghraib. The massacres of Falluja, Najaf, Haditha, Sadr City, Basra, Diyala, Mosul, Tal Afar, and every inch of our wounded land. I travelled through my burning land and saw with my own eyes the pain of the victims, and heard with my own ears the screams of the orphans and the bereaved. And a feeling of shame haunted me like an ugly name because I was powerless.

As soon as I finished my professional duties in reporting the daily tragedies, while I washed away the remains of the debris of the ruined Iraqi houses, or the blood that stained my clothes, I would clench my teeth and make a pledge to our victims, a pledge of vengeance.

The opportunity came, and I took it.

I took it out of loyalty to every drop of innocent blood that has been shed through the occupation or because of it, every scream of a bereaved mother, every moan of an orphan, the sorrow of a rape victim, the teardrop of an orphan.

I say to those who reproach me: do you know how many broken homes that shoe which I threw had entered? How many times it had trodden over the blood of innocent victims? Maybe that shoe was the appropriate response when all values were violated.

If I have wronged journalism without intention, because of the professional embarrassment I caused the establishment, I apologise. All that I meant to do was express with a living conscience the feelings of a citizen who sees his homeland desecrated every day. The professionalism mourned by some under the auspices of the occupation should not have a voice louder than the voice of patriotism. And if patriotism needs to speak out, then professionalism should be allied with it.

I didn’t do this so my name would enter history or for material gains. All I wanted was to defend my country.

[Muntazer al-Zaidi is an Iraqi reporter who was freed this week after serving nine months in prison for throwing his shoe at former US president George Bush at a press conference. This edited statement was translated by McClatchy Newspapers correspondent Sahar Issa www.mcclatchydc.com.]

11 Responses to The Shoe: ‘Out of Loyalty to Every Drop of Innocent Blood That Has Been Shed’