The Swine Flu Scare, and the 1918 Spanish Flu Pandemic 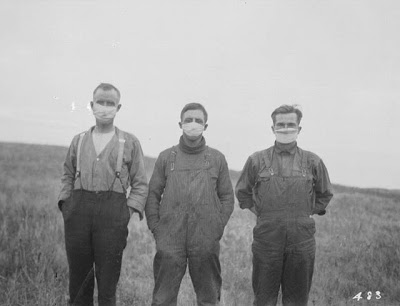 When the deaths began to pile up, and most of those affected were young healthy people, just like the Spanish flu, it is easy to see how the World Health Organization was afraid they might be looking at another deadly flu pandemic…

In 1918, the Spanish flu raged around the world, killing many millions of people. That pandemic was caused by a strain of the flu virus called H1N1. A few days ago, the H1N1 virus popped up again. This time it was called Swine flu. Although it was believed to have started in Mexico (that’s where the largest number of patients and deaths are so far), it spread quickly and in just a few days has shown up in several countries on several continents.

When the deaths began to pile up, and most of those affected were young healthy people, just like the Spanish flu, it is easy to see how the World Health Organization (WHO) was afraid they might be looking at another deadly flu pandemic — just like the one 91 years ago.

The WHO, the USCDC (Center for Disease Control) and state health departments have quickly taken action to try and head off the feared new pandemic. People with any flu symptoms are urged not to go to work or school. Drugstores are selling out of face masks. Event have been cancelled and schools have been closed. News of the new flu have been covered extensively by all types of media.

These may be reasonable actions or may be overreactions. No one knows yet. But scientists who have been studying the new H1N1 virus think the new flu may be more benign than was previously believed. They have found some small differences between the current version of H1N1 and the 1918 H1N1.

This does not mean the virus is not dangerous. It obviously has killed. But it may turn out to be no more deadly than more common strains of flu (which can kill 30,000 to 40,000 people each year in the United States). That is a tragic figure, but nowhere near the death toll racked up by the 1918 Spanish flu.

Another oddity of this new Swine flu is that it is not striking the elderly. Normally, the elderly and children are the groups most likely to die from the flu. Why is this virus different?

The scientists think they may know. There was a flu pandemic in 1957 that killed around 2 million people. It is believed that those who were exposed to the 1957 flu may have an immunity to the current H1N1 virus. That would basically cover those in their mid-fifties and older.

Other than gaining a bit of wisdom, there aren’t a lot of advantages to growing old. But it looks like this could be one of those few advantages.

4 Responses to The Swine Flu Scare, and the 1918 Spanish Flu Pandemic