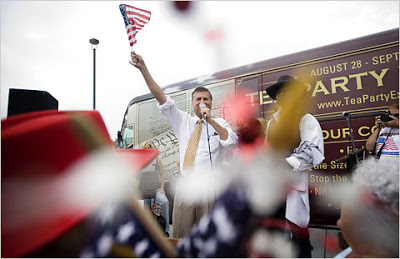 The first nine years of the new century have yet to find a defining label, something as catchy as Tom Wolfe’s “Me Decade” of the 1970s or the “Silent Generation” of 1950s men in gray flannel suits. Bookmarked by the horror of 9/11 and the history of a black president, the aughts certainly don’t lack for drama.

But last week, lost in the commotion over the brat’s cry of Joe Wilson and the shotgun blast of rage in the Washington protest, something definitive was released just as this decade nears its curtain call.

For average Americans, the last 10 years were a lost decade. At the end of President George W. Bush’s eight years in office, American households had less money and less economic security, and fewer of them were covered by health care than 10 years earlier, the Census Bureau reported in its annual survey.

Of course this reflects the ravages of a horrid recession. But the decline started before the collapse in the housing and financial sectors — and it was calculated, in the eyes of some.

Harvard economist Lawrence Katz called it “a plutocratic boom.” If anything comes close to defining the era, that would be my nomination. President Bush cut $1.3 trillion in taxes — and the biggest beneficiaries by far were the top 1 percent of earners. At the same time, Wall Street was inflated by the helium of a regulation-free economy that eventually gave us Bernie Madoff and banks begging for bailouts.

Now consider the people who showed up in a state of generalized rage in Washington over the weekend. They have no leaders, save a self-described rodeo clown — Glenn Beck of Fox News — and some well-funded Astroturf outfits from the permanent lobbying class inside the Beltway. They are loosely organized under a Tea Party movement, but these people are closer to British Tories than 18th century patriots with a love of equality.

And they have the wrong target.

Mark Williams, a Sacramento talk radio host, was speaking to CNN on behalf of the demonstrators — many of whom carried signs comparing Obama to a witch doctor, an undocumented worker or a Nazi — when he played the blue collar card.

Who is Williams? A garden variety demagogue who calls Obama “an Indonesian Muslim turned welfare thug” and the Democratic party “a domestic enemy” of America. He also refers to the president as “racist in chief.” That says all you need to know about leaders of the Tea Party movement.

Williams repeatedly invoked the “working stiffs” who feel left out. Working people are always the last to get aboard the gravy train, and the first to be used in campaigns that will not advance their cause. And with these demonstrators, and the hucksters trying to distract them from real issues, history repeats itself.

Where was the Tea Party movement when the tax burden was shifted from the high end to the middle? Where were the patriots when Wall Street, backed in Congress by Senator Phil Gramm of Texas, rewrote securities laws so that the wonder boys of Lehman and A.I.G. could reduce home mortgages to poker chips at a trillion-dollar table?

Where were the angry “stiffs” when the banking industry rolled the 2005 Congress into rewriting bankruptcy law, making it easier to keep people in permanent credit card hock?

Where were they when President Bush started the bailouts, with $700 billion that had to be paid on a few days’ notice — with no debate — to save global capitalism?

They were nowhere, because they were clueless, just as most journalists were.

But now, at a time when a new president wants to reform health care to fix the largest single cause of middle-class economic collapse, he’s called a Nazi by these self-described friends of the working stiff.

“A working class hero is something to be,” John Lennon, that product of ragged Liverpool, sang just after leaving the Beatles. “Keep you doped with religion and sex and T.V.”

As someone who had a union card in my wallet before I owned a Mastercard, I don’t share Lennon’s dark view of blue collar workers. But as long as they can be distracted by people who say all government is bad, while turning a blind eye to manipulation at corporate levels, they’re doomed to shouting at phantoms.

One more detail caught my eye in these new economic reports on the lost decade. People in their prime earning years — age 45 to 54 — took the biggest hit in the last years of the Bush Administration, their median income falling by $5,000. And the region that suffered most — the South.

Older southern whites — that’s who got hit hardest by the freewheeling decade now fading. They should be angry. But they’re five years too late.

4 Responses to The Tea Party Parade: Shouting at Phantoms