The Truth About War Between Georgia and Russia 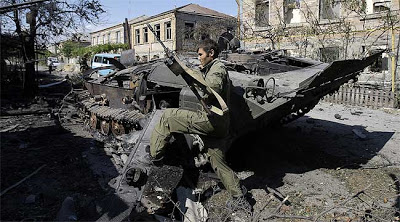 I survived the Georgian war. Here’s what I saw.
By Lira Tskhovrebova / October 8, 2008

Tskhinvali, South Ossetia – In a speech before the United Nations last month, Georgian President Mikheil Saakashvili implored world leaders to set up an international investigation to find out the truth about the war in South Ossetia.

I couldn’t agree more. But I think the results of an honest investigation would reveal a very different “truth” than what President Saakashvili claims.

I know this because I was in Tskhinvali, the capital of South Ossetia, on Aug. 7 when Georgian troops marched into the city and killed my friends and neighbors. I huddled with my family in terror for three nights while Saakashvili’s tanks and rockets destroyed hundreds of our homes, desecrated cemeteries, gutted schools and hospitals.

I also have good reason not to trust what Saakashvili says. For three days before the attack I had been getting calls from many Georgian friends warning me to get out. They said Saakashvili was planning an attack. Most of the Georgians living in South Ossetia left because they knew what was coming.

On the night of Aug. 7, Saakashvili went on television and assured the frightened civilian population of South Ossetia that he would not attack us. This was long after the time Saakashvili now claims Russians had begun “invading” Georgia.

Ossetians went to bed relieved and thankful for a peaceful night.

Less than two hours later, according to credible international accounts, his artillery, bombers, and three brigades of ground troops unleashed what I can only describe as a fierce hell on our city. In the moment, we knew only our fear as we hid. Afterward I spoke with hundreds of Ossetians to find out what was done to us.

My friend’s elderly father tried to douse the flames set by Georgian fire on the home he had built with his hands. His leg was severed by shrapnel from Georgian weapons. He bled to death while his disabled wife crawled from their burning home.

Ossetians saw Georgian tanks firing into basements where women and children hid for safety They saw fleeing families shot down by Georgian snipers. We learned that the Georgian military had used Grad rocket systems and cluster bombs against Tskhinvali.

Yes, I would very much like to see an international commission investigate the truth of what happened.

When I came out from hiding, thanking God that the Russians had saved our lives, I was dismayed by the reaction of the international media to what had happened. There was nothing about Ossetian deaths and the unprovoked horrors inflicted by Saakashvili’s military. It made my heart sick.

The truth has been crushed by Georgia’s powerful public relations machine as mercilessly as Georgian tanks rolled over the defenseless civilians of Tskhinvali.

I know that Americans are a generous and fair people. But Americans haven’t been told the truth about what happened to us. Americans don’t understand that Ossetians are an independent, Christian Orthodox people with a deep history in our land. The world talks only about Georgian freedom. What of freedom for my people? Does our suffering, do our voices, mean nothing?

I don’t blame the Georgian people for what happened to us. The vast number of Ossetians and Georgians want to live in peace. I blame Georgia’s leaders.

Saakashvili has persuaded the world that he is a “beacon” of democracy and openness. But he won’t even tell his own people the truth. My Georgian friends weren’t allowed to see any Russian news sites during the conflict because all of those sites were blocked by Saakashvili’s government.

I know we are a small people, and I make no claim to understanding the experts in geopolitics with their theories and pronouncements about the great powers. But I have fought for women’s rights in Ossetia for 12 years and I believe in the truth.

In a recent article, Saakashvili cynically dismissed Ossetian suffering and deaths because, he said, Russia had “lied” about how many of my people were killed by the Georgian military.

It breaks my heart to even engage in this discussion. No one – including Saakashvili – knows how many Ossetians were killed by his Army. I have friends who buried loved ones in their backyards because there were no alternatives. Many people are still missing.

Does Saakashvili believe his vicious attack on a civilian city was justified if he only killed a few hundred rather than a few thousand? Do Americans realize that a military trained and equipped by the US government attacked a civilian population as they slept in their beds? Can they justify sending another billion dollars to Georgia and nothing for those Georgia attacked?

I have made an urgent appeal to the world for humanitarian relief for our people at the website helpossetianow.org. I beg the United States and the world to find out the truth. Please hear our voices.

• Lira Tskhovrebova is the founder of the Association of South Ossetian Women for Democracy and Human Rights and has worked for more than a decade to improve relations between people of Georgian and Ossetian descent in the Caucasus.

This entry was posted in RagBlog and tagged Georgia, South Ossetia, War Crimes. Bookmark the permalink.