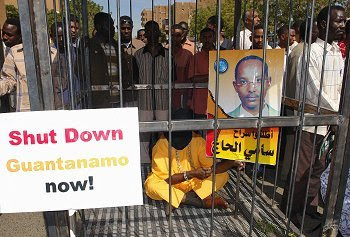 Al-Jazeera Journalist Freed From Guantanamo After 6 Years
by Mohamed Osman / May 2, 2008

An Al-Jazeera cameraman was released from U.S. custody at Guantanamo Bay and returned home to Sudan early Friday after six years of imprisonment that drew worldwide protests.

Sami al-Haj, who had been on a hunger strike for 16 months, grimaced as he was carried off a U.S. military plane by American personnel in Sudan’s capital, Khartoum. He was put on a stretcher and taken straight to a hospital.

Al-Jazeera showed footage of al-Haj being carried into the hospital, looking feeble and with his eyes closed, but smiling. Some of the men surrounding his stretcher were kissing him on the cheek.

“Thank God … for being free again,” he told Al-Jazeera from his hospital bed. “Our eyes have the right to shed tears after we have spent all those years in prison. … But our joy is not going to be complete until our brothers in Guantanamo Bay are freed,” he added.

“The situation is very bad and getting worse day after day,” he said of conditions in Guantanamo. He claimed guards prevent Muslims from practicing their religion and reading the Quran.

“Some of our brothers live without clothing,” he said.

The U.S. military says it goes to great lengths to respect the religion of detainees, issuing them Qurans, enforcing quiet among guard staff during prayer calls throughout the day. All cells in Guantanamo have an arrow that points toward the holy city of Mecca.

Al-Haj was released along with two other Sudanese from Guantanamo Thursday. He was the only journalist from a major international news organization held at Guantanamo and many of his supporters saw his detention as punishment for a network whose broadcasts angered U.S. officials.

The military alleged he was a courier for a militant Muslim organization, an allegation his lawyers denied.

Al-Haj said he believed he was arrested because of U.S. hostility toward Al-Jazeera and because the media was reporting on U.S. rights violations in Afghanistan.

Read all of it here. / Common Dreams / AP