The US Does Not Really Have a Foreign Policy 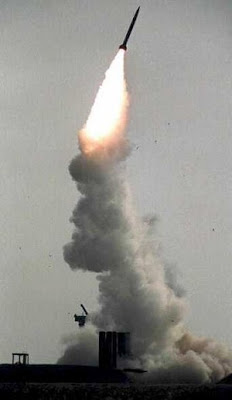 The US missile defence system is the magic pudding that will never run out
By George Monbiot / August 19, 2008

It’s a novel way to take your own life. Just as Russia demonstrates what happens to former minions that annoy it, Poland agrees to host a US missile defence base. The Russians, as Poland expected, respond to this proposal by offering to turn the country into a parking lot. This proves that the missile defence system is necessary after all: it will stop the missiles Russia will now aim at Poland, the Czech Republic and the UK in response to, er, their involvement in the missile defence system.

The American government insists that the interceptors, which will be stationed on the Baltic coast, have nothing to do with Russia: their purpose is to defend Europe and the US against the intercontinental ballistic missiles Iran and North Korea don’t possess. This is why they are being placed in Poland, which, as every geography student in Texas knows, shares a border with both rogue states.

They permit us to look forward to a glowing future, in which missile defence, according to the Pentagon, will “protect our homeland … and our friends and allies from ballistic missile attack”; as long as the Russians wait until it’s working before they nuke us. The good news is that, at the present rate of progress, reliable missile defence is only 50 years away. The bad news is that it has been 50 years away for the past six decades.

The system has been in development since 1946, and so far it has achieved a grand total of nothing. You wouldn’t know it if you read the press releases published by the Pentagon’s missile defence agency: the word “success” features more often than any other noun. It is true that the programme has managed to hit two out of the five missiles fired over the past five years during tests of its main component, the ground-based midcourse missile defence (GMD) system. But, sadly, these tests bear no relation to anything resembling a real nuclear strike.

All the trials run so far – successful or otherwise – have been rigged. The target, its type, trajectory and destination, are known before the test begins. Only one enemy missile is used, as the system doesn’t have a hope in hell of knocking down two or more. If decoy missiles are deployed, they bear no resemblance to the target and they are identified as decoys in advance. In order to try to enhance the appearance of success, recent flight tests have become even less realistic: the agency has now stopped using decoys altogether when testing its GMD system.

This points to one of the intractable weaknesses of missile defence: it is hard to see how the interceptors could ever outwit enemy attempts to confuse them. As Philip Coyle – formerly a senior official at the Pentagon with responsibility for missile defence – points out, there are endless means by which another state could fool the system. For every real missile it launched, it could dispatch a host of dummies with the same radar and infra-red signatures. Even balloons or bits of metal foil would render anything resembling the current system inoperable. You can reduce a missile’s susceptibility to laser penetration by 90% by painting it white. This sophisticated avoidance technology, available from your local hardware shop, makes another multibillion component of the programme obsolete. Or you could simply forget about ballistic missiles and attack using cruise missiles, against which the system is useless.

Missile defence is so expensive and the measures required to evade it so cheap that if the US government were serious about making the system work it would bankrupt the country, just as the arms race helped to bring the Soviet Union down. By spending a couple of billion dollars on decoy technologies, Russia would commit the US to trillions of dollars of countermeasures. The cost ratios are such that even Iran could outspend the US.

The US has spent between $120bn and $150bn on the programme since Ronald Reagan relaunched it in 1983. Under George Bush, the costs have accelerated. The Pentagon has requested $62bn for the next five-year tranche, which means that the total cost between 2003 and 2013 will be $110bn. Yet there are no clear criteria for success. As a recent paper in the journal Defense and Security Analysis shows, the Pentagon invented a new funding system in order to allow the missile defence programme to evade the government’s usual accounting standards. It’s called spiral development, which is quite appropriate, because it ensures that the costs spiral out of control.

Spiral development means, in the words of a Pentagon directive, that “the end-state requirements are not known at programme initiation”. Instead, the system is allowed to develop in whatever way officials think fit. The result is that no one has the faintest idea what the programme is supposed to achieve, or whether it has achieved it. There are no fixed dates, no fixed costs for any component of the programme, no penalties for slippage or failure, no standards of any kind against which the system can be judged. And this monstrous scheme is still incapable of achieving what a few hundred dollars’ worth of diplomacy could do in an afternoon.

So why commit endless billions to a programme that is bound to fail? I’ll give you a clue: the answer is in the question. It persists because it doesn’t work.

US politics, because of the failure by both Republicans and Democrats to deal with the problems of campaign finance, is rotten from head to toe. But under Bush, the corruption has acquired Nigerian qualities. Federal government is a vast corporate welfare programme, rewarding the industries that give millions of dollars in political donations with contracts worth billions. Missile defence is the biggest pork barrel of all, the magic pudding that won’t run out, however much you eat. The funds channelled to defence, aerospace and other manufacturing and service companies will never run dry because the system will never work.

To keep the pudding flowing, the administration must exaggerate the threats from nations that have no means of nuking it – and ignore the likely responses of those that do. Russia is not without its own corrupting influences. You could see the grim delight of the Russian generals and defence officials last week, who have found in this new deployment an excuse to enhance their power and demand bigger budgets. Poor old Poland, like the Czech Republic and the UK, gets strongarmed into becoming America’s groundbait.

If we seek to understand American foreign policy in terms of a rational engagement with international problems, or even as an effective means of projecting power, we are looking in the wrong place. The government’s interests have always been provincial. It seeks to appease lobbyists, shift public opinion at crucial stages of the political cycle, accommodate crazy Christian fantasies and pander to television companies run by eccentric billionaires. The US does not really have a foreign policy. It has a series of domestic policies which it projects beyond its borders. That they threaten the world with 57 varieties of destruction is of no concern to the current administration. The only question of interest is who gets paid and what the political kickbacks will be.

This entry was posted in RagBlog and tagged The World, U.S. Government, U.S. Military, World Opinion. Bookmark the permalink.