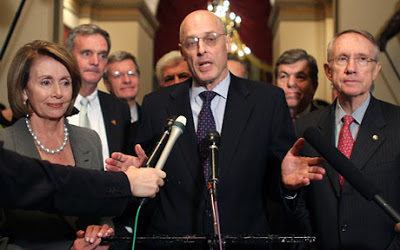 Treasury Secretary Henry Paulson and Friends announcing terms of the bailout.
In Praise of a Rocky Transition
By Naomi Klein / November 13, 2008

The more details emerge, the clearer it becomes that Washington’s handling of the Wall Street bailout is not merely incompetent. It is borderline criminal.

In a moment of high panic in late September, the US Treasury unilaterally pushed through a radical change in how bank mergers are taxed–a change long sought by the industry. Despite the fact that this move will deprive the government of as much as $140 billion in tax revenue, lawmakers found out only after the fact. According to the Washington Post, more than a dozen tax attorneys agree that “Treasury had no authority to issue the [tax change] notice.”

Of equally dubious legality are the equity deals Treasury has negotiated with many of the country’s banks. According to Congressman Barney Frank, one of the architects of the legislation that enables the deals, “Any use of these funds for any purpose other than lending–for bonuses, for severance pay, for dividends, for acquisitions of other institutions, etc.–is a violation of the act.” Yet this is exactly how the funds are being used.

Then there is the nearly $2 trillion the Federal Reserve has handed out in emergency loans. Incredibly, the Fed will not reveal which corporations have received these loans or what it has accepted as collateral. Bloomberg News believes that this secrecy violates the law and has filed a federal suit demanding full disclosure.

Despite all of this potential lawlessness, the Democrats are either openly defending the administration or refusing to intervene. “There is only one president at a time,” we hear from Barack Obama. That’s true. But every sweetheart deal the lame-duck Bush administration makes threatens to hobble Obama’s ability to make good on his promise of change. To cite just one example, that $140 billion in missing tax revenue is almost the same sum as Obama’s renewable energy program. Obama owes it to the people who elected him to call this what it is: an attempt to undermine the electoral process by stealth.

Yes, there is only one president at a time, but that president needed the support of powerful Democrats, including Obama, to get the bailout passed. Now that it is clear that the Bush administration is violating the terms to which both parties agreed, the Democrats have not just the right but a grave responsibility to intervene forcefully.

I suspect that the real reason the Democrats are so far failing to act has less to do with presidential protocol than with fear: fear that the stock market, which has the temperament of an overindulged 2-year-old, will throw one of its world-shaking tantrums. Disclosing the truth about who is receiving federal loans, we are told, could cause the cranky market to bet against those banks. Question the legality of equity deals and the same thing will happen. Challenge the $140 billion tax giveaway and mergers could fall through. “None of us wants to be blamed for ruining these mergers and creating a new Great Depression,” explained one unnamed Congressional aide.

More than that, the Democrats, including Obama, appear to believe that the need to soothe the market should govern all key economic decisions in the transition period. Which is why, just days after a euphoric victory for “change,” the mantra abruptly shifted to “smooth transition” and “continuity.”

Take Obama’s pick for chief of staff. Despite the Republican braying about his partisanship, Rahm Emanuel, the House Democrat who received the most donations from the financial sector, sends an unmistakably reassuring message to Wall Street. When asked on This Week With George Stephanopoulos whether Obama would be moving quickly to increase taxes on the wealthy, as promised, Emanuel pointedly did not answer the question.

This same market-coddling logic should, we are told, guide Obama’s selection of treasury secretary. Fox News’s Stuart Varney explained that Larry Summers, who held the post under Clinton, and former Fed chair Paul Volcker would both “give great confidence to the market.” We learned from MSNBC’s Joe Scarborough that Summers is the man “the Street would like the most.”

Let’s be clear about why. “The Street” would cheer a Summers appointment for exactly the same reason the rest of us should fear it: because traders will assume that Summers, champion of financial deregulation under Clinton, will offer a transition from Henry Paulson so smooth we will barely know it happened. Someone like FDIC chair Sheila Bair, on the other hand, would spark fear on the Street–for all the right reasons.

One thing we know for certain is that the market will react violently to any signal that there is a new sheriff in town who will impose serious regulation, invest in people and cut off the free money for corporations. In short, the markets can be relied on to vote in precisely the opposite way that Americans have just voted. (A recent USA Today/Gallup poll found that 60 percent of Americans strongly favor “stricter regulations on financial institutions,” while just 21 percent support aid to financial companies.)

There is no way to reconcile the public’s vote for change with the market’s foot-stomping for more of the same. Any and all moves to change course will be met with short-term market shocks. The good news is that once it is clear that the new rules will be applied across the board and with fairness, the market will stabilize and adjust. Furthermore, the timing for this turbulence has never been better. Over the past three months, we’ve been shocked so frequently that market stability would come as more of a surprise. That gives Obama a window to disregard the calls for a seamless transition and do the hard stuff first. Few will be able to blame him for a crisis that clearly predates him, or fault him for honoring the clearly expressed wishes of the electorate. The longer he waits, however, the more memories fade.

When transferring power from a functional, trustworthy regime, everyone favors a smooth transition. When exiting an era marked by criminality and bankrupt ideology, a little rockiness at the start would be a very good sign.

Naomi Klein is an award-winning journalist and syndicated columnist and the author of the international and New York Times bestseller The Shock Doctrine: The Rise of Disaster Capitalism (September 2007); an earlier international best-seller, No Logo: Taking Aim at the Brand Bullies; and the collection Fences and Windows: Dispatches from the Front Lines of the Globalization Debate (2002).