The War on Drugs: Manufacturing Its Own Enemies 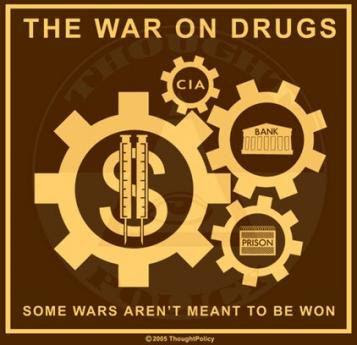 In plain English: Why the drug war is a crime against humanity explained
By Carmen Yarrusso / August 9, 2008

Like the Iraq war and the “war on terror”, the so-called “drug war” is a government contrived “war” based on lies that generates massive profits for a few while causing massive suffering for many.

The drug war is futile by design (and thus never-ending) because it doesn’t “fight” drugs—quite the contrary—it strongly encourages production and distribution of prohibited drugs by guaranteeing extremely high profits.

But the most insidious and evil aspect of the drug war is it manufactures its own enemies by criminalizing the most basic of human rights—the right of sovereignty over your own body. The drug war could not exist without first inventing a bogus crime.

Our government wastes billions of tax dollars each year harassing and jailing millions of decent, productive Americans for a government-invented “crime”. The use of drugs (even dangerous drugs like alcohol and nicotine) simply doesn’t meet any reasonable definition of “crime”.

If you use certain drugs, our government claims you’re both a criminal and a victim at the same time. Since the perpetrator can’t be separated from the victim, the victim is further punished for the “crime”. This pathetic perversion of justice is vigorously championed by our government for selfish political reasons.

More than 50 government agencies share billions of your tax dollars each year “fighting” a government-created crime. Of the millions of illegal drug users, the vast majority use marijuana. If marijuana were legal like alcohol, these government agencies would suddenly lose billions of dollars because millions of former “criminals” would suddenly be granted sovereignty over their own bodies. The vast army amassed to fight the drug war would need to be dissolved at great cost.

That’s why our government strongly opposes even honest debate about marijuana legalization because this massive money-making scam would soon end.

Ingesting nicotine, alcohol, fatty foods, or certain drugs may be unwise. But why is it a crime? If a drug user or a non-drug user harms another they should be treated equally. But the bogus “crime” of drug use doesn’t require harming anyone. Nor does it require a victim and a perpetrator. It only requires a government-invented, bogus criminal/victim, a drug user.

By using lies and deception our government convinces gullible Americans that simply putting something into your own body is a serious crime. But evidence clearly shows that nearly all the harm associated with drug use is caused by creating the bogus crime, not from the actual drug use. There are millions of drug users, but relatively few are harmed by their drug use. These few should be patients, not criminals.

But it’s not just the millions arrested for drug use who suffer from this gross injustice. We gullible Americans have allowed our government to invent a bogus crime that causes massive misery worldwide while costing the taxpayers billions.

Consider the following list of easily avoidable human tragedies that are the direct result of a government-invented, bogus crime: A tax-free, unregulated, multi-billion-dollar drug industry necessarily run by violent criminals; a giant law enforcement bureaucracy wasting billions in a futile attempt to curtail this drug industry, which, in fact, guarantees its extreme profitability; a deteriorating public education system robbed of billions to support this law enforcement bureaucracy; courts and prisons overflowing with non-violent “criminals” while murderers, rapists and real criminals go free; tens of thousands of children enduring the suffering and stigma of having one or both parents in jail for a bogus “crime”; the gradual erosion of our Constitution as more and more civil liberties are sacrificed to fight a crime “made in USA.”; rampant corruption of foreign governments (like Mexico and Columbia), so driven by US drug profits that life and human rights are secondary; thousands of adults and children infected and dying from HIV because distributing clean needles is a “crime”; violent street gangs with little incentive for education or legitimate jobs reaping huge drug profits made possible by a bogus crime; a growing death toll from police breaking down doors to catch people using substances less dangerous than tobacco, alcohol or fatty foods; a growing cynicism and disrespect for all laws and authority fueled by the knowledge our government can arbitrarily invent a bogus crime…

We’re appalled when Islamic regimes invent bogus crimes against reading certain books, or listening to certain music. Using certain drugs is our government’s version of the same thing. But the worldwide consequences of US drug prohibition are far more serious and severe. All of these “crimes” lack the moral basis of real crime. All are clear cases of a repressive government dictating the private personal behavior of its citizens.

If real crime is knowingly causing harm to others, then the real crime here is not drug use, but making drug use a “crime”. And the real criminals are not drug users, but ordinary people like us, who sit back and condone a ruthless scam that has been exported and exploited around the world leaving massive human suffering in its wake.

This entry was posted in RagBlog and tagged Bush Administration, War on Drugs. Bookmark the permalink.

2 Responses to The War on Drugs: Manufacturing Its Own Enemies