The War on Terror Meets the War on Immigrants 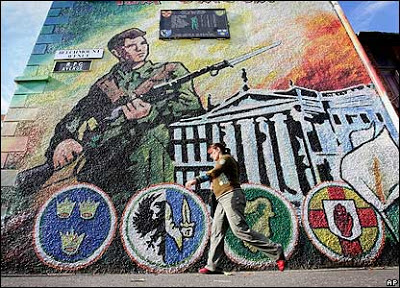 Twenty-six years ago, Pol Brennan was an Irish Republican Army (IRA) prisoner in the H-Blocks of Long Kesh, watching his friends die on hunger strike. Today, he is in solitary confinement in a Texas immigration holding center.

His story reveals a great deal about the evolving Anglo-American attitude toward the IRA wrought by the Northern Ireland Peace Process. It is also where the war on “terrorism” meets the war on immigrants in the United States.

Pol Brennan was born in 1953 in one of the poorest neighborhoods of Belfast, Northern Ireland. While growing up, being detained and beaten by British soldiers or the pro-British police force was almost routine. By 1972, when he was 19, like many of his generation, he joined the IRA to end British rule in Northern Ireland.

In 1976, Brennan was convicted of possessing explosives and immediately joined the blanket protest in the H-Blocks of Long Kesh prison. Here, IRA men refused to wear the prison uniform, demanding to be recognized, rightly, as political prisoners. They lived for years in cold prison cells, covered in nothing but a blanket.

Brennan shared a cell with Bobby Sands, the first man to die on the 1981 hunger strike for political status. As 10 men died, he lost several other friends. Along with British miners, Irish hunger strikers were on the vicious cutting edge of the Thatcher regime’s attack on working people everywhere.

In 1983, two years after the hunger strike ended, Brennan was one of 38 IRA prisoners who escaped from the H-Blocks. It was the largest prison break in British history from Her Majesty’s Prison Maze, considered one of the most secure prisons in Europe.

Pol made his way to the Bay Area, where he met and married Joanna Volz, a U.S. citizen. They lived quietly until January 1993, when federal agents arrested Brennan on a British extradition warrant. He was forced to spend more than seven years fighting extradition, and was imprisoned for three of those years, half the time in a building with no windows. A campaign to block his extradition received wide support, with Noam Chomsky, Christy Moore and Alexander Cockburn among the many who spoke out on his behalf.

The British government finally withdrew its extradition request in October 2000. By that time, Northern Ireland had changed dramatically. The IRA had ended its war. Sinn Fein, the main Republican political party, had agreed to govern Northern Ireland in coalition with Unionist political parties whose bottom line has always been preserving British rule in Ireland. In this new environment, Britain released IRA prisoners and withdrew its extradition requests.

The U.S. government also dramatically changed its attitude toward the IRA. In response to the 1994 IRA ceasefire, it suspended deportation proceedings against some former Republican prisoners. However, even after the extradition request was withdrawn, Pol Brennan still faced deportation proceedings. But they were put on hold while his application for political asylum was pending.

Pol, Joanna and her daughter Molly were able to live a peaceful and relatively normal life in the Bay Area. He worked legally as a carpenter, she as a legal clerk with the public defender’s office. Brennan was able to indulge his passion for astronomy by volunteering at the local planetarium. The couple adopted two whippets. They named one Marley, after Pol’s late friend Larry Marley, the architect of the escape from Long Kesh.

Their normal life was suddenly interrupted on January 26. Brennan and Volz were driving from Oakland to Texas to visit her relatives when they were stopped at an immigration checkpoint, 100 miles inside the U.S. border. Brennan produced his work authorization, but the two were detained because it had expired. Brennan was able to reach his lawyer, who faxed the Border Patrol agents documentation that he had an asylum case pending and had applied to renew the work permit.

But the agents ran Brennan’s name through their computers and came up with the 1983 escape from Long Kesh. Brennan says, “They acted as if they had caught the terrorist al-Zarqawi, as they as they huddled around their computer screens. Their little eyes were jiggling in their heads with excitement.”

The Border Patrol agents ignored the evidence faxed to them by Brennan’s lawyer. As Brennan describes it, “They said, ‘Well, just because you have an application pending doesn’t mean you have a legal right to be in the United States. So we are going to detain you.’”

Pol Brennan was taken to the Port Isabel Detention Center in Los Fresnos in southern Texas. He was initially placed in the general population with men from Central and South America, Trinidad and Jamaica, and even Palestine.

Brennan was soon moved to solitary confinement, because, apparently, he was considered an escape risk since he broke out of Long Kesh 25 years earlier. It was as if they expected the IRA to invade South Texas to free him.

Today, Pol is locked in a cell 23 hours a day. He spends the other hour in the TV room. He sustains himself with books and phone calls to the outside world. When it is his turn to use the phone, the guards bring it on a trolley and hand it to him through the cell door. Brennan then has to hold the phone at an angle and punch in the 10-digit code for the prison phone system. He can only make collect calls or use a phone card.

Joanna Volz has moved to Texas, where she can be near Pol. She visits for half an hour once a week. They talk through a telephone, separated by a plastic wall. Sometimes, he has been handcuffed throughout the visit.

An immigration judge denied Brennan bail, saying he is a “flight risk” and “a danger to the community.” The judge, who is notoriously anti-immigrant, ignored numerous letters of support from the Bay Area, including one from Brennan’s employer saying his job was being held open for him. Brennan was deemed a “flight risk” despite the fact that he had twice reported back to prison in California after his bail was revoked.

Now Brennan will have to go through a pro-forma hearing before the same judge on his political asylum application. From there, he will go to the Board of Immigration Appeals and, if necessary, to the Court of Appeals. He will almost certainly remain in prison at least through September.

Pol Brennan is collateral damage in the war on “terrorism.” His 32-year-old IRA conviction and the escape from Long Kesh are keeping him from receiving a green card or U.S. citizenship. In the present political climate, unlike when the IRA declared its ceasefire, there is no great urgency to helping former Republican prisoners.

Brennan is also a victim, like many millions of others, of the U.S. government’s anti-immigrant dragnet. Pol was stopped at the immigration checkpoint because the Department of Homeland Security hadn’t renewed his work authorization. His bail application was refused by an immigration judge so biased that he routinely rules against all immigrants, even Cubans.

Now, Brennan’s asylum application will almost certainly be decided by the Board of Immigration Appeals. Pol describes what’s happening to immigrants in this situation:

Regretfully, current policy has been shaped by post-9/11 paranoia, and to some extent xenophobia that we can see in such actions as the USA PATRIOT Act and the hundreds of miles of border fencing and walls now under construction along the U.S.-Mexico border.

The vast majority of detainees here are from Central and South America (Mexico included). who suffer the ill effects of U.S. trade, industrial and agricultural policies that undercut key sectors of their home economies and directly necessitate their seeking greener pastures to survive. Meanwhile, my case inches along.

Joanna Volz sums up Pol’s situation: “This is just old news. The war is over. It’s time this was over. The incident Pol was involved in happened 30-odd years ago. But this all keeps repeating itself. It’s like a roundabout. Everybody else is trying to move on, but he’s held back. It’s just not fair.”

The Irish government can certainly demand Brennan’s release and call for an end to deportations proceedings. Born in Belfast, under the Irish Constitution, he is as much an Irish citizen as if he was born in Dublin. The then-Taoiseach (Prime Minister) Albert Reynolds convinced Bill Clinton to let Gerry Adams visit the U.S. over the heated objections of the British government. On April 30, the outgoing Taoiseach, Bertie Ahern, was given the unusual honor of addressing a joint session of Congress.

Ireland’s economic importance to the U.S. should guarantee a hearing. U.S. companies have invested $84 billion in Ireland, more than double the total for China and India combined. In 2005, U.S. exports to Ireland were valued at $9 billion, while Irish exports to the U.S. totaled $28 billion. Unfortunately, the Irish government has shown no interest in fighting for Pol Brennan, and it will require political pressure at home to change their minds.

Popular mobilization and political pressure aimed at both the U.S. and Irish government is the best way to fight for Pol’s release. The California Ancient Order of Hibernians, the largest Irish organization in the U.S., has passed a resolution urging the “Department of Homeland Security to withdraw its opposition to bail and allow Pol Brennan to live and work legally in the U.S, until his political asylum case is adjudicated.” His neighbors in Oakland are pressing his Congresswoman, Barbara Lee, to intervene.

What you can do

For more information on Pol Brennan’s case and to find out how you can show your support, go to the Pol Brennan Support Web site. Supporters are circulating an online petition demanding that Pol not be deported from the U.S.

Sandy Boyer is the co-host of Radio Free Eireann on WBAI in New York City and a veteran organizer for Irish political prisoners. Shaun Harkin is an immigrant rights activist in Chicago and contributor to Socialist Worker.

This entry was posted in RagBlog and tagged Homeland Security, Immigration. Bookmark the permalink.