The Women of Bolivia : A Reason to Celebrate 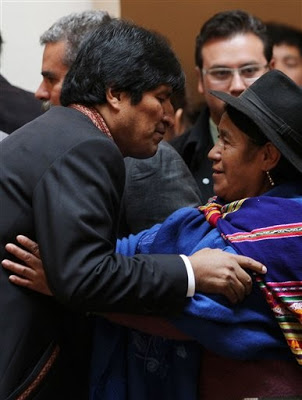 LA PAZ, Bolivia — Usually my birthday message, on International Working Women’s Day, is a report of little progress for women. This year is different. This year women have something to celebrate as do I.

The country of Bolivia has a new Constitution which in part frees women from the yoke of Catholicism, and a new way to govern, which includes women at all levels of government.

The women of La Paz, a double victory

In the early 19th Century, Bolivian women fought alongside men for the country’s independence from colonial Spain. They stormed into battle on horseback, seized cities and were on the front line. But their presence on the battlefield did not translate into presence in the political life of their nation. For many, their education, job opportunities and political rights were limited — until now. 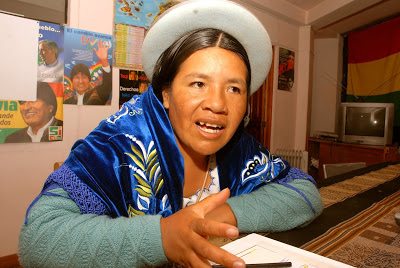 Justice Minister Nilda Copa. Photo by Chávez / IPS.
Recently appointed Justice Minister, Nilda Copa, who started her political career as a trade unionist told the BBC at her office, “for a long time, we women have been excluded — it was one of the dark legacies of the colonial model. I remember my mother didn’t know how to read and write, neither did my grandmother… not because they didn’t want to learn.”

Ms. Copa joined a trade union very young, when she was only 16, because she felt a drastic change was needed and that was the only platform where women “had some voice.”

And that change seems to have arrived. Today, posters proclaiming the slogans of female Bolivian heroes such as indigenous rebel Bartolina Sisa and independence icon Juana Azurduy plaster the walls of several ministries. That shows the fervor felt in the Bolivia of President Evo Morales, who seems to be changing things not only for the country’s indigenous majority, but also for its women.

Half of Mr. Morales’s new cabinet is made up of women.

Today women are involved in running the country as never before. Mr. Morales began his second mandate last month with a cabinet reshuffle that complies with the gender parity stated in the new constitution he pushed for. Now the new cabinet has 10 men and 10 women, three of them indigenous.

“There used to be a lot of racism and machismo. There is still some, but now that structure is changing thanks to brother Evo Morales,” Ms Copa says. “Today, for example, there are no illiterate women, but women with enough capacity to develop activities at the same level as men. But the fight has been harsh and long.”

Her voice trails off and she focuses on a picture of her and Mr. Morales from the times when she was a member of the assembly that wrote Bolivia’s new constitution. 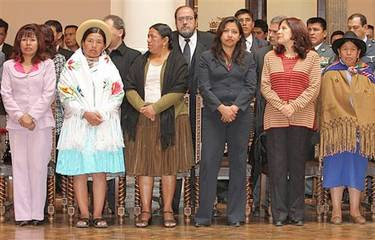 For Mr. Morales, achieving gender parity in the cabinet was a long-held aim. “One of my dreams has come true — half the cabinet seats are held by women,” Mr. Morales said recently. “This is homage to my mother, my sister and my daughter.”

Mr. Morales said that since his early days as a leader of the coca trade union, he had always worked towards getting women into decision-making posts based on the chacha warmi, a concept that in the local Aymara indigenous culture means that men and women are complementary in an egalitarian way.

Ms. Montano believes women have been key supporters of Mr. Morales. But another sign that women’s political influence is on the rise is the fact that they now occupy an unprecedented 30% of seats in Bolivia’s new legislative branch. One of them is Gabriela Montano, a senator who represents the eastern city of Santa Cruz — Bolivia’s opposition heartland — on behalf of Mr. Morales’s party, the “Movement towards Socialism” (MAS). 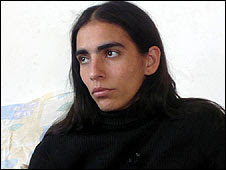 Senator Gabriela Montano. Photo from BBC.
Ms Montano was the subject of several physical attacks during her stint as the government’s envoy to Santa Cruz, and last year she was kept at a secret location as a safety precaution after she was threatened by opposition groups.

“The awakening of women has been brewing for a while. Women have been a key element in the consolidation of this process of change led by President Morales, from the rallies, the protests, the fights. Now, they will be a key element in affairs of national interest,” Ms Montano says.

However, while change for women is under way, for some there is still a long way to go until full equality is achieved. “Not long ago, 10 years ago, nobody talked about women in power in this country, that was unimaginable,” explains Katia Uriona, of the women’s advocacy group Coordinadora de la Mujer. “And even if I applaud all of these victories, I am aware this is not enough. Now we have to see if all of this is translated into something concrete that will truly change the gender face of this country.

The new Constitution removes Catholicism, as the state religion. Catholic classes will no longer be taught in schools.

This is another victory for the women of Bolivia. The Pope of Rome and the Cult of the Virgin have long served to oppress the women of South America, (and much of the rest of the world). The denial of human rights such as the right of control over a woman’s own body has been an impediment to the progress of women.

That is no longer so in Bolivia. This second victory for women is enshrined in the new Constitution written with the participation of women. Unlike the U.S. Constitution, here women still don’t have equal rights under the Constitution.

And a personal victory

70 in a row and still counting.

2 Responses to The Women of Bolivia : A Reason to Celebrate