The World After AIG : Obama and the Economy 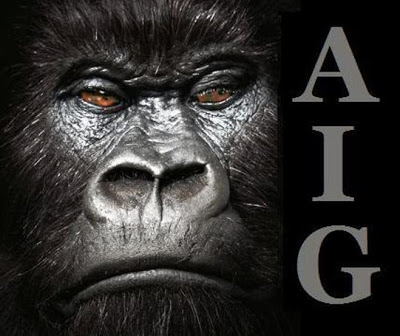 It is not unreasonable to expect that the AIG Bonuses scandal will win some converts for the Republicans’ take-no-action philosophy. Democrats need to wake up and start reminding the public who created this crisis in the first place.

The furor over AIG’s $165 million in bonuses has killed off any possibility that a new TARP would pass. The elimination of the “Shovel Option,” just pushing money into banks, reduces the ranges of choices available to the administration in dealing with the banking crisis.

It probably removes the possibility that the Democrats could be persuaded to vote to pass a new TARP for the Obama administration. Now there are revelations that someone in the Treasury Department, with the help of Senator Chris Dodd changed legislation affecting bonuses so that these could be issued. The Democrats have again shot themselves in the foot, lending ammunition to the GOP claim that the Democrats are the defenders of Wall Street. All this makes it impossible for the Democrats to sponsor or back another TARP. It would be political suicide.

As Secretary Geithner’s options are narrowed, it is even more important that we progressives not join those demanding that he show his cards while navigating this banking crisis. We know he was dealt a bad hand and must give him room to maneuver.

It is important that progressive journalists and politicians begin explaining how narrow options really are for President Barack Obama, Timothy Geithner and the administration. For example, all the foolish talk about overload and focusing only on the economy overlooks the fact that many non-economic matters have a great bearing on generating recovery. The same natural and political obstacles most likely will prevent us from using this recession/depression from reconstructing the productive elements of our economy so we can better compete in the future. While we dither, the Chinese are preparing to move quickly into higher end types of productivity, challenging even more American jobs when this crisis finally ends.

The political and natural obstacles will naturally increase, so we need to start developing more realistic projections of what reasonable people can expect in four years.

The AIG Bonuses Scandal should have dissipated some of the fears on Wall Street.

There has been a lot of irrational fear, fanned by Republican politicians and conservative pundits, that the “nationalization” of the banking system was imminent. In fact, the Obama administration has gone to great lengths to avoid this. Now, with the public being almost totally adverse to more taxpayer bailouts of the banks, this fear should subside.

There was one legitimate fear that now can dissipate. Large banks that compete with those likely to have had massive federal help had legitimate worries about effectively competing with those in the federal ER.

Presently, Timothy Geithner is trying to negotiate federal-private partnerships to take the bad assets off bank books. The idea is to get private investors to buy those securities in return for the federal government guaranteeing them against excessive losses. The main participants will be hedge funds, which have substantial experience assigning value to assets and marketing. If there are profits, the taxpayers will participate in them. The Obama Administration must be vague about its bank rescue plans so as not to risk giving away too much information as it negotiates.

The Treasury is also subjecting the big banks to a stress test. The results will reveal the weaknesses of those institutions. After the federal-private partnership has done what it could, the choice seems to be to move bad assets to an aggregator bank, structured as the Reconstruction Finance Corporation or the Resolution Trust Corporation.

The “bad bank” could scoop up all the doubtful assets and hold them on a consignment basis. That takes them off the books of the Big 8 and gets around the problem of giving them a value. Given a little time, many of them could appreciate some in value. It most likely will turn out that some of that paper will cancel itself out because those banks do a lot of dealing with one another.

For dealing with bad assets, we have the 1930s examples of the Reconstruction Finance Corporation — actually created under Hoover and used by Roosevelt — and the more recent example of the Resolution Trust Corporation, which performed so well in marketing assets of doubtful value after the S and L crisis. If some of the banking corporations need restructuring, the FDIC has proven that it has the expertise to make this go smoothly. In the process, it should divide some of them.

Some argue that the huge banks will need cash after disgorging most of their bad assets. If any cash comes, it will have to be FED funds in return for preferred stock. Given the ability of the GOP to block action in the Senate and the unpopularity of cash bailouts for banks, the amount of FED assistance should be limited.

FED funding is a tool that might be better used down the road if another stimulus does not pass or fails. Fed money could then be gotten to local banks through an enlarged Small Business Administration and the credit-providing institutions that grew out of New Deal initiatives. Under some scenarios, GOP-induced gridlock — so long as it is indirect, could well do real damage to the Democrats. In that case, only FED initiatives could be used to reduce promote recovery.

A certain amount of vagueness is necessary in dealing with the banking crisis, and we progressives should not join the chorus of those demanding exact details. We note in the cases of Bank of America and Citi that an important element of the plan is to buy enough time so institutions can slowly write off some bad assets, while perhaps some questionable ones appreciate. Both were restored to enough health that they can clear the books at a rate of about 2% per year. It seems likely that banks tied to the big eight bank holding corporations might not be able to do a great deal of lending if they are as weak as Bank of America and Citi. They account for 64% of all deposits, so we need to find a way of pumping out credit through their member banks, while assuring that those funds do not move upward to cover for bad assets.

This would be a good time to resurrect a Republican suggestion and require that all banks and financial institutions purchase federal insurance on their assets. The near-impossibility of another TARP makes the creation of this safety net necessary. The administration should also see that the FDIC resume collecting fees from member banks — a practice that was neglected in recent years.

Given that possibility, the administration acted wisely to provide more cash to the Small Business Administration to get out money for loans. SBA has been scaled back in recent years, so it will need to ramp up quickly.

President Obama announced that the House Financial Services Committee is preparing legislation so that some sort of resolution corporation can deal with firms not now covered by banking legislation. He said it could deal with future efforts to pay out outrageous bonuses, but the legislation will clearly make contingency plans for restructuring AIG and other non-banking entities should they face failures that could disrupt the economy.

We can expect two new steps to quiet the financial waters. There soon will be restrictions on short selling in the form of the restoration of the up-tick rule. That means speculators will be less successful in driving down bank stocks. The SEC might also change an evaluation rule — the market to market rule — that forces banks to immediately accept the lowest valuation of some assets and then to sell off good assets at low prices to meet capitalization requirements. For that reason, we need to experiment with higher debt to capital ratios in hard times. To we ordinary folks, alterations like these seem counter-intuitive, but there are sound economic models that suggest we give these changes a try.

The AIG Bonuses scandal could also make it tougher for the Republicans to play the economic populist card, posing as the enemy of the banks and Wall Street, their historic constituents. On the other hand, there is a danger that opposition to bank bailouts will extend to future stimulus packages, a development that would pay massive dividends to the practitioners of obstruction and demonization. Only four and five months ago, Republican leaders and pundits were insisting that government not interfere with the compensation of bankers; today the ever-tanned John Boehner was demanding to know what Democrats knew about the AIG bonuses and when they knew it.

Days ago, on March 6, minority leader Boehner led 156 House Republicans in voting for a spending freeze during this recession/depression. It was barely reported in the MSM, which reminds us of a potent weapon ever at the disposal of the folks who brought us into this valley of economic despair.

Thomas Friedman is suggesting that President Obama spend political capital to persuade the nation that another taxpayer bailout for the banks is necessary. That would almost certainly spell political suicide for the Democrats. They — unlike the Republicans, who almost always place themselves first — have consistently been the party of government, willing to vote for unpopular measures that seem necessary. Another TARP would so weaken the president — now down to 59% policy approval according to Pew — that he would be unable to fulfill his promise of health care reform. It is vital for recovery, for the well-being of our citizenry, and for the continued popularity and support of that good and well-intentioned man in the White House.

It remains to be seen if public opposition to more bank bailout legislation will have a spill-over effect, creating insurmountable opposition to future stimulus legislation. If so, this sorry episode will have produced a political bonanza for the GOP. If not, the Democrats should limit the next package to extending unemployment, efforts to get even more credit to small business, and popular shovel-ready projects. Repugnant as it is to me, I would include a provision making it possible to repatriate foreign corporate earnings at an advantageous tax rate. In return, Democrats could demand some provisions to alleviate human suffering. Failing another stimulus package, Democrats could borrow a page from some Republicans and suggest a fourth month payroll tax holiday.

It is not unreasonable to expect that the AIG Bonuses scandal will win some converts for the Republicans’ take-no-action philosophy. Democrats need to wake up and start reminding the public who created this crisis in the first place. Last Sunday, Dick Cheney told a CNN interviewer that the Bush administration had nothing to do with it, and there was no uproar over his clueless remark.

Democrats also need to realize that their success in 2010 and 2012 will depend upon whether then can come together among themselves and pass a straightforward health care program. If the AIG Bonuses Scandal has strengthened the GOP hand even a little, the Democrats should see the necessity of passing health care as part of the budget reconciliation process, where filibusters are supposed to be ruled out. The GOP says that would poison the well. However they have not been cooperative thus far, have denied Obama a honeymoon, and are threatening many filibusters on judicial matters. It should also be remembered that the tax cuts for the rich were passed in 2001 as part of the budget process.

1 Response to The World After AIG : Obama and the Economy