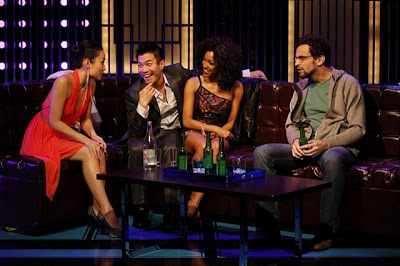 The play — which is part situation comedy, part soap opera, and part prophecy — plays with and deconstructs stereotypes of Americans and Chinese.

Zayd Dohrn’s new 90-minute drama, Outside People, doesn’t advertise any of its influences — and that’s not a criticism. Authors aren’t obligated to make disclosures to audiences about the individuals, the creative works, and the sources that impact their imaginations.

An earlier play, Reborning, that was reviewed in The Rag Blog in 2011, seemed to bear the imprint of his parents, Bernardine Dohrn and William Ayers. His newest work might have been shaped in part by the experience of his wife, Rachel Dewoskin, who lived and worked in China and appeared in a popular Chinese soap opera entitled “Foreign Babes in Beijing.”

Outside People reminded me when I saw it recently at the Vineyard theater in New York — where it’s currently on stage — of two books from the 1950s — Colin Wilson’s The Outsider and Eugene Burdick’s and William Lederer’s The Ugly American.

Dohrn’s 21st-century version of the outsider and the ugly American is named Malcolm and for most of the time that he’s on stage he’s holed up in a hotel room in Beijing, China, all dressed up in jeans and a T-shirt and with nowhere to go but back home, after he’s caused a little mayhem among the locals.

Unlike the American characters in The Ugly American, he isn’t loud and ostentatious and unlike the hero of the novel he doesn’t come to understand and appreciate the needs of the Asians he meets. Dohrn’s Malcolm is shy, quiet, neurotic, and needy in an obnoxious sort of way. He doesn’t look and see or hear and understand.

A twenty-something-year-old kid from New Jersey, he has a diploma from Stanford and a passport from the U.S. State Department that gives him political clout and makes him sexier than he’s ever believed possible. His college buddy, Da Wei, an Americanized Chinese entrepreneur, has brought him to Beijing to repay a social debt incurred while the two young men were undergraduates. It seems that once upon a time Malcolm was outgoing and hospitable.

Two women — the babes of the play — round out the compact cast. Xiao Mei is a Chinese woman from the countryside who has come to Beijing to work and hopefully escape her lot in life as the daughter of peasants. Samanya is the privileged daughter of an African diplomat from the Cameroon who speaks Chinese and feels Chinese, though she doesn’t look Chinese.

They’re all outside people in their own individual ways. Malcolm is way outside his own stomping grounds and his comfort zone. Da Wei, or David as he’s called, is an outsider in his own country after life at Stanford. Indeed, with his foul mouth and his sexual vocabulary — he tells David to stop using “pussy repellant” — he seems more American than Malcolm. 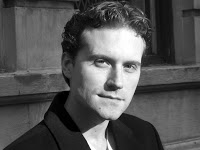 Da Wei is the connector in the group. Samanya is the spark plug who supplies much of the electrical current that keeps the drama on edge. Xiao Mei provides the sex and the sincerity, too. Malcolm offers the key line in the drama when he asks in a state of bemused innocence, “Are we all using one another?” The word “we” is crucial here. Malcolm is all about Malcolm; he’s all about me; “Do it for me,” he tells Xiao Mei when he invites her to go back to America with him.

As the play unfolds, and his layers are peeled away, it’s apparent that he’s really incapable of taking responsibility for his own actions and unable to make “I” statements all, of which makes him not only ugly but dangerous when it comes to personal relationships.

Ambiguity infuses many of Dohrn’s plays and it infuses Outside People. Xiao Mei seems innocent enough; she cries real tears and her heart seems to be broken at the end of the play, but she also appears to be using Malcolm as a stepping stone out of China and into her own version of the American Dream — whether she knows it or not.

Da Wei claims to be Malcolm’s friend, but he also tries to seduce Xiao Mei behind Malcolm’s back, and while he brings the two lovers together he also pushes them apart. If he’s meant to be emblematic of the new Chinese economy, than we’d all better watch our own backs or we’ll lose the shirts that are on them and everything else we own.

The play — which is part situation comedy, part soap opera, and part prophecy — plays with and deconstructs stereotypes of Americans and Chinese. It moves along very quickly with punchy one-liners and real sizzle. The actors — Matt Dellapina as Malcolm, Nelson Lee as Da Wei, Li Jun Li as Xiao Mei, and Sonequa Martin-Green as Samanya — are all good for 90 minutes in a play that has no intermissions.

Portions of the dialogue are in Chinese and with no translation into English. One scene between Da Wei and Xiao Mei even takes place only in Chinese. The audience becomes the outsider here and has to become the insider by listening to the tone of voice and by watching the body language and the facial expressions of the actors.

We’re all outsiders now, Dohrn seems to be saying; we’re all pushed and pulled here and there with little if any psychological or existential advantages attached to the status of the outsider. Once upon a time — back in the 1950s when Colin Wilson wrote the classic The Outsider — it was supposedly cool and hip to be an outsider.

But not now, or so Dohrn’s “Outside People” seems to suggest. Better hold on to your American passport if you don’t want to be on the outs permanently. Moreover, if you want a kind of insurance policy it might be a good idea to learn to speak Chinese and to try to feel at home in Beijing, even if you’re a long way from home.