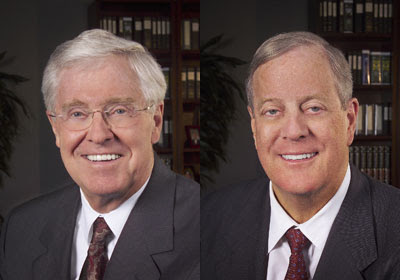 Charles and David: The brothers Koch. Image from AlterNet.
The Kochs vs. Mainstreet:
The right-wing billionaires’
open war on everyday Americans

Koch Industries, the private company of the billionaire Koch brothers Charles and David, is an oil and gas, chemicals, cattle, forestry, and synthetics giant — and also a major force for punishing Main Street Americans. Charles and David Koch (pronounced “coke”) have directed many millions of their shared $43 billion net worth into a vast propaganda machine that’s corrupting American politics in order to reward their pollution-based enterprise.

Since the showdown began two weeks ago, Koch-funded front groups like Americans for Prosperity (AFP) — which is chaired by David Koch — and the American Legislative Exchange Council have organized counter-protests, prepped GOP lawmakers with anti-labor legislative talking points, and even announced an anti-union advertising campaign. For now, however, the AFP message doesn’t appear to be resonating: Koch-backed pro-Walker demonstrations have had low attendance and were dwarfed by pro-union supporters in Madison this week.

In a speech earlier this month at the Conservative Political Action Conference (CPAC), Americans For Prosperity-Michigan Executive Director Scott Hagerstrom revealed the true goal of his group and allies like Walker.

Speaking at CPAC’s “Panel for Labor Policy,” Hagerstrom said that even more than cutting taxes and regulations, AFP really wants to “take the unions out at the knees .” Knee-capping free labor has long been a goal of the Koch brothers and their many front groups. In the run-up to the 2010 elections, the Kochs worked with other anti-labor billionaires, corporations, and activists to fund conservative candidates and groups across the country.

Now after viciously opposing pro-middle class policies for years, Koch Industries is trying to eliminate the only organizations which serve as a counterweight to its well-oiled corporate machine. Believing he was talking with David Koch, Walker told a prankste about his plans to crush the unions. Koch’s AFP operatives are now working with “state officials in Indiana, Ohio, and Pennsylvania to urge them to duplicate Walker’s crusade in Wisconsin.”

According to EPA databases, Koch businesses are huge polluters, emitting thousands of pounds of toxic pollutants. As soon as he got into office, Walker started cutting environmental regulations and appointed a Republican known for her disregard for environmental regulations to lead the Department of Natural Resources. In addition, Walker has stated his opposition to clean energy jobs policies that might draw workers away from Koch-owned interests.

The Koch political poison has spread across the nation. Robocalls from Koch’s Americans for Prosperity group flooded New Hampshire in support of a bill that would repeal participation in the Regional Greenhouse Gas Initiative (RGGI), which has cut greenhouse pollution and created 1,130 jobs as a result of energy efficiency benefits.

Even while local business leaders have called for Walker to end his assault on Wisconsin unions, Koch executives have said that they “will not step back at all” and have pointed to the importance of their “grassroots” group, saying, “it is good to have them on the ground, in the battle, trying to help out.” Rich Fink, the executive vice president of Koch Industries who oversees their ideological campaigns, defended the billionaire brothers in an interview with the National Review Online by blaming “the Left.”

With the Left trying to intimidate the Koch brothers to back off of their support for freedom and signaling to others that this is what happens if you oppose the administration and its allies, we have no choice but to continue to fight.

The Koch brothers, who have been increasing their personal wealth by billions even as they have fired thousands of workers, are really just victims of a vast left-wing conspiracy, Fink claims.

This is part of an orchestrated campaign that has been going on for many months. It involves the Obama administration, the Center for American Progress, aligned left-wing groups, and their friends in the media. This is just the latest salvo in their attacks on the Koch brothers and Koch Industries. But it is an escalation — they’re now bringing in some labor groups, which they have not done before.

Somehow, Rich Fink seems unaware that his own operatives have declared open war on American workers.

[This story was originally published by Think Progress and was distributed by AlterNet.]

1 Response to Think Progress : The Koch Brothers’ War on Mainstreet