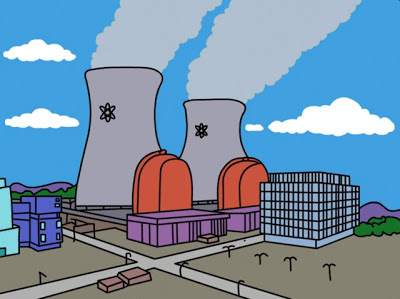 Yet another “perfectly safe” release at Three Mile Island has irradiated yet another puff of hype about alleged “green” support for new reactors.

The two are inseparable.

In 1979, when TMI’s brand new Unit Two melted, stack monitors and other critical safeguards crashed in tandem. Nobody knows how much radiation escaped, where it went or who it harmed. Cancers, leukemia, stillbirths, malformations, asthma, sterility, skin lesions and other radiation-related diseases erupted throughout central Pennsylvania. Some 2400 families sued, but never got a full public hearing in federal court.

Unit Two had operated just three months when it melted. By a 3-1 margin, three central Pennsylvania counties then voted that TMI-One, which opened in 1974, stay shut. But Ronald Reagan tore down that wall.

This week TMI’s owners were forced to evacuate 150 workers when radioactive dust “unexpectedly blew out of a pipe being cut by workers.” Exelon was “trying to determine exactly how and why it happened.”

As always, official announcements emphasize that the public was “in no danger.” That was an epic lie in 1979. This time Exelon’s Ralph DeSantis said things were rapidly “back to normal.”

DeSantis then said radiation could be quickly wiped off protective outfits, while “it takes two to three days for radiation to naturally leave the body of anyone who breathed it in.”

This is a ghastly lie. Among other isotopes, alpha and beta emitters — especially from radioactive dust — can easily lodge in the lungs and other internal organs long enough to damage cells and cause numerous forms of cancer, often lethal.

Ditto the hype about alleged green support for new reactors. Latest is a carefully contrived piece of industry fluff from one Anthony Faiola, whose “Nuclear Power Regains Support” has just been featured atop the Washington Post. This wafer thin installment in the “former environmentalists deem nukes green” series features a Brit named Stephen Tindale who recently left Greenpeace under strained circumstances.

Greenpeace is as anti-nuke as ever. Like Patrick Moore, another former Greenpeacer now hiring out to the nuclear industry, Tindale’s tenure with the organization was stormy, and his defection unsurprising to many still with the group.

But once again the turn of a single activist was a sufficient hook on which to hang a breathless feature.

Faiola cites “only muted opposition” to new reactors in the U.S. while ignoring the inconvenient reality that none are yet licensed for construction. The thousands of “no nukes” arrests in the 1970s and ‘80s came at reactor sites like Seabrook, New Hampshire and Diablo Canyon, California, where construction was already under way.

In fact, today’s safe energy opposition is far beyond corresponding stages when the first reactors were just being proposed. Its decisive advantage comes from true green renewable and efficiency technologies that are four decades further along, and that have all but priced atomic energy wholly out of the marketplace. Only this media-based stab at federal handouts keeps the prospect of new reactors on life support.

Faiola crows that the U.S. Nuclear Regulatory Commission “is reviewing applications for 22 new nuclear plants from coast to coast.” Unmentioned is Toshiba-Westinghouse’s flagship AP-1000 design, which the NRC says can’t withstand an earthquake, hurricane or tornado. Also missing are devastating safety critiques from regulators in Finland, France and Great Britain of the “standardized” reactor being pushed by France’s taxpayer-financed AREVA.

Failoa does cover Al Gore’s harsh assaults on the economic and proliferation problems of atomic energy. He briefly mentions the catastrophic AREVA fiasco at Finland’s Olkiluoto, where construction costs have soared by at least $3 billion. That project is also more than three years behind schedule, with no firm completion date in sight.

Failoa omits the escalating Texas-sized turmoil in San Antonio, whose city council was set to sign on to the construction of a new nuke when it learned the price had jumped by $4 billion — long before the license has been granted.

The story completely skips the DC-based Nuclear Information and Resource Service, which sponsored a statement signed by more than 850 other environmental groups opposing new reactor construction as a proposed means of addressing the climate crisis.

Like this vast core of green groups, Moody’s, Standard & Poor, Citibank and a powerful cohort of financial analysts see atomic power as a horrific investment that can only be described as, well, radioactive. The risks of building a new reactor, says a recent Citibank report, “are so large and variable that individually they could each bring even the largest utility company to its knees.”

But as sure as radiation continues to pour from Three Mile Island, the hype about “green” support for atomic power will continue to spew, while the core of the environmental movement remains staunchly anti-nuke, especially as the price of Solartopian technologies continues to plummet.

“We can meet climate goals with efficiency and renewable technologies that are cheaper and much less risky than new reactors,” says Michele Boyd of Physicians for Social Responsibility.

[Harvey Wasserman’s Solartopia! Our Green-Powered Earth, is at www.harveywasserman.com along with Harvey Wasserman’s History of the U.S. He is senior editor of www.freepress.org, where this article also appears.]