This From the "Too Little, Too Late" Department 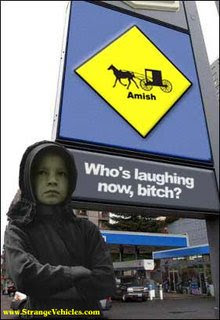 You’ve got to admire these essentially brainless politicians for being so remarkably and densely persistent. Oil production is consistently decreasing year over year, but they know how to resolve the issue: lower the speed limit, again !!!

I’ve withdrawn my support for any of these morons a long time ago. When one of them begins to talk seriously and meaningfully about sustainability, perhaps I will listen. In the meanwhile, good luck in the ensuing chaos.

WASHINGTON – An influential Republican senator suggested Thursday that Congress might want to consider reimposing a national speed limit to save gasoline and possibly ease fuel prices.

Sen. John Warner, R-Va., asked Energy Secretary Samuel Bodman to look into what speed limit would provide optimum gasoline efficiency given current technology. He said he wants to know if the administration might support efforts in Congress to require a lower speed limit.

Congress in 1974 set a national 55 mph speed limit because of energy shortages caused by the Arab oil embargo. The speed limit was repealed in 1995 when crude oil dipped to $17 a barrel and gasoline cost $1.10 a gallon.

As motorists headed on trips for this Fourth of July weekend, gasoline averaged $4.10 a gallon nationwide with oil hovering around $145 a barrel.

Warner cited studies that showed the 55 mph speed limit saved 167,000 barrels of oil a day, or 2 percent of the country’s highway fuel consumption, while avoiding up to 4,000 traffic deaths a year.

“Given the significant increase in the number of vehicles on America’s highway system from 1974 to 2008, one could assume that the amount of fuel that could be conserved today is far greater,” Warner wrote Bodman.

Warner asked the department to determine at what speeds vehicles would be most fuel efficient, how much fuel savings would be achieved, and whether it would be reasonable to assume there would be a reduction in prices at the pump if the speed limit were lowered.

The department’s Web site says that fuel efficiency decreases rapidly when traveling faster than 60 mph. Every additional 5 mph over that threshold is estimated to cost motorists “essentially an additional 30 cents per gallon in fuel costs,” Warner said in his letter, citing the DOE data.

This entry was posted in RagBlog and tagged Congress, Economy, Oil Prices. Bookmark the permalink.

1 Response to This From the "Too Little, Too Late" Department