This Is About Building a More Secure World

I want to know what sort of cynic can possibly tell us that “This is not about being gunrunners. This is about building a more secure world.” We have watched as the evidence accumulated over the past 8 years (actually, thousands of years if one wishes a realistic view) that arming the world does not bring a more secure world – it brings a more violent world and always will. This man should be thrown out onto the battlefield with some of his arms. Let him learn firsthand what security is. 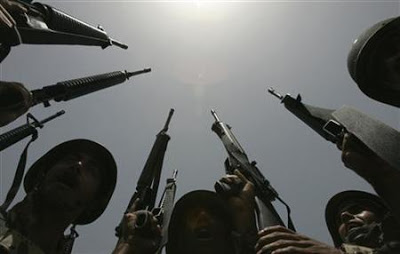 Iraqi soldiers hold their new rifles from the U.S. forces in the Taji U.S. military camp in Baghdad May 13, 2007. REUTERS/Ceerwan Aziz
U.S. in push for foreign arms deals: report
September 14, 2008

NEW YORK — The Bush administration is pushing through a wide range of foreign weapons deals in a bid to rearm Iraq and Afghanistan and contain North Korea and Iran, The New York Times reported.

The deals range from tanks, helicopters and fighter jets to missiles, remotely piloted aircraft and warships, the Times said in its Sunday editions. The weapons and other military equipment foreign sales have totaled more than $32 billion this year, compared with $12 billion in 2005.

While the focus has been on the Middle East, sales extend to northern Africa, Asia, Latin America, Europe and Canada, the Times said.

“This is not about being gunrunners,” the Times quoted Bruce Lemkin, the Air Force deputy undersecretary who has coordinated many of the largest sales, as saying. “This is about building a more secure world.”

In the past two years, Iraq has signed agreements worth more than $3 billion, and also said it planned to buy as much as $7 billion more in U.S. equipment, the Times said. Over the past three years, Washington, the world’s top arms supplier, had agreed to buy more than $10 billion in military equipment and weapons on behalf of Afghanistan, according to Defense Department records, the newspaper said.

Pentagon spokeswoman Lt. Col. Almarah Belk said such deals served the interests of Iraq and the United States because they cut the risk of corruption and helped Iraq “in getting around bottlenecks in their acquisition processes.”

Much of the rearmament in the Gulf has been driven by fears of Iran. The Times said the United Arab Emirates were considering U.S.-made missile defense systems worth as much as $16 billion, while Saudi Arabia had agreed this year to at least $6 billion in weapons purchases from Washington, the most since 1993, and Israel was increasing its orders.

Rep. Howard Berman, chairman of the House Foreign Affairs Committee, said that while he backed many of the weapons sales such as those that helped Iraq defend itself, he worried the spike “could turn into a spiraling arms race that in the end could decrease stability,” the Times said.

Together the countries signed $870 million worth of arms deals with the Bush administration from 2001 to 2004, but in the past four fiscal years the total had increased to $13.8 billion.