Thomas Cleaver to Spineless Democrats : Thanks for Saving my Life 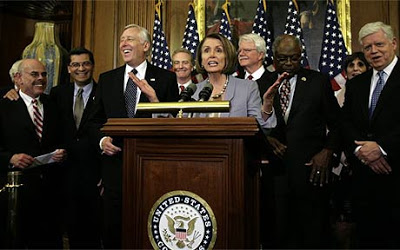 For me, it means I get to live longer than the next six years.

Back in 2007, the doctors found I had the potential for prostate cancer. The news came at the worst possible time. I used to have the gold-plated health insurance of the Writers Guild of America, but that was long gone (when you’re over 40 and you didn’t make them a bazillion dollars, your likelihood of further employment changes for the worse), and it really wouldn’t matter since what exists today for the Guild is a small piece of Swiss cheese that the mice had a serious go at, compared to what used to be.

When they said the “c” word, and I was among the 45 million Americans lacking health insurance, my first thought was why didn’t I just go die — it would be easier. Fortunately, I mentioned the possible diagnosis to friends, who it turned out had faced the same thing, and I discovered prostate cancer — if caught soon enough — is eminently treatable.

A doctor at the Los Angeles Free Clinic, where I went to get a PSA test, asked me if I had ever been in the service. Turns out, the answer was yes. He told me to go tell the Veteran’s Administration I had a possible diagnosis of cancer, and they’d take me in right away.

He was right. Over the past three years, the VA has looked out for me. Turns out that year in Southeast Asia did have some worthwhile value after all. And it’s a good thing, because I got a job where I would not have been able to use the health insurance the company offered, since I now had a “preexisting condition.”

As it turns out, after all their tests,I have prostatitis, not cancer (not yet anyway), and they want to treat it so as to lower the possibility of cancer. That involves medicine that decreases the size of my enlarged prostate.

We tried Finasteride, and it just made me sick. No go. The alternatives are Flomax or Avodart. At present, neither one is on the list of drugs the VA can give (though they can get a special dispensation), though they are easily available if you’re on Medicare, through Medicare Part D. Only the drugs cost over $100 month if you get them from Canada, and a good double that here.

Even with Medicare insurance, they’re not cheap in any way. Way too expensive for me, and then there was the problem that about three years into the treatment — assuming it worked — I’d hit the “doughnut hole” where I’d have to pay the full price I couldn’t afford, just as my body really needed the drugs. Going off them would result in writing “Fade to Black” in about two or three years. Two or three painful years.

And now, thanks to this awful bill that doesn’t do all the wonderful things we Lefties were willing to sacrifice it for, that’s not my future. Thanks to this bill, the VA will be able to get me those drugs at VA prices, paid by Medicare, without ever worrying about the “doughnut hole.” I’ll be able to afford to stay alive. Danny, the youngest kitty who came in my life last fall with a life expectancy of around 15 years, who I promised to take care of for all of his life, gets the promise kept.

Not only that, but my wife, who as a self-employed person with the problems most women over 50 face, who couldn’t get health insurance even if she could afford it because all those conditions women over 50 face due to the accident of their birth as women — which are called “preexisting conditions” by the insurance companies — will now be able to buy in to Medicare four years early.

She won’t have to ever spend another six weeks fighting bronchitis and “toughing it out” without antibiotics — as she has been doing these past six weeks — because she’ll now be able to see a doctor and get the necessary prescription. At a price she can afford for both.

Yes indeed, this “awful bill” that sold out the left in America sure is horrible.

I just keep remembering that when Social Security passed in 1935, it only covered jobs traditionally filled by white males (and not all of them), but when I got my Social Security Card 52 years ago, everybody was covered. And Medicare in 1964 was a shadow of what it is today (which is hopefully a shadow of what it will be as we amend this new system to end up with “Medicare for all”).

In the meantime, I like the fact that I’ve now got a good shot at hitting the longevity numbers eight generations of Cleaver males before me (excluding the one immediately before me, who walked around with a piece of uranium the size of his thumb in his pants pocket for six weeks in 1955) have had. With a vegan diet, a 161 cholesterol, and a blood pressure of 132 over 63, I’ll be kicking the wingnuts for a long time to come.

Thank you, you stupid spineless worthless Democrats, for standing up when it counted.

5 Responses to Thomas Cleaver to Spineless Democrats : Thanks for Saving my Life