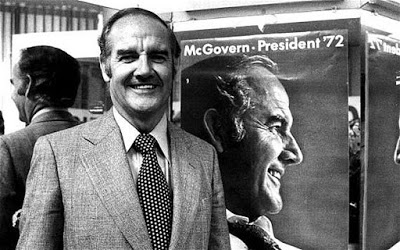 McGovern, who flew 35 missions as pilot of a B-24, took what he had learned in those deadly skies and put it into his politics, caring for his country the way he cared for his crew…

In 1972, my then-boss met with then-presidential candidate Senator George McGovern, and thus I also got to meet him. The most decent guy I ever met in politics.

To me George McGovern and Richard Nixon perfectly illustrate the basic difference between the two parties, and the point is nowhere better made than to look at their respective careers in the Second World War:

Richard Nixon, who arrived on Guadalcanal a year after all the fighting was done, spent his time in the rear with the gear as a supply officer who played poker well enough to come home at the end of the war with the money for a down payment on his first home. Out for himself, from the git-go.

George McGovern, who flew 35 missions as pilot of a B-24 operating out of Italy, facing the chance of being blown out of the sky 35 times (flak was far more deadly to B-24s than fighters), who cared for his crew, men who loved him all the rest of their lives, who took what he had learned in those deadly skies and put it into his politics, caring for his country the way he cared for his crew, using that courage that had to sustain him then, to take the most unpopular position a politician could take: to oppose the war created by the president of his party, and make the issue stick.

Conor Friedersdorf, no Democrat or liberal, had this to say on McGovern’s passing:

Over the course of his career, McGovern made a lot of arguments that I personally find unpersuasive. But he sure did get the most important issue of his time right. Think of all the Americans who’d be alive today if the country had listened to McGovern rather than his opponents about the Vietnam War. Think of all the veterans who’d have been better off. Think of how many Vietnamese civilians would’ve been spared death by napalm.

From Hunter S. Thompson’s legendary Fear and Loathing on the Campaign Trail ‘72:

The tragedy of all this is that George McGovern, for all his mistakes… understands what a fantastic monument to all the best instincts of the human race this country might have been, if we could have kept it out of the hands of greedy little hustlers like Richard Nixon.

[Vietnam veteran Thomas McKelvey Cleaver is an accidental native Texan, a journalist, and a produced screenwriter. He has written successful horror movies and articles about Second World War aviation, was a major fundraiser for Obama in 2008, and has been an activist on anti-war,  political reform, and environmental issues for almost 50 years. Read more articles by Thomas Cleaver on The Rag Blog.]