Thomas McKelvey Cleaver : It’s ‘How You Play the Game’ 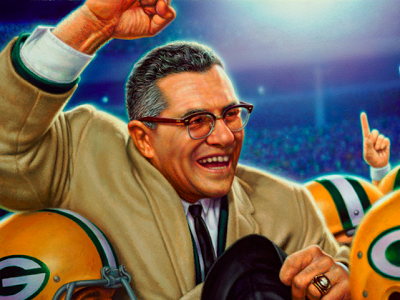 Vince Lombardi was famous for saying, “Winning isn’t everything, it’s the only thing.” Image from Great American Things.
Did winning become everything
for Penn State’s Joe Paterno?

Forty-eight years ago, Vince Lombardi was quoted as saying, “Winning isn’t everything, it’s the only thing” (words that were first uttered by UCLA coach Red Sanders). That — to me and a lot of other people at the time — was in complete opposition to what we had learned as members of sports teams: that how you win, how you play the game, is equally as important as what you win.

In the years since, Lombardi’s bastardization of morality has become the guiding philosophy of the entire society, not just in sports, and the result is the moral catastrophe of Wall Street we all now live with.

One of the things Joe Paterno was famous for saying was that he didn’t think winning was everything, if his teams didn’t learn to be better people as part of the process. And then, when it came down to the most important decision of his life, he chose to do the minimum, to not follow up, to not care what the outcome was, to not rock the boat. And everyone above him at Penn State put money and power and prestige above doing the right thing, also.

And then when it came out, Paterno’s arrogant response was to offer to resign when his contract expired. The man had no clue. His indifference, his complicity in Jerry Sandusky’s crimes, is going to overshadow everything else in his life. The fact that Paterno has now hired a criminal defense attorney demonstrates he has some idea of what he faces.

I don’t know why I am really surprised, sports hasn’t been about building better people for a long time. Robert Redford got it right in his 1969 movie, Downhill Racer, where his character was the precedent for the kind of worthless “sports heroes” we have today, guys with no understanding of “it’s how you play the game that counts.” (The movie is available on DVD and I highly recommend it; it has only gotten more timely in the passing years)

Professor Henry Giroux, whose books include the recently-released Youth in a Suspect Society: Democracy or Disposability? and The University in Chains: Confronting the Military-Industrial-Academic Complex, has what I think is the best commentary, as published in Truthout:

There is a lot of talk about the culture of silence as if it is simply an offshoot of the need to protect the wealth and power of those in control of Penn State’s football empire, but the fact of the matter is the real issue is that higher education has been corrupted by big money, big sports, corporate power, and the search for profits for some time, except that in the age of unabashed free market fundamentalism, it has gotten worse.

The issue here is not simply about a morally depraved culture of silence, it is about a university surrendering its mission as a democratic public sphere where students learn to think critically, hold power accountable, and connect knowledge and social relations to the social costs they enact.

A university needs real leadership for this type of task, not managerial clones who confuse education with training and engaged research with Pentagon and corporate handouts. Penn State is now a managerial model of corporate influence and power and the arrogance and bad faith this model breeds is evident in the ways in which everyone acted in the face of this crisis, from Paterno to its ethically challenged president, Graham Spanier.

What the public should be asking about this crisis is not what has happened to Penn State but how have so many universities arrived at a similar place in time and history when they are just like any other mega factory and slick shopping mall, divorced from any viable notion of learning and, as we see with Penn State University, any viable sense of ethical and moral responsibility.