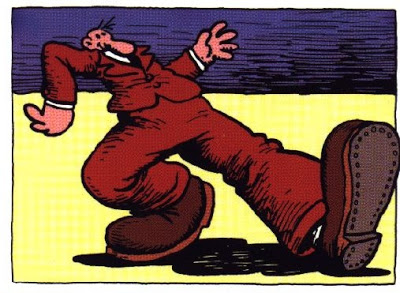 Keep on Truckin’. Classic cartoon by R. Crumb.
The David and Alice debate:
We can’t afford to give up the fight

[Austin activist David P. Hamilton announced his “retirement” from political activism in The Rag Blog on March 30, 2010. On April 6, our Alice Embree responded, proclaiming her intention to “carry it on.”]

I’ll say right up front that — at first read — I was surprised by David Hamilton’s announcement of his “retirement” from the movement and radical politics.

I don’t know David face-to-face, as do many readers, but over the past few years that I’ve marginally become re-involved with Austin politics through my involvement with Under The Hood Café [the Killeen-based GI coffee house], I have come to know David through our e-mail conversations. As with many ex-Weathermen I continue to disagree with him on certain important-to-us topics, but he’s a guy who brings intelligence, knowledge, passion, and commitment to what he says and does, making him someone whose thoughts I respect.

It only took me another few minutes to easily identify with what he was saying about his disillusionment with Obama. I’m the guy who spent the better part of five months in 2008 personally raising $350,000 for the Obama campaign from Democrats all over the country, and as a result I know first-hand the enthusiasm that was out there, the longing from “the rest of us” for real change in this country.

Thus, my disappointment as I have watched Obama the Candidate of Promise become Obama the President who takes every position I oppose on just about everything, is pretty damn strong — perhaps even stronger than David’s disillusionment. Most of my friends greet me nowadays by asking “So, what has Obama done to piss you off today?” It’s said as a joke, but sadly it really isn’t that funny. Thus, it’s easy for me to understand where David’s coming from.

I also know well the decision to withdraw from radical politics out of disappointment and disillusionment with the lack of “progress.” I did that myself for a number of years.

I’ve also been privileged to be a Fan of Embree for 44 years now, ever since Alice showed up looking for me at a college in Colorado where I was one of the few radicals and the only anti-war Vietnam vet. Over those years, she’s been one of my models for how one survives as a leftist in America without going nuts, and when I decided I would see what I could do to help the GIs at Fort Hood start a new coffeehouse, she was the first person in Austin I went looking for, knowing that if I could get her involved, things would be done right.

Reading her response to David, I identified with her decision to focus on the small victories that come along, and to keep working for the big one. My reason for coming back from withdrawal was that I found out that — for me personally — doing as Alice does was essential for my physical, mental, moral, and spiritual health.

It’s easy right now to take David’s way. I fight the urge to do so every morning when I read a blog and get outraged over the latest outrage. But we really can’t afford to do this, not now. Not with what’s out there.

They’re targeting the people David says are worthless (because they mostly are) — the Democratic members of Congress. They’re doing it over the passage of that worthless piece of legislation, the health care reform bill. Go read about the people being arrested for making credible threats against Speaker Pelosi or Senator Murray. These raving lunatics are only the tip of the iceberg, as was the Hutaree “militia.”

Back 20 years ago, I had the privilege from my work in Hollywood to get to know the legendary motion picture director, Billy Wilder. He told me the story of his years in Berlin in the 1920s and early 1930s. He came to the conclusion in 1928 that Hitler and the Nazis were a “credible threat.” Nearly all of his friends disagreed, and over the years he acquired the reputation of being a crank on the subject of those ridiculous Nazis.

On the night Hitler won the election in January 1933, Wilder packed all he owned into a steamer trunk, went to the Berlin train station, and bought a one way ticket on the Paris Express. As he put it, “I didn’t return for 12 years, and when I did, none of the people who had told me I was crazy to worry about Hitler were still alive. They’d been put to death.”

Back in 1933, the German political radicals refused to support the moderates and liberals against the Nazis, with the Communists calling the Social Democrats “Social Fascists” — a term not too far removed from David’s description of Obama and the Democrats. History has shown that attitude and the political strategy it engendered didn’t work out.

Right now, there is every indication that the Republican Party is about to win back nearly all that it lost in the 2006 and 2008 elections, despite the fact that their political platform is “more of the same” — more of the same of everything that nearly destroyed us over eight years.

Anyone with any brains can see clearly that the Obama Presidency and the Democratic Party have largely brought this on themselves with their fecklessness and their unwillingness to actually be “the party of change” that they campaigned on. This has in turn brought about the disillusionment of all those folks I called over the summer of 2008, the people who had never given money to a political campaign before and who really were giving “till it hurt,” and this disillusionment has created the gap that polls are seeing between Democrats and Republicans when it comes to enthusiasm for participating in this fall’s elections.

Consider, however, what a GOP majority in the House and/or Senate will create. Will it create more chances for the kinds of changes we hope to see? Newt Gingrich was cheered when he spoke to the Southern Republican Leadership Conference and called for a Republican congress to de-fund every progressive change that has been put in place by the Obama Administration.

He specifically mentioned the EPA and their plan to deal with climate change under the powers the Supreme Court says they have under the Clean Air Act. And he also mentioned de-funding the Department of Labor, which for the first time in 30 years has people running it who really are working for the interests of working people. Whatever one wants to say about health care reform, what is going on at EPA and DOL are the kinds of things we on the left want.

If we surrender to David’s attitude, if we decide to take our marbles and go home because everything isn’t perfect and the People’s Revolution hasn’t happened, then we are leaving the field uncontested to the people who would be happy as hell to put every one of us in a concentration camp, the people who have been The Enemy for all the history of this country.

If we want to keep the opportunity of doing the kind of work Alice Embree is the embodiment of, we cannot make the choice David Hamilton has. Not in 2010. Not in the face of what is happening.

Your mileage may vary.

[Thomas McKelvey Cleaver, an aviation writer, screenwriter, and social activist, worked hard for the election of President Barack Obama. A Vietnam veteran, he is active in the GI anti-war movement; he was involved in the Oleo Strut, the Vietnam-era coffee house in Killeen, Texas, near Ft. Hood, and helped start its modern day counterpart, Under the Hood. He is a frequent contributor to The Rag Blog.]