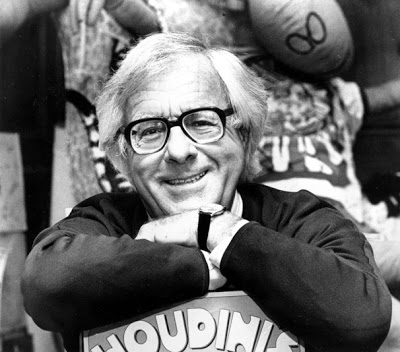 Ray Bradbury in 1982. Photo by Lennox McLendon / AP / Washington Post.
Ray Bradbury remembered:
The librarian told my dad
he was asking for trouble

“Ray Bradbury, a boundlessly imaginative novelist who wrote some of the most popular science-fiction books of all time, including Fahrenheit 451 and The Martian Chronicles, and who transformed the genre of flying saucers and little green men into literature exploring childhood terrors, colonialism and the erosion of individual thought, died June 5 in Los Angeles. He was 91.” — Becky Krystal, The Washington Post

“Bradbury was the perfect author for dreamy kids, kids who can spend hours finding the figures in clouds, or who get lost in reveries about desert islands or space colonies on parched planets… It was as though Bradbury was our secret ally, the first grown-up we ever ran into who broke with the party line and sided with us.” — Malcolm Jones, The Daily Beast

I remember well my dad picking out The Martian Chronicles from the paperback section of the Eugene Field Library in Denver’s Washington Park in response to my badgering him.

I had recently discovered that the world of science fiction lay just around the corner (literally!) from the boring “juvenile books,” and had already discovered Isaac Asimov. But only adults could check out the paperback books, so I convinced Dad to get it.

The librarian told him he was “asking for trouble” if he let me read such books at such an age (how right she was!). What fantastic stuff! And then a year later Dad brought home the new paperback — Fahrenheit 451. Reading that at age 10, in the midst of what was going on in America at that time, had a lasting effect. I don’t think there’s anything Ray Bradbury ever wrote that I didn’t read and like.

In 1967, while working on draft resistance here in Los Angeles, I was going through the file cards we had of people who had given us money, with the objective of calling them up and asking for more. I found one for an “R. Bradbury” who lived not that far away, over toward the 20th Century Fox lot in Rancho Park.

I called him up and he said sure, he’d be happy to help some more. But he didn’t drive and could I come over and pick up the check? So I did. And when he answered the door I knew it was Him, and when he invited me in it was all I could do not to act like an idiot.

But after talking to him — and answering his questions about how and why someone who had already served would be working on draft resistance, telling him what I had learned in my service in Vietnam — I finally couldn’t stop myself, and I told him how I knew him, and that reading his books had a lot to do with why I was doing that work. He liked hearing that.

I also remember getting a nice note from him through the Science Fiction Writers of America upon my gaining membership in 1989 for having written The Terror Within, saying he had quite enjoyed the movie and that he remembered from where he knew my name.

Bradbury talked often about being a “graduate of libraries.” I am sure I am too (even though I did go to college).

He was one of the best of my teachers there in those libraries. A Professor of Humanity.

[Thomas McKelvey Cleaver is an accidental native Texan, a journalist, and a produced screenwriter. He has written successful horror movies and articles about Second World War aviation, was a major fundraiser for Obama in 2008, and has been an activist on anti-war,  political reform, and environmental issues for almost 50 years. Read more articles by Thomas Cleaver on The Rag Blog.]