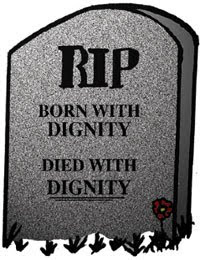 Death with dignity:
Why we need those ‘death panels’

…my father had gone into a coma that afternoon, and it was time for the family to fly to Denver and gather ’round for his final time on earth.

The Right claims that “Obamacare” will provide “death panels” that will decide who lives and who gets euthanized.

True to form, the most spineless political party on the planet — the Democratic Party of the United States — has decided they can’t stand up to outrage manufactured by the pharmaceutical industry, the health insurance industy, and their far right Republican allies who seek any issue they can find to oppose the Democrats. They know that health care reform, once passed, will mean that once the very people now screaming at Congresspeople experience the ehhanced quality of care, that they will have no political future. Thus, they have to strangle the baby in its crib.

Here’s the kind of scenario they’re fighting to defend:

In late March, 1988, I got a call from my mother that I had been expecting and dreading for a week. After getting sick while out to dinner a week earlier and being hospitalized for it, my father had gone into a coma that afternoon, and it was time for the family to fly to Denver and gather ’round for his final time on earth.

My father was dying of colon cancer, which he was pretty fairly certain was the result of his having walked around for six weeks in his work pants at the government lab he worked in 50 years earlier, with a piece of unranium as big as my fist in the front pocket.

Mom and Dad had been out to visit me in Los Angeles the summer before, and he’d told me he figured from what the doctors were saying that he had maybe a year left. He’d also talked to me about what he would want done if he was unable to tell people how he wanted to be cared for when the end came. I asked him to write that down somewhere, tell mom where it was, go visit a lawyer, do something to be sure more people than I knew this. He said he would.

As they say, the road to hell is paved with good intentions. When I got to Denver the next day, the first thing I did was ask my mother if she knew where Dad’s letter was. He’d never written it.

Things were hard enough. “Dysfunctional” described my family going back at least two generations, before anyone knew what the word meant. For me, it was a case of “the wrong one’s dying.” My mother and I had never had a functional relationship, and I was pretty certain everything bad that could happen was about to cut loose. I wasn’t wrong.

My sister, the recently-converted Mormon, came hoping to convince dear old Father Dearest — who detested her religious choice — that it was time for him to join the community of Heavenly Father and let her copy down all the family names in a bible going back to the 18th Century, to offer them “life everlasting.” She and her husband had no interest in dealing with me, my brother or my mother. My brother was his mother’s son, and unlikely to ever oppose any decision she would make.

Things simmered thus for four days, with Sister Dearest demanding a schedule with a two-hour block of time in the afternoon when she would know she and her husband could visit the hospital without having to deal with the rest of the family.

My brother and I got the late evening “watch” that day; I was alone with my father while my brother went to get coffee. Wouldn’t you know it. that was when he chose to “come to” for a few minutes. He couldn’t talk, but I was able to determine he did know what was going on, and where he was, and who I was. I needed to know if he had changed his mind. I told him I would ask some questions with yes and no answers, that one squeeze of his hand would be “no” and two would be “yes”; I wanted to be as certain of any yes answers as I could be.

And then, just as my brother walked back into the room with the two cups of coffee, Dad went back into his coma.

I told my brother what had happened. Amazingly, he believed me, and said he had hoped this would be the case. He also said he knew Mormons never allowed such a decision by the dying to stop the attempt to “save” them, which would mean my sister would have a religious reason to do what she would have done anyway, which was to oppose anything I said.

Convincing Mom was going to be the only way. When we got back home that night, she was still up. I was the one chosen to make the presentation. She didn’t like it at first and asked my brother what he thought. His good intentions went out the door.

It took several hours and everything I had in me not to scream back at her when she screamed at me how I had always hated my family, but in the end her love for her husband of 45 years and her own desire not to end up in a coma unable to communicate led her to agree.

World War III came when my sister was informed of the decision. Unfortunately, it came after we had told the hospital to remove everything but the saline drip, with a nurse whose religious convictions wouldn’t allow for such actions telling my sister we had decided to “kill” her father.

Fortunately, Mom stayed strong during the final two days of my father’s time on earth, and he was able to die in peace, or at least as much peace as someone in my family will ever get.

To this day, 20 years later, my sister would tell you — if you asked — that I killed my father because an atheist like me had never loved my family.

Had Dad written that letter, even better had he given it to the family lawyer, none of the drama described above would have happened. I wish I had kept on him about taking care of it, but who wants to be the one to be constantly telling someone you love that they’re going to die and have to do something about it — particularly when you don’t want to think of them going any more than they do?

And that is why it is so necessary that people be provided the option of deciding for themselves, while they are in control of their lives, how they will be allowed to leave. There is too much drama in the best family for anyone other than that person to make such a decision without suffering some sort of adverse consequences.