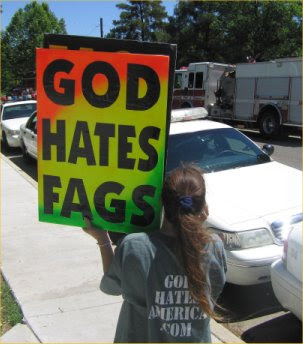 I post most of The Rag Blog’s material to social networking site Reddit. Yesterday I sent a link to an article brother Richard Jehn placed on the blog — Gay Rights Activist Aravosis: ‘Utah Is a Hate State’ — and included the following as a “comment” (actually the subhead and lead to the story):

Utah’s growing tourism industry and the star-studded Sundance Film Festival are being targeted for a boycott by bloggers, gay rights activists and others seeking to punish the Mormon church for its aggressive promotion of California’s ban on gay marriage. ….

I thought our esteemed and erudite readers might enjoy the following high-level exchange (you know, like: “Turkey Butt!” “Dung Face!” That kind of thing, but with bigger words) between your correspondent (“tdreyer”) and a faceless entity name of “obbop.”

obbop: And I believe a growing percentage of the population is growing to HATE the gay, their supporters and their stick-it-in-your-face agenda tactics.

Piss on the gays.

I still follow a live-and-let-live approach to life but observing the childish uncivil antics of the gay crowd I will strike back via the ballot box.

I assure you PC correct idiots, too many of you are actually hurting your cause.

The backlash will occur.

tdreyer: Gosh. Deja vu. Hey, Obbop, not long ago we could have replaced “blacks” for “gays” in your lovely little spiel and the next comment might well have been, “Get a rope!”

tdreyer: Dude. No, leave the rope alone. If you’re feeling suicidal, you should seek professional help.

obbop: Oh, never fear. If the necessity to depart this plane of existence arises a shotgun to the head with no one around to call for medical assistance will ensure the task is accomplished to its completion.

None of that “cry for help” crap from a member of the warrior class.

If you fall into that grouping, I pity thee.

tdreyer: A handy tag for a grandiose bloated self-image, methinks.

Keep your pity, but thanks for the thought.

Feel sure he’ll wish to get in a last word, and I may append.