Visionaries in the field for decades, Pliny and Gail have made significant contributions to the sustainability movement. 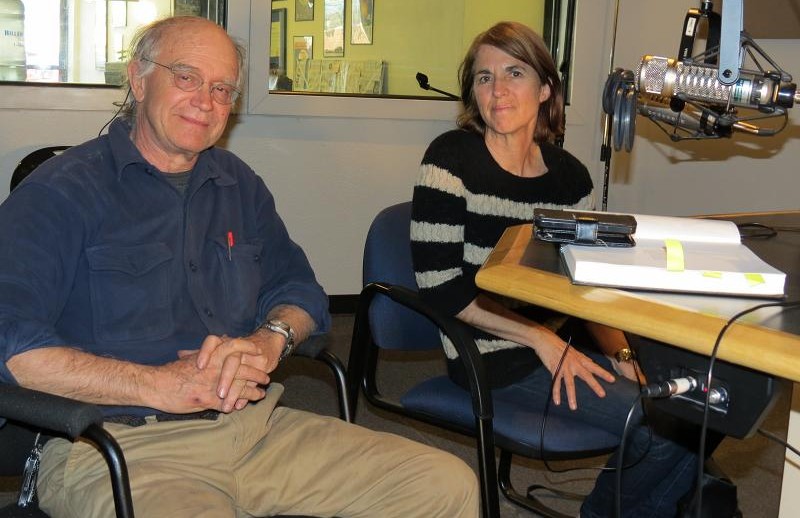 Pliny Fisk and Gail Vittori in the studios of KOOP-FM, Austin, Texas, on Friday, February 14, 2014. Photo by Roger Baker / The Rag Blog.

Pliny Fisk and Gail Vittori, co-directors of the Center for Maximum Potential Building Systems, were our guests on Rag Radio, Friday, February 7, 2014.

Rag Radio is a weekly hour-long syndicated radio program produced and hosted by long-time alternative journalist and Rag Blog editor Thorne Dreyer.  The show is recorded at the studios of KOOP 91.7-FM, a cooperatively-run all-volunteer community radio station in Austin, Texas. It is broadcast live on KOOP every Friday from 2-3 p.m. (CST) and streamed live on the web.

Listen to or download the podcast of our February 14, 2014, Rag Radio show with Pliny Fisk and Gail Vittori, here:

Pliny Fisk III is the co-founder and co-director of the Center for Maximum Potential Building Systems. With a background in architecture, landscape architecture, and the systems sciences, Pliny has made pivotal contributions to the sustainability movement for more than four decades. His prototypes challenge conventional wisdom about building design, engineering, materials, economic development, and landscape and regional planning.

For more than 30 years Gail Vittori, co-director of the Center, has been a catalyst for local, state, and national initiatives advancing green building protocols, policies, and prototypes. In 2001, she convened the Green Guide for Health Care, catalyzing a revolution in healthcare design, construction, and operations. She is the 2013 Chair of the Green Building Certification Institute Board of Directors and serves on the Health Production Declaration Collaborative Board.

The Center for Maximum Potential Building Systems, established in 1975, is a non-profit education, research, and demonstration organization specializing in life cycle planning and design. They undertake projects based on their potential contribution to site, regional, and global sustainability, and human health, and actively pursue collaborations with associate organizations, businesses, and professional firms.