We broadcast live from the Rag Reunion, pay tribute to Tom Hayden, visit with the armadillo man, learn about the Standing Rock protests, interview Trump’s most hated biographer, enjoy some live music, and talk us some populism. 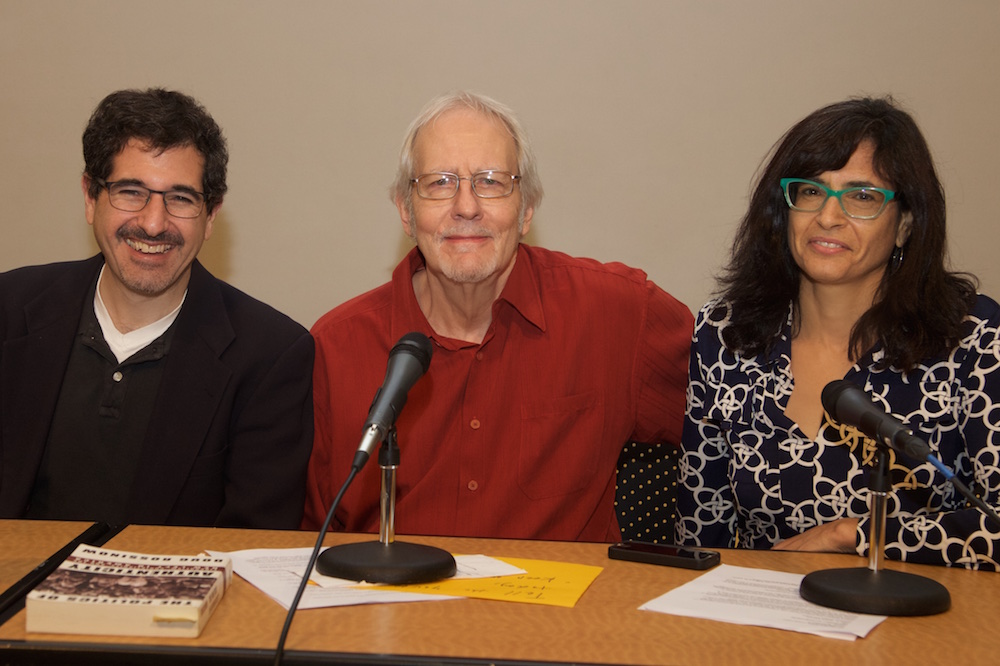 Rabbi Arthur Waskow and Carl Davidson discuss the life and legacy of the late Tom Hayden, founding spirit of SDS, principal author of the Port Huron Statement, and arguably the most influential figure in the Sixties New Left, who died on Oct. 23. Arthur and Carl, were both friends of Tom and worked with him since the Vietnam era.

Read the full show description and download the podcast of our Oct. 28, 2016 Rag Radio interview with Rabbi Arthur Waskow and Carl Davidson, here — or listen to it here:

Thorne Dreyer interviews historian and author Doug Rossinow, joined by UT-Austin American Studies Assoc. Prof. Julia L. Mickenberg, in a remote broadcast from ACC Eastview Campus that was the keynote event of the highly successful 50th Anniversary Rag Reunion and Public Celebration, which took place Oct. 13-16, 2016, at several Austin venues. Rossinow is the author of The Politics of Authenticity: Liberalism, Christianity, and the New Left in America, (1998), an influential analysis of the New Left using the movement at the University of Texas at Austin as a case study.

Read the full show description and download the podcast of our Oct. 15, 2016 Rag Radio interview with Doug Rossinow and Julia Mickenberg here — or listen to it here:

Here’s the podcast of Thorne Dreyer’s Rag Radio interview with famed surrealist graphic artist Jim Franklin, the “Michelangelo of armadillo art,” whose work graced the pages of The Rag, and longtime peace and justice activist Alice Embree, a founder of the paper. They talk about the 50th Anniversary Celebration of The Rag, with tales of Austin’s iconic underground paper, Austin in the ’60s, and Jim Franklin’s misadventures with his pet armadillo!

Read the full show description and download the podcast of our Oct. 7, 2016 Rag Radio interview with Jim Franklin and Alice Embree, here — or listen to it here:

Geronimo Son, a Dakota, spent a week and a half at the Sacred Stone Camp near the Standing Rock Reservation in North Dakota with thousands of other Natives and non-Natives protecting water and sacred lands from the Dakota Access Pipeline. Judge Steve Russell, a member of the Cherokee Nation of Oklahoma, is a columnist for Indian Country Today Media Network where he writes about Native American issues and other topics and writes for The Rag Blog. They discuss the unprecedented action where thousands of indigenous activists and their supporters are protesting the proposed $3.8 billion Dakota Access pipeline.

Read the full show description and download the podcast of our Sept. 23, 2016 Rag Radio classic interview with Geronimo Son and Steve Russell in performance here — or listen to it here:

Harry Hurt III is, according to Tim Mak at the The Daily Beast, Donald Trump’s “most hated biographer.” Harry is the author of Lost Tycoon: The Many Lives of Donald J. Trump, originally published by W.W. Norton in 1993. Hurt discusses the Trump scandals, including his ex-wife’s accusations that Donald raped her, how Ivana Trump and The Donald tried to stop publication of this book, and the obstacles Harry went through getting the book reissued.

Read the full show description and download the podcast of our Sept. 17, 2016 Rag Radio interview with Harry Hurt III — or listen to it here:

Author, musician, and artist Jesse Sublett — a longtime friend of Rag Radio — discusses his work, reads some recent poetry, and performs a couple of his latest songs. Jesse also discusses his book-in-progress about Esther’s Follies and the 40 years of Austin’s legendary “neovaudeville” magic-and-sketch-comedy theater. And he previews the book he’s working on with/about Eddie Wilson and Armadillo World Headquarters.

Read the full show description and download the podcast of our Sept. 9, 2016 Rag Radio interview with and performance by Jesse Sublett — or listen to it here:

Rag Radio co-conspirator Jim Hightower, who may be the country’s most prominent and influential progressive populist writer and radio commentator, is a member of the newly-announced board of directors of Bernie Sanders’ “Our Revolution,” a group organized to “revitalize American democracy.” We discuss the new Sanders organization, plus the presidential campaign and why “progressives must join with people of color to expose and confront Donald Trump’s racism.”

Read the full show description and download the podcast of our Sept. 2, 2016 Rag Radio interview with Jim Hightower — or listen to it here:

Also check out the following: