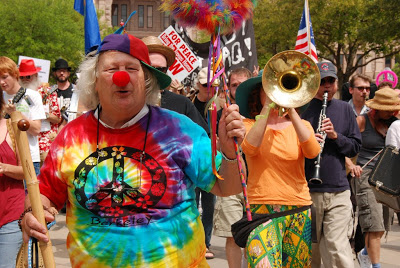 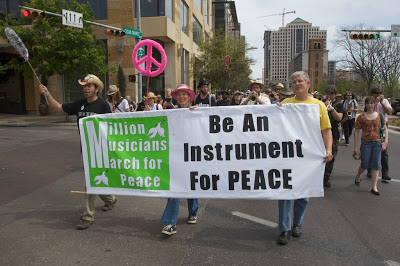 Austin musicians and activists decide to be “instruments for peace.” Photo by Alan Pogue / The Rag Blog.

“Of all the events worldwide in remembrance of the sixth anniversary of the Iraq disaster, the Million Musicians March for Peace was the only one led by musicians.” — Richard Bowden, Instruments for Peace

See gallery of photos from the Million Musicians March, by Alan Pogue and Myra Eurich, Below.

AUSTIN — They weren’t quite a million, but they sure made some beautiful music.

As hundreds of locals, tourists, musicians and industry types attending South by Southwest — the massive technology, film and music fest — packed the streets of downtown Austin Saturday afternoon, March 21, the Million Musicians March for Peace — with hippie legend Wavy Gravy leading the way — snaked by in a rhythmic procession, creating its own lively soundtrack as it passed.

[SXSW is the largest event of its kind in the world, focusing the attention of the music industry on Austin for several days in March. In the face of a down economy, this year’s event was a rousing success. It featured 2,000 musical acts from over 50 countries and drew hundreds of industry reps. It was highlighted by unannounced performances by Metallica, Kanye West, Devo and others.]

Marching behind a banner that said, “Be an Instrument for Peace,” more than 200 singing, chanting and dancing marchers followed a second-line type brass band from the Texas State Capitol through the busy streets of downtown Austin — up Congress Ave. past the crowds queued up for a premiere at the Paramount Theater, then delighting the throngs along Sixth Street’s music row, and on to City Hall for a rally and concert.

Riding a yellow pedicab, he was the Grand Marshal. Gravy, of Hog Farm and Woodstock fame, was in town for SXSW, promoting a documentary about his looney life called “Saint Misbehavin’.”

Also in the parade was Jim Fouratt, New York-based activist and cultural critic who was a founder of the theatrical Sixties new left group, the Yippies.

According to writer and graphic designer Jim Retherford, the event, which is an Austin tradition, “may not have been as large as in some years past, but it had a wonderful energy. There were affinity groups of musicians throughout the parade and it was great to see the ethnic mix and the kids with parents and grandparents laughing and dancing together along the way.”

Jim Fouratt told The Rag Blog, “I was impressed that Austin Music Award winner Carolyn Wonderland was front and center. She warmed my heart. And I was proud to march beside Wavy Gravy. It will be artists and musicians who lead us out of the chaos.”

Wonderland, a consistent activist for peace and other issues, joined noted musicians like Guy Forsyth, Leeann Atherton and Shelley King, the first woman to be named official Texas State Musician, in the concert at City Hall.

“It was great to see all my grey-haired colleagues alongside multi-generational families, all decked out in the costumes of old Austin like it was before the high-tech incursion,” Jim Fouratt added.

The theme of this year’s Million Musician March was to oppose the continuing occupation of Iraq and it also saluted the alternative media and its role in getting out the word.

Musician Richard Bowden of Instruments for Peace, the moving force behind MMM, said, “Of all the events worldwide in remembrance of the sixth anniversary of the Iraq disaster, the Million Musicians March for Peace was the only one led by musicians.” He added, “I am so glad to be in Austin where we can do something like this.”

[Thorne Dreyer, a sixties activist and underground journalist, lives in Austin, Texas. He is a director of the New Journalism Project, a contributing editor to Next Left Notes and is co-editor of The Rag Blog.] 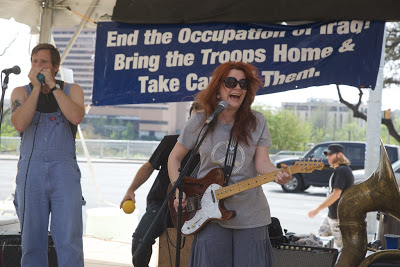 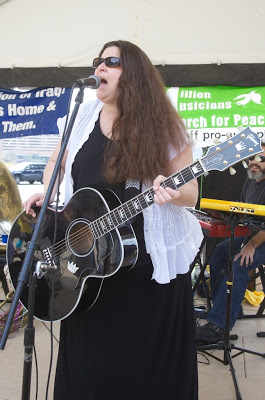 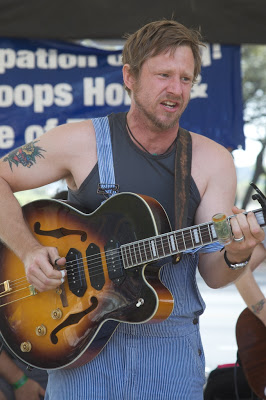 Austin’s Guy Forsyth is an instrument for peace. Photo by Alan Pogue / The Rag Blog. 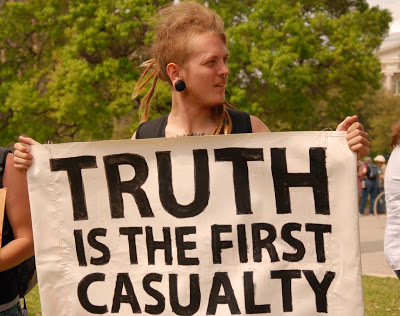 Demonstrator tells it like it is. Photo by Mara Eurich / The Rag Blog. 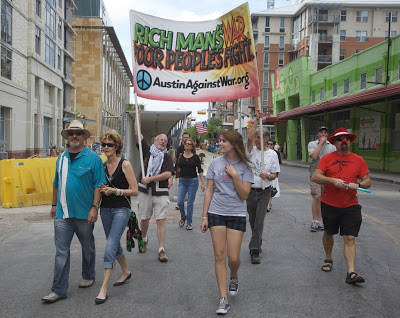 Members of Austin Against War join the MMM. Photo by Alan Pogue / The Rag Blog. 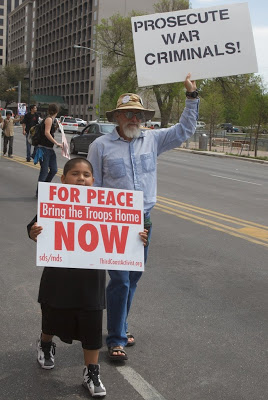 Multi-generational protest of the continuing occupation of Iraq. Photo by Alan Pogue / The Rag Blog. 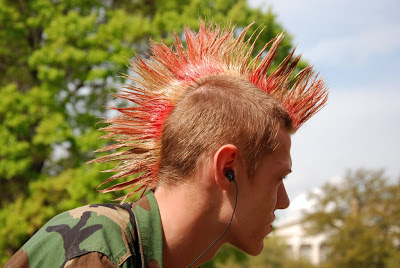 Dude’s another instrument for peace. Photo by Mara Eurich / The Rag Blog.
The Rag Blog