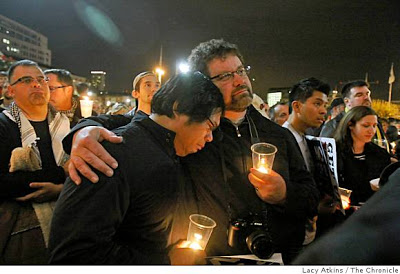 Coy Abellano is comforted by Erwin Barron as he cries outside City Hall where hundreds of people gather for a candlelight vigil in response to Proposition 8 in San Francisco, Calif., on Wednesday, Nov. 5, 2008. Photo by Lacy Atkins / SF Chronicle.
Chanting ‘Marriage, Equality, U.S.A.,’ rally participants said they will not be discouraged – and they will not back down.
By Elizabeth Fernandez / November 6, 2008

SAN FRANCISCO — Carrying signs and candles and unbreakable optimism, several thousand supporters of same-sex marriage gathered outside San Francisco City Hall Wednesday night to buoy spirits and to declare that the fight for equality would continue.

Despite the passage of Proposition 8, which alters the state constitution to prohibit same-sex couples from marrying, many of those attending the vigil said they were heartened by the vast show of support from the electorate – nearly 5 million people cast ballots opposing the measure.

“We are not sending up a white flag,” said outgoing state Senator Carole Migden (D-San Francisco). “It’s a tough state, a conservative state, it’s a big mother of a state – and we did brilliantly.”

But in the wake of a heartfelt defeat, it was impossible “not to feel like second class citizens,” said Vandi Linstrot, standing with her spouse, Jami Matanky. The couple married in Oakland on June 17 – they’ve been together 24 years and have raised twin sons.

“California is saying that it is legal to disciminate against gays and lesbians,” said Linstrot, 53, a business analyst. “Marriage is safe now? From what? I don’t know why people feel threatened by us. Many thousands of gays and lesbians have gotten married in the last few months and what happened? Straight marriage continued. There was no great upheaval.”

The rally began in somber, quiet fashion – hundreds of early arrivals stood in silence on the steps of City Hall, breaking the twilight quiet only when a passing car honked in support.

By 6:30, the gathering had swelled to approximately 2,000, according to San Francisco police, and Grove Street was closed to traffic.

Standing at the podium, Kate Kendall, executive director of the National Center for Lesbian Rights, exhorted the crowd to pay heed to history: gay rights have steadily gained ground.

“It is a shameful day and it is a day the state will live to regret,” she said.

The moment to many was bittersweet – their joy in the presidential selection of Barack Obama was diluted by California’s passage of Prop. 8.

“We won our country back but we lost a fundamental civil right,” said Board of Supervisors President Aaron Peskin. “We took two steps forward and one step back. It’s disappointing and sad. Now I put my hope and trust in the Supreme Court of California.”

Many at the vigil brought dogs and video cameras. San Francisco residents Natalie Naylor and Erika Linden brought their baby daughter, Ruby, a sweet-faced, wide-eyed symbol of the battle at hand.

“I’m hopeful that in five years, we will have full legal rights as a married couple,” said Linden. “Hopefully by the time our daughter is of legal age, all this will be a distant memory. And for her it will seem ridiculous that there was once a time when gay people could not get married.”