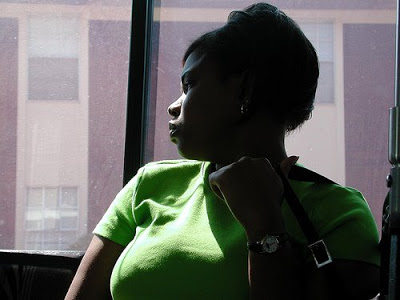 All over America, there were plenty of reasons to celebrate women last month: August marked the 88th anniversary of the 19th Amendment’s ratification, which gave women the right to vote. Women’s Equality Day, which was on August 26, commemorated that victory. There are now more women in the U.S. Congress than ever (88) and 2008 was a year when a woman came within a hair’s breadth of becoming a major ticket presidential nominee.

But this year, there’s also a real threat to the voting rights of millions of low-income women, and it is in direct violation of Federal law.

Take, for instance, the story of Dionne O’Neal. Ms. O’Neal is a resident of St. Louis, Missouri, where she works part-time while pursuing her GED. Like millions of Americans, Ms. O’Neal receives Food Stamps and government health care benefits to help meet her basic needs. If anybody has a deep concern about the future of economic policy, she does. But her right to have a say in government and what it does is being thwarted because Missouri, like many other states, has long ignored federal voter registration requirements designed to reach low-income voters.

The most disadvantaged women in our society are the least likely to express their voice in the political process. Ms. O’Neal is just one of the 32.5 million women–31 percent of all eligible women–who were not registered to vote at their current address in 2006. Low-income women like Ms. O’Neal are disproportionately represented in that number. In 2006, only 63 percent of women in households making $25,000 or less were registered to vote compared to 81 percent of women in households making $75,000 or more.

There is, though, a federal law on the books to help reverse this trend.

Congress passed the National Voter Registration Act (NVRA) in 1993 to increase the number of eligible citizens registering to vote in federal elections. Recognizing that an unrepresentative electorate is one of the greatest threats to a fair democratic system, the NVRA was drafted specifically to ensure equal access to voter registration. One of the law’s provisions, Section 7, requires public assistance agencies to offer voter registration services to clients.

But many people eligible to register under Section 7 don’t know it, because too many states aren’t properly implementing the law.

While over 2.6 million voters registered at public assistance agencies in the first few years of the law’s implementation, agency-based registration has declined significantly over the past 10 years even though more and more people are receiving public benefits such as Food Stamps. Field investigations conducted by Demos and our partners have revealed violations of the law in states across the country.

Women comprise the vast majority of public assistance recipients and thus are the primary beneficiaries of Section 7. A staggering 90 percent of adult recipients of Temporary Assistance for Needy Families (TANF) are women. Nearly 8.8 million Food Stamp recipients are women. Sixty-nine percent of those receiving Medicaid are women.

And women are likely to be the primary caregivers for children and receive benefits on behalf of their dependents. Not surprisingly, according to the US Census, over three quarters of those who manage to register to vote at public assistance agencies are female.

Now more than ever, implementation and compliance with the too-long ignored National Voter Registration Act is a women’s issue. The most disadvantaged members of society are least likely to participate in politics but arguably have the most to gain-low-income women lag behind in education, have less access to healthcare and affordable housing, have fewer assets, and experience more job insecurity.

The current economic downturn only makes matters worse for low income women, as single mothers have the highest unemployment rate among all men and women. Various policies, including enhanced educational opportunities and increased paid family leave, have been proposed to improve the lives of low-income women and their families. Unfortunately, politicians will not respond properly to the needs of these women if they do not exercise their political power.

There are increasing signs that states will no longer be able to ignore their responsibilities under the law. In a lawsuit brought by Ms. O’Neal, a federal judge in Missouri recently ruled that the state’s Department of Social Services is in violation of the NVRA and ordered the state to comply.

Ensuring that voter registration is offered to the millions of women who participate in public assistance programs is an effective and efficient way to draw low-income women into the political process in unprecedented numbers, providing them with the voice they desperately need.

About the Authors: Research assistant Brittany Stalsburg and Senior Policy Analyst Scott Novakowski work on the NVRA implementation project in the Democracy Program at Demos, a national public policy center. Brittany is a political science Phd student concentrating on women in politics at Rutgers University.

This entry was posted in RagBlog and tagged Electoral politics, Voter Registration, Women. Bookmark the permalink.