Tim Black, Barack Obama and all that Chicago Jazz 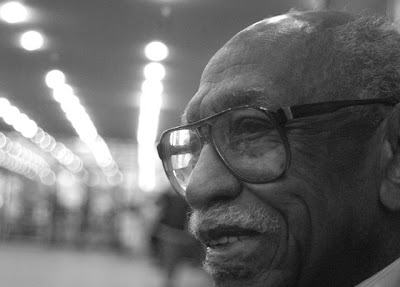 Chicago historian and activist Timuel D.(Tim)Black turned 90 with lots of jazz and a tribute from Barack Obama.

This was also posted in Mike Klonsky’s blog, Small Talk, covering the Small Schools Workshop and its battles, a place where a number of us, including Tim Black, touched base for a while and made a difference.

‘Chicago jazz legends, including Willie Pickens, Corey Wilkes, and Jimmy Ellis, filled the Lounge with great music. But the high point of the evening was Sen. Dick Durbin’s reading of a personal birthday greeting from no less than the President-elect himself.’
By Mike Klonsky / The Rag Blog / December 8, 2008

The Checkerboard Lounge on Chicago’s south side, was jumping last night as a couple of hundred of us celebrated Tim Black’s 90th birthday. The party was organized by Tim’s wife Zenobia and the Chicago Jazz Institute.

Congressman Bobby Rush hailed Tim as the movement’s “field marshal” and the crowd, including politicians, community leaders and educators all joined in a rollicking version of Happy Birthday To Ya.

But the high point of the evening was Sen. Dick Durbin’s reading of a personal birthday greeting from no less than the President-elect himself.

Here’s the full text of Barack Obama’s messsage to Tim:

I wish I could be with you all in person today to celebrate the life of a dedicated teacher and one of the preeminent oral historians of our time, a man who keeps the soul of the South Side alive and shares his stories still, Professor Tim Black.

The Great Migration brought his family to Chicago’s South Side, and the Great Depression started him down the long path of social justice. As a student at Burke Elementary School, he’d often walk across the street to hear the orators in Washington Park argue with passion for jobs that pay a fair wage, for protections to keep workers safe, for an economy that would allow families to live in dignity and dream of a brighter future.Little did they know among their greatest lasting impacts would be the achievements of the man we honor today.

Like my grandfather, he joined the army as a fresh-faced young man in World War II. And like my great uncle, he helped liberate the Buchenwald concentration camp. It was a moment that left a mark on this man; that left no doubt as to his destiny.He returned convinced by his life experiences that the greatest impact he could make on the next generation would be to teach our youth about their communities, about the world they live in, and about how to be responsible citizens of each.

For forty years, he shaped our young men and women into those citizens. And though he may have retired from the teaching profession nearly two decades ago, he never stopped being a teacher. We are all his students in a classroom that never closes.

The man we honor today grew up in the midst of Depression and war, yet considers himself part of a fortunate generation. And he’s made it his life’s mission to give each successive generation every possible chance in this world.

“I never lose hope,” he once said. “I believe that I have responsibilities to help younger people to obtain hopes and dreams. Their present condition may be very discouraging; my aim is to help them regain a sense of hope for the future. My main interest is in building a better America, building a better world.”

Tim, for your birthday, I promise you this: that will always be my mission too. Thank you for a life well-lived. I wish you all the best for the stories you’ve yet to tell.

[Carl Davidson is webmaster at Progressives for Obama.]