Tim Wise : Imagine if the Tea Party Were Black 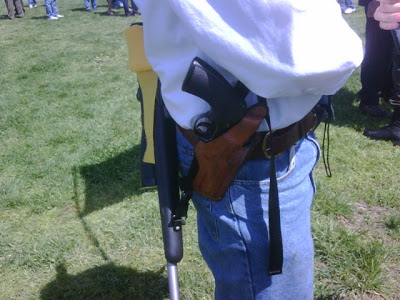 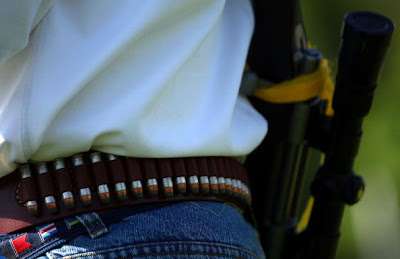 Imagine if these guys were black. Demonstrators carried weapons at a “Restore the Constitution” rally on the Potomac in Arlington, VA, April 19. Photos (top) by Bob Barnard / Fox 5 / New York, and (below) by Win McNamee / Getty Images.
Changing Places:
What if they had been black?

Imagine that even one-third of the anger and vitriol currently being hurled at President Obama, by folks who are almost exclusively white, were being aimed, instead, at a white president, by people of color.

Let’s play a game, shall we? The name of the game is called “Imagine.” The way it’s played is simple: we’ll envision recent happenings in the news, but then change them up a bit. Instead of envisioning white people as the main actors in the scenes we’ll conjure — the ones who are driving the action — we’ll envision black folks or other people of color instead.

The object of the game is to imagine the public reaction to the events or incidents, if the main actors were of color, rather than white. Whoever gains the most insight into the workings of race in America, at the end of the game, wins.

In other words, imagine that even one-third of the anger and vitriol currently being hurled at President Obama, by folks who are almost exclusively white, were being aimed, instead, at a white president, by people of color.

How many whites viewing the anger, the hatred, the contempt for that white president would then wax eloquent about free speech, and the glories of democracy? And how many would be calling for further crackdowns on thuggish behavior, and investigations into the radical agendas of those same people of color?

To ask any of these questions is to answer them. Protest is only seen as fundamentally American when those who have long had the luxury of seeing themselves as prototypically American engage in it. When the dangerous and dark “other” does so, however, it isn’t viewed as normal or natural, let alone patriotic.

Which is why Rush Limbaugh could say, this past week, that the Tea Parties are the first time since the Civil War that ordinary, common Americans stood up for their rights: a statement that erases the normalcy and “American-ness” of blacks in the civil rights struggle, not to mention women in the fight for suffrage and equality, working people in the fight for better working conditions, and LGBT folks as they struggle to be treated as full and equal human beings.

And this, my friends, is what white privilege is all about. The ability to threaten others, to engage in violent and incendiary rhetoric without consequence, to be viewed as patriotic and normal no matter what you do, and never to be feared and despised as people of color would be, if they tried to get away with half the shit we do, on a daily basis.

[Tim Wise is among the most prominent anti-racist writers and activists in the U.S. Wise has spoken in 48 states, on over 400 college campuses, and to community groups around the nation. Wise has provided anti-racism training to teachers nationwide, and has trained physicians and medical industry professionals on how to combat racial inequities in health care. His latest book is called Between Barack and a Hard Place.]

12 Responses to Tim Wise : Imagine if the Tea Party Were Black