Time for a Grand Inquest into Bush’s High Crimes 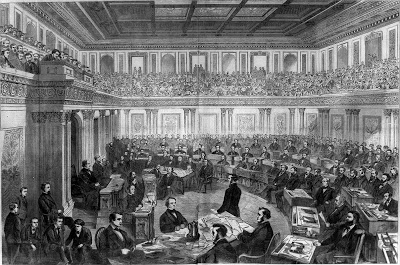 Impeachment trial of Andrew Johnson.
We have witnessed a staggering
abuse of power by the president
By Robert L. Borosage / June 24, 2008

One of House Speaker Nancy Pelosi’s first acts upon taking the gavel was to rule impeachment off the table. She wanted Democrats to focus on challenging the president on the war and on kitchen table concerns — from energy to education to health care. With Democrats now enjoying an increasing margin in generic polls and looking towards gaining seats in both the House and the Senate, the strategy certainly hasn’t hurt politically.

But the constitutional implications are far more disturbing. This was dramatized as the Congress debated the FISA reform legislation that will provide retroactive immunity to the telecommunications companies for warrantless interception of the conversations of Americans — and by implication, retroactive acceptance of the president’s authority to order such wiretaps.

We have witnessed a staggering abuse of power by this president. Even former Bush Justice Department officials now charge President Bush with trampling the Constitution. Bush has claimed the prerogative to declare an endless war without congressional approval, to designate someone an enemy without cause, to proceed to wiretap them without warrant, arrest or kidnap them at will, jail them without a hearing, hold them indefinitely, interrogate them intensively (read torture), bring them to trial outside the US court system. He claims that executive privilege exempts his aides — even the aides of his aides and his vice president’s aides — from congressional investigation. He claims the right to amend or negate congressional laws with a statement upon signing them. And much more.

Even this Supreme Court, stacked with activist right-wing judges enamored of executive national security powers, has rebuked the president on some of these claims, particularly around the treatment of allegedly enemy combatants. But many of Bush’s claims will escape judicial determination.

The Steel Seizure case — Youngstown Sheet and Tube v Sawyer, 343 US 579 (1952), remains the leading case on presidential power. In Youngstown, a six member majority of the Court joined in overturning Truman’s executive order nationalizing the steel plants to end a strike during the Korean War. Justice Black wrote the opinion for the Court, but the historically influential opinions were penned by Justices Robert H. Jackson and Felix Frankfurter, both Democratic appointees. Frankfurter laid out the argument for a sort of common law of constitutional amendment:

Deeply embedded traditional ways of conducting government cannot supplant the Constitution or legislation, but they give meaning to the words of a text or supply them. It is an inadmissibly narrow conception of American constitutional law to confine it to the words of the Constitution and to disregard the gloss which life has written upon them. In short, a systematic, unbroken, executive practice, long pursued to the knowledge of the Congress and never before questioned, engaged in by Presidents who have also sworn to uphold the Constitution, making as it were such exercise of power part [343 U.S. 579, 611] of the structure of our government, may be treated as a gloss on “executive Power” vested in the President by 1 of Art. II.

In Youngstown, Jackson concurred, arguing that the president’s powers vary as to whether he acts with congressional authority (his greatest power), in the absence of it, or in opposition to it:

When the president acts in absence of either a congressional grant or denial of authority, he can only rely upon his own independent powers, but there is a zone of twilight in which he and Congress may have concurrent authority, or in which its distribution is uncertain. Therefore, congressional inertia, indifference or quiescence may sometimes, at least as a practical matter, enable, if not invite, measures on independent presidential responsibility. In this area, any actual test of power is likely to depend on the imperatives of events and contemporary imponderables rather than on abstract theories of law.

When a president egregiously abuses his power — particularly in areas relating to the rights of American citizens — remedies are often difficult. The Supreme Court is reluctant to arbitrate a power struggle between two co-equal branches. That is why the Constitution prescribes the specific remedy of impeachment for crimes and abuses of power — High Crimes and Misdemeanors — and empowers the House and Senate to sit in judgment whether the actions are to be accepted or condemned.

What the Court said in Youngstown is that if presidents assert a prerogative — like the power to make war without a congressional declaration — systematically, with unbroken regularity, with the knowledge of the Congress and are never questioned — then that practice becomes a Constitutional power that cannot be infringed upon by the Congress or the Courts.

Thus, Congress must formally object to President Bush’s abuses or it risks by “indifference or quiescence” contributing to the powers of our imperial presidency.

When Pelosi took impeachment off the table, it was reduced to being a rhetorical protest vehicle for progressives like Dennis Kucinich or Russ Feingold. But Congress need not convict President Bush to impeach him for High Crimes and Misdemeanors. And arguably, the House need not even impeach the president to hold a Grand Inquest into the powers that he has claimed, registering a formal objection to them. The Judiciary Committee in the House should formally convene that Inquest, no matter what the decision is on impeachment. For if Pelosi’s sensible political judgment results, as it has to date, in a show of congressional “inertia, indifference or quiescence,” the Democratic majority in Congress may have gained a dozen seats at the cost of relinquishing its own powers, and putting the rights of Americans at risk.