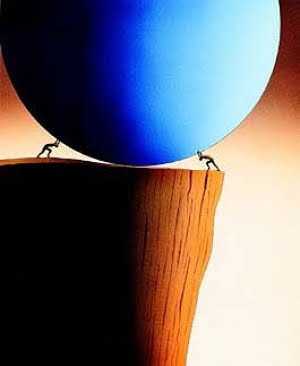 It is undeniable that CO2 levels have risen and fallen in the past. It is also undeniable that there is a point beyond which serious damage to the world’s environment will occur.

For years now, we have been arguing about global climate change (commonly called “global warming”) and whether it is caused by increasing levels of CO2 in the atmosphere.

Most of the world’s scientists believe we are nearing the tipping point, beyond which will cause global catastrophe. Conservatives disagree, saying it is natural for CO2 levels to rise and fall and we shouldn’t burden our corporations over something that is natural.

It has been hard to answer these questions in the past, because all we had to go on were ice core samples. The ice core samples will only take us back about 800,000 years. Fortunately, scientists have now developed a method for seeing CO2 levels much farther back in time — about 20 million years. And what they’ve found is kind of scary.

This new method involves taking sediment cores from the bottom of the Pacific Ocean. That gives them the ratios of boron and calcium in the shells of tiny marine organisms called foraminifera. This gives them the ph of the water as far back as twenty million years ago, and from that ph they can figure the level of CO2 in the air at any particular time.

Our current level of CO2 in the air is slightly less than 400ppm, and scientists expect we will reach the 400ppm level in about a decade (or less). The International Energy Agency, in it’s prescription for controlling CO2 levels, sees them topping out at 510ppm before stabilizing at 450ppm. The energy bill recently introduced in the U.S. Senate also uses the 450ppm figure as a target.

The new research takes us back to the Miocene period, which started a little over twenty million years ago. At that time, the CO2 levels were at 400ppm (about what they are now). This was probably caused by prolonged volcanic activity in the Columbia River Basin in North America.

But the scary part is that at that time, there were no ice caps at the north and south poles. And the sea level was 80-130 feet higher than today. The CO2 level began to decline about 14 million years ago, causing the gradual growth of the ice caps and the gradual lowering of ocean levels. Since that time, the CO2 level has fluctuated naturally between 180ppm and 280ppm.

While the pro-corporate conservatives are correct that there have been natural fluctuations, we have surpassed the high end of that fluctuation for many years now. At 400ppm and beyond we are approaching the tipping point, beyond which we will no longer be able to avoid catastrophe.

We have been debating whether 450ppm of CO2 in the air is doable. That may well be the wrong question. Considering the new research, we should be asking if 450ppm is too high a level to avert disaster. After all, the ice caps are already melting and we are not quite up to the 400ppm level of CO2.

Even if we are able to stabilize the level of CO2 at 450ppm (and that looks doubtful at present), we may just be slowing the coming disaster instead of preventing it. And that’s just not good enough.

While some of our lawmakers (and those in other countries) are talking about stabilizing CO2 levels, there doesn’t seem to be any urgency in their actions. Sadly, there doesn’t seem to be much urgency among the general population either. It’s almost as if everyone believes this is a problem, but we have a lot of time to deal with it. All we have to do is pass a law or two, but not ones that would alter our lives, and everything will be all right.

It would be nice if that were true, but this new research shows us it’s not. We may already be at or closely approaching the tipping point. Immediate and radical action is necessary. We cannot continue to build coal plants and placate ourselves with myths of “clean coal.”

We must stop polluting our air with more and more CO2. If we cannot immediately develop and transfer to really clean forms of energy, then we need to cut our energy use and change our lifestyle.

The alternative is unthinkable for our children and grandchildren.