To Be a Republican You Need to Believe … 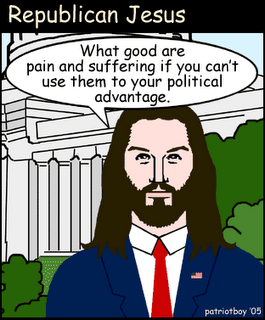 1. Jesus loves you, and shares your hatred of homosexuals and Hillary Clinton.

3. Trade with Cuba is wrong because the country is Communist, but trade with China and Vietnam is vital to a spirit of international harmony.

4. The United States should get out of the United Nations, and our highest national priority is enforcing U.N. resolutions against Iraq.

5. A woman can’t be trusted with decisions about her own body, but multinational drug corporations can make decisions affecting all mankind without regulation.

6. The best way to improve military morale is to praise the troops in speeches, while slashing veterans’ benefits and combat pay.

7. If condoms are kept out of schools, adolescents won’t have sex.

8. A good way to fight terrorism is to belittle our longtime allies, then demand their cooperation and money.

10. Global warming and tobacco’s link to cancer are junk science, but creationism should be taught in schools.

11. A president lying about an extramarital affair is an impeachable offense, but a president lying to enlist support for a war in which thousands die is solid defense policy.

12. Government should limit itself to the powers named in the Constitution, which include banning gay marriages and censoring the Internet.

13. The public has a right to know about Hillary’s cattle trades, but George Bush’s driving record is none of our business.

14. Being a drug addict is a moral failing and a crime, unless you’re a conservative radio host. Then it’s an illness and you need our prayers for your recovery.

15. Supporting “Executive Privilege” for every Republican ever born, who will be born or who might be born (in perpetuity.)

17. Support for hunters who shoot their friends and blame them for wearing orange vests similar to those worn by the quail.

Thanks to Hobbit / The Rag Blog

This entry was posted in RagBlog and tagged Electoral politics, Republican Party. Bookmark the permalink.

1 Response to To Be a Republican You Need to Believe …