To The Rag Blog Community

“The people working on The Rag Blog ‘get it.’ They understand the creative and interactive side of today’s new media. More important, they understand its role as a dynamic and participatory instrument of social change.”

To members of The Rag Blog Community:

Since the beginning of 2008 The Rag Blog has grown from 50 hits a day to 25,000 visits a month. We have become an influential force in the progressive blogosphere.

We are activist journalists committed to social change. Austin, Texas, is our base but our community is worldwide.

We are published by the New Journalism Project, a nonprofit corporation, and we depend entirely on your support.

Now, for the first time, we are reaching out to our supporters for help.

If you are in Austin, come to the RAGBLOGAPALOOSA
Featuring the Melancholy Ramblers:
Tuesday, Feb. 3, 6-9 p.m., at Scholz Garten, 1607 San Antonio Blvd.
[See poster below.]

And please donate to The Rag Blog through PayPal.

Or send a check to:

[The Rag Blog is published by the New Journalism Project, a Texas non-profit corporation in the process of securing 502(c)(3) tax-exempt status. Donations will be treated as tax-deductible retroactively to the date of incorporation. The NJP has not yet received a determination on its request for tax exempt status.]

“Austin’s Rag Rolled off an offset press in 1966 blending cultural and political coverage to become the feisty irreverent voice of a movement making change and writing about it. The Rag Blog has taken that same voice into a digital medium. As we face unprecedented challenges and opportunities, The Rag Blog gives us a new platform for ideas and community building.”

— Alice Embree, activist, writer, contributor to The Rag, The Texas Observer and Sisterhood is Powerful.

“The Rag holds a major place in Austin’s political and cultural history and its return is a reason to celebrate. It is the perfect antidote to the meek lack of resistance that saw decent Americans steamrollered for the last 30 years.”

The Rag, founded in 1966, was one of the first and most influential members of the sixties underground press. The Rag Blog has channeled that historic spirit into something altogether new, tapping the exciting potential offered by the radical new digital media — to build a community for progressive social change.

But if we are to continue to flourish, we need your help.

Thank you for being a part of The Rag Blog community,

David P. Hamilton, President
For the Board of Directors, the New Journalism Project

“The Rag Blog is in many ways what The Rag was in the middle 1960s, a light in the darkness. It is not only readable but funny. It is the single best place for insights in the entire blogosphere that I follow.” 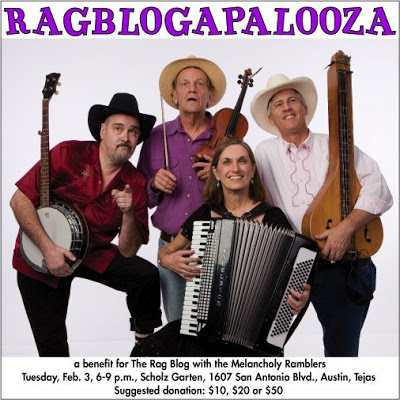 This entry was posted in RagBlog and tagged New Journalism Project, The Rag Blog. Bookmark the permalink.