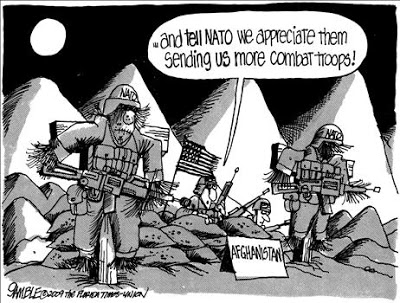 The White House and Pentagon are lobbying hard for an increased NATO troop commitment for the Afghanistan escalation, as public opinion in America, Canada and Europe — and Afghanistan — is increasingly skeptical.

Placing pressure on the U.S. and NATO governments from the bottom up, country by country, will be necessary to reverse the unsustainable dynamic towards militarism and empire.

In summary, there are three political battlegrounds of public opinion in addition to the secretive military ones being invaded by foreign troops, Special Ops and drones. The fight against the war is also a fight for democracy and majority rule against the elite global planning for a Long War. [See Hayden on Kilcullen in The Nation.]

The Obama administration’s diplomatic offensive to cement greater NATO support is being under-reported. The British and German governments are planning a late January European conference to “set a timetable for transferring security responsibilities to Afghan forces” at a date uncertain. [Reuters, Nov. 16, 2009]

Like Obama’s two-pronged approach to escalation/de-escalation, the British-German formula is likely to result in short-term escalation of at least 7,000 troops combined with an ambiguous timetable for departure, enough to placate restive public opinion.

In response, the UK’s Stop the War Coalition is sponsoring an anti-war demonstration in London on January 28.

Already the Obama lobbying effort is being hampered by the pressure of public opinion. The U.S. is seeking a commitment of 7,000 new troops from the Europeans, but it appears that 1,500 are those sent to Afghanistan to guard the presidential election this year, and who will not be withdrawn. The 5,000 scheduled by Canada and the Netherlands for withdrawal in the next two years may leave the net numbers approximately the same, but barely increased. The likely increases are from Britain [500], Poland [1000], Italy [600], Spain [400], and smaller nations. Pressure is being applied to Germany and France for another 3,500 [NYT, Dec. 17, 2009]

The logic behind British support for Afghan escalation was expressed recently by the British defense minister, Robert Ainsworth, who offered a domino theory, as follows: “If Afghanistan is not secure, then Pakistan is not secure, and if Pakistan is not secure, Britain is not secure.” [NYT, Nov. 5, 2009] Many European security experts, like Peter Neumann of the Center for Defense Studies at King’s College, claim a “broad agreement” that Europe is a “nerve center for the global jihad.” [Kilcullen, The Accidental Guerrilla, p. 247] Europe and Canada’s human rights laws, they say, create “legislative safe havens” for terrorists to plot and strike.

This argument may gain currency with the recent anxiety over the successful penetration of Western defenses by a 23-year old Nigerian, Umar Farouk Abdulmutallab, who attempted to blow up an airliner flying through Amsterdam to Detroit.

But instead of arguing that bombing Afghanistan and Pakistan, and restricting human rights laws, will make Westerners safe, homeland security officials need to examine once again the institutional incompetence that in this case permitted travel by someone whose own father, a top Nigerian banker, warned American officials that his son had taken a violent and dangerous turn.

After Secretary of Homeland Security Janet Napolitano claimed that “the system worked” in the airline bombing attempt, saying the passengers had played an “important” and “appropriate” role, she could have been forced to resign. Napolitano, a captive of her bureaucracy, was repeating the infamous role of Secretary of State Condoleeza Rice who denied the relevance of a CIA memo warning of al Qaeda attacks shortly before September 11, 2001. As a result, the Obama White House was put on the defensive by the Republican hawks responsible for loopholes in airline security made possible by either incompetence or an ideological commitment to air travel.

There is another explanation for the zealous American lobbying to keep NATO in Afghanistan which is never mentioned. Afghanistan and Pakistan are the glue that holds NATO and the “Western alliance” together and that create incentives for increased militarization in countries like Canada, Germany, and even non-NATO nations like Sweden and Japan. Why, after all, is an armed entity called the North Atlantic Treaty Organization invading and occupying South Asia? The reason was given by Obama’s national security adviser, Gen. James Jones, in 2007, when he previously commanded NATO forces:

In committing the alliance to sustained ground combat operations in Afghanistan…NATO has bet its future. If NATO were to fail, alliance cohesion would be at grave risk. A moribund or unraveled NATO would have a profoundly negative geostrategic impact.” [in Ahmed Rashid, Descent into Chaos, p. 373]

Approvingly, the influential Pakistani journalist Ahmed Rashid, writes that in Afghanistan NATO “would find meaning for its continued existence and recreate the unity that Western Europe showed during the Cold War.” [Rashid, ibid., 372]

This same alarm is voiced by Zbigniew Brzezinski in the current [Jan.-Feb. 2010] issue of Foreign Affairs:

Nothing would be worse for NATO if one part of the alliance [Western Europe] left the other part [the United States] alone in Afghanistan. Such a fissure over NATO’s first campaign initially based on Article 5, the collective defense provision, would probably spell the end of the alliance.

Democracy and domestic priorities will be the casualties in the United States, Canada and Europe if the US-NATO military expansion holds sway.

1 Response to Tom Hayden : Afghanistan and a Reluctant NATO