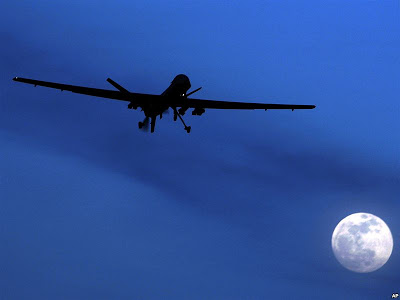 Creeping deeper into war: image of U.S. aerial drone from AP.
Droning on…
An expanding war in Pakistan

Slowly but surely, the United States is creeping deeper and deeper into a disastrous war in Pakistan. The peace movement and its political and media allies need to be ready. There is a growing community of activists and journalists already protesting and documenting the aerial drone wars over Pakistan, Afghanistan, Iraq, Yemen, Somalia, and Libya.[1]

But the debate about drones cannot be isolated from the context of their use in the Long War as a substitute for American ground troops and in response to peace pressure from the American public.

Important as these perspectives may be, the peace movement may lose the debate if drones are seen in purely moral or economic terms or as a loss of democratic transparency. The fact is, however, that the use of drones will endanger American lives and security as they inevitably provoke violent counterattacks, such as those of December 25, 2009 (Detroit Metro Airport), February 2010 (guilty pleas in New York subway bombing plot), and May 1, 2010 (Times Square).

The U.S. already has a secret contingency plan to strike at 150 sites, nearly all in Pakistan, if another incident occurs that is traceable to any Pakistani source.[2]

The drones do not make America safer. They inevitably provoke blowback. They are not a way of waging war cheaply. They require massive investments in client states and “nation-building” on the ground. They kill people, but no victories are won from the air.

Obama has been warned about the drone strategy many times, even by his Afghanistan adviser Bruce Riedel, who privately told him in 2009:

Predator drone strikes only work because CIA paramilitary teams have an ultra-secret presence on the ground in Pakistan. Without the local informants these teams develop, there would not be good signals intelligence so that the drones know where to target. This was a risky enterprise that might collapse overnight. So don’t rely on drones… They look like a cheap way out, but they’re not.[3]

Pakistan is on fire, writes Imtiaz Gul.[4] Between 2002-2009, suicide strikes in Pakistan rose from one to 90 per year, along with 500 bombings and ambushes in that single year.

Critics of the drone strategy include David Kilcullen, the top counterinsurgency adviser to General David Petraeus in Iraq, the Long War Journal, and the New America Foundation. These are not peaceniks, but skeptics of counterterrorism from the air. According to the Long War Journal:

The Pakistani government considers Nazir, the Haqqanis, Bahadar, and Hekmatyar to be “good Taliban” as they do not carry out attacks against the Pakistani state. All of these Taliban factions shelter al Qaeda and various other terror groups.

The inescapable conclusion is that Bahadar, Nazir, the Haqqanis, and Hekmatyar — warlords all — are fighting against U.S. forces in their traditional regions of influence in Afghanistan, and would lessen or cease fighting if the United States followed a timetable for withdrawal from those areas. 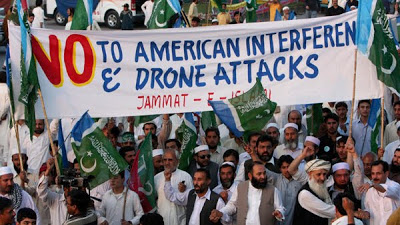 Supporters of a Pakistani religious party, Jamaat-e- Islami, join a rally against the U.S. drone strikes in Pakistani tribal areas in Peshawar, Pakistan, April 23, 2011. Photo by Mohammad Sajjad / AP.
Does that mean the Taliban or its multiple factions and warlord allies will take over Kabul if the U.S. withdraws? Not necessarily, unless the fragile, corrupt, and dysfunctional Karzai regime simply implodes. But according to an insightful analysis in the Asian Times by Brian Downing, it is more likely that Afghanistan will be “carved up” by regional powers with vested interests.

In his scenario, “the regional powers, especially Pakistan, will use their influence with the Taliban to convince them to limit their ambitions to the south and east and accept a settlement with President Hamid Karzai at the helm in Kabul.” This is the opposite of the current U.S. military agenda. (April 27, 2011)

Second, Iran and Turkey are likely to weigh in to “press reluctant Afghan [allies] to accept the settlement.”

Third, the regional powers — Pakistan, China, Iran and Turkey — “will help to form a rentier state to govern the country,” as has happened often in Afghanistan’s history. A rentier state generally is defined as one supported by external funding and inputs far more than internally-generated revenues. Afghanistan currently has little economy beyond its illegal heroin production — resulting in 90,000 European overdose deaths per year — and the military investments of the U.S. and NATO.

Fourth, the same regional powers will cooperate and sometimes compete in developing Afghanistan resources, which include mineral resources and pipelines from Central Asia to the Arabian Sea.

Geopolitically, Pakistan and China share a common interest in limiting the presence of India in Afghanistan. A majority-Hindu India is America’s chief ally in Afghanistan, having backed the Northern Alliance interests during the past decade. Pakistan is in a state of “cold peace” with India, while China already operates a copper mine, and is building railroads along with a naval base on the Arabian Sea.

Iran, which has a long and porous border with Afghanistan, has close ties with the Northern Alliance forces (Tajiks, Uzbeks, Hazaras, etc.) and “loathes the Taliban, which massacred thousands of Shiites, killed several Iranian diplomats in Mazar-I-Sharif in 1998, and contributes mightily to [Iran’s] drug problem.” Iran, which originally helped the U.S. oust the Taliban, now would agree to “a settlement that restrained the Taliban, opened economic opportunities, and expelled the U.S.”

Like China, Iran’s Persian past casts a cultural legacy across Central Asia.

Where does all this leave the United States and NATO? Quite simply, in the dilemma of both spreading and fighting a contagion of Islamic resistance at the same time. Facing military stalemates — at best — in Iraq and Afghanistan, while teetering towards escalation in Pakistan and beyond. A budget crisis which includes no spending for another war. And a White House worried about who will be blamed for the likely quagmires.

Deescalation, an exit strategy, is the only way out of the rabbit hole.