Tom Hayden :
Are we seeing the ‘dismemberment’ of Iraq?

The other Hayden says Iraq is ‘dead’ and will be replaced by three ‘successor’ states. 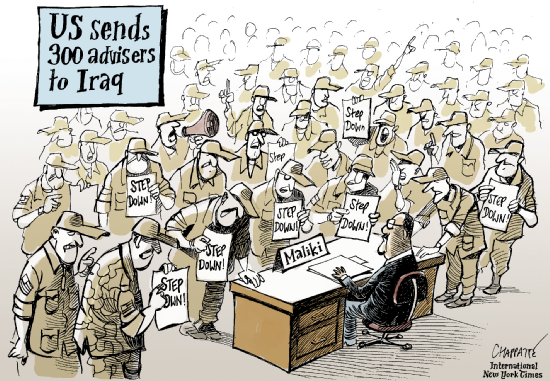 Former CIA director Michael Hayden says Iraq is dead, “will not be reconstituted,” and will be replaced by three “successor states.” One of those, which Gen. Hayden calls “Sunnistan,” will become a safe haven for terrorists and should be treated like Waziristan, a zone of secret operations and drone strikes in the tribal regions of Pakistan.

The second, called “Shiastan,” should be shored up by recapturing the oil refinery north of Baghdad, and left in a sharply reduced space. The U.S. should “snuggle up comfortable” to Kurdistan, America’s only ally, where the pesh merga forces are competing for full control of the oil in Kirkuk.

This is precisely the “dismemberment” of Iraq advocated by Arabist Bernard Lewis long ago, the end of a once-powerful Arab nationalist state. [See “The madness in Iraq and the comeback of the neocons” on The Rag Blog“] And it is quite the opposite of the line taken by President Obama and others, who are pressuring the Shiite leader Nouri al-Maliki to form a “power-sharing” coalition or be replaced, as a condition of U.S. assistance.

Assuming Gen. Hayden is right, it’s baffling to ask what useful role 300 new U.S. military advisers will be serving amidst a disintegrating Iraq. But assuming Obama can wrest concessions from or remove al-Maliki, Gen. Hayden’s analysis points to an irreversible slide towards the end of Iraq. All the king’s horses and all the king’s men probably won’t be able to put Humpty Dumpty together again.

The U.S. will have to choose between the separatists of Kurdistan who have seized Kirkuk with its oil fields, and the Shiite al-Maliki regime and even Sunnis who oppose greater Kurdish autonomy. Then the U.S. will try to patch together a coalition between the Shiites and Sunnis in Baghdad, if there are any who want to coalesce rather than fight, which is a shaky concept at best.

Finally, and most important, the U.S. is entering a vast secret war against the Sunni insurgents who now hold all of northwest Iraq and southeast Syria as a huge liberated zone on its way to declaring a Caliphate.

Wow. Another secret and probably unwinnable war. How will the media or Congress obtain any reliable news from such an impenetrable region? What only seems clear is that the U.S. is tilting towards a de facto alliance with its longtime strategic enemy, Iran, on the side of Iraq’s Shiites and their allied Syrian dictator Bashir al-Assad in Damascus to the north. That move would rattle Tel Aviv and Riyadh, and might well increase the possibility of a U.S.-Iran nuclear deal.

Then there’s Afghanistan, now at the brink of chaos only weeks after all the dazzling media fanfare about its “successful” presidential election. The leading candidate in the first round, Abdullah, has effectively pulled out, denouncing the final voting as rigged by a Karzai conspiracy. He may be right.

Abdullah represents the old Northern Alliance faction in the country’s original civil war. Abdullah’s primary, though not only, base is among the Tajik minority, which ironically (or not) is historically allied with Iran. In fact, Iran supported the U.S. in overthrowing the initial Taliban regime, then encouraged the Tajiks to help Karzai form his new government. Iran’s confusing interests are sectarian and practical. They oppose the Taliban’s ideology, want to protect their ethnic allies in Afghanistan, and stop the massive flow of drugs over the Afghan-Iran border heading towards Europe.

Can the Obama administration afford to watch Afghanistan become more dysfunctional than it already is, on top of the fiasco in Iraq? The Taliban can take the military offensive at any time of its choosing as the U.S. troops continue to depart. Its pressure could heighten the internal contradictions in already-shaky Kabul, just as the ISIS offensive has caused a buckling of the regime in Baghdad.

Will Obama be accused of having failed to end two wars which the Bush administration never should have started?

Instead of “ending two wars,” will Obama be accused of having failed to end two wars which the Bush administration never should have started? Has American policy finally led to a vast new sanctuary in “Sunnistan” from which terrorist attacks will be launched? Has intervening in two sectarian civil wars created thousands of new jihadists seeking revenge on Americans? But John McCain, Lindsay Graham, and the ascending neo-cons feel vindicated from the sidelines. The Kristol and Kagan dynasties are having a surge of their own, though their solutions are out of the nineteenth century.

Meanwhile, Congress has been frozen out of its role in the checks and balances. This week, however, by a voice vote the House approved a defense appropriations amendment which prohibits funding for any U.S. troops in Iraq “equipped for combat” or near to “imminent involvement in hostilities,” which could pose war-powers problems similar to those the president faced on the brink of escalation in Syria.

Despite a valiant effort led by Barbara Lee, supported by streams of anti-war messages to the Hill, the Republican House rejected several more effective tools to prevent the wars:

The Long War doctrine against terrorism continues to prevail.

The Long War doctrine against terrorism continues to prevail. Described by Pentagon strategists as secret counterterrorism and counterinsurgency operations over a 50-to-80-year period, the policy may have prevented terrorist attacks on the U.S. but certainly has resulted in the out-of-control pursuit of revolutionary jihadists to ever-expanding battlegrounds, the latest being North Africa.

The brutal irony is that a new and virulent jihad is sweeping across the very territories where the U.S. once claimed “mission accomplished.” Instead of success, the U.S. policies have planted the seeds of future terrorist attacks on American soil for years to come. The obvious failure of the Long War militarily doesn’t seem to matter if it remains immune from a political standpoint.

The final battle in the war on terrorism, then, will be fought on the field of American politics, by continuing to steadily turn congressional districts into new kinds of sanctuaries, for insurgencies favoring peace

7 Responses to Tom Hayden :
Are we seeing the ‘dismemberment’ of Iraq?