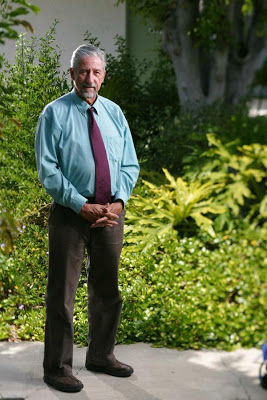 CULVER CITY, Calif. — On a steamy spring day, in a cramped office that hot air can’t escape, the archetypal child of the ’60s does something truly radical.

He wears a necktie.

This is not the hairy, scary leader of the New Left who had Chicago locking up its daughters for the 1968 Democratic National Convention.

Still, he knows most people still picture him as a sort of cartoon version of himself: shirtless, shouting down authority or scuffling with cops on the streets.

“I can’t get past that,” he says of the stereotypes. “I can’t help them with their problem. They can’t see me. I can be, like, 68 years old and I’m still trouble, because they’re thinking about something in Vietnam or they’re thinking about Jane Fonda. Or they think I slept with their daughter. They think I burned my draft card. It’s like a big Rorschach of things that I did or did not do.”

If speaking out still means “trouble,” then maybe Hayden really hasn’t changed that much.

Forty years after he helped lead the anti-war protests that ended in violent confrontations outside the ’68 convention, he just put out a new book, Voices of the Chicago Eight, about the circus-like conspiracy trial for protest organizers and the consequences of attempts to come down hard on dissent.

He offers regular takes to Huffington Post readers and was an early member of the group Progressives for Obama. He lectures on college campuses and offers an updated version of the Port Huron Statement — the 1962 manifesto of the Students for a Democratic Society that challenged young people to boldly venture into “participatory democracy.”

And behind the scenes, Hayden closely monitors protest plans for the upcoming Democratic and Republican national conventions, advises organizers and warns that authorities appear to be falling into a predictable pattern of hype and overreaction.

“I think that Denver officials would be well-advised not to believe everything that the FBI warns them about,” Hayden says. “That’s how things can get out of hand, due to fabricated, exaggerated projections about violence or protest.”

As the convention approaches, federal dollars pour into the security effort and law enforcement agencies flex muscle with high-profile exercises.

“They don’t learn,” Hayden laments. “What you saw in 2000 was the claim that 75,000 anarchists were descending, the secret funding of permanent police equipment, the denial of permits for protesters. You saw the same thing in 2004. You will see the same thing in 2008.”

He thinks Big Brother posturing helps scare away peaceful protesters, gives the community a false sense of security and can, in some cases, provoke confrontations at demonstrations that would otherwise be routine and mostly peaceful.

“So they have their view,” Hayden says of security planners. “They’ve learned nothing from 1968.”

Nation, party were both divided

As demonstrators get ready for Denver 2008, 40-year-old memories are front and center. One coalition operates under the “Re-create 68” banner, conjuring images of the street clashes that overshadowed the Democratic Convention itself, galvanizing the anti-Vietnam War effort and undermining Democrats’ hopes in that long-ago fall.

True, there was a war then and there is a war now.

But back in 1968, the country — and the Democratic Party — were more starkly divided over the battle waging overseas.

The Tet offensive by North Vietnamese and Viet Cong forces at the end of January obscured the light at the end of the tunnel in the war. Hundreds of young U.S. troops were dying every week. Facing a rising voter backlash, wartime President Lyndon B. Johnson was forced to prematurely end his re-election bid at the end of March.

Within days, the assassination of the Rev. Martin Luther King Jr. caused rage to explode into riots, arson and looting in 75 cities. Robert F. Kennedy calmed a shocked crowd in Indianapolis, telling them his brother, too, had been killed by a white man. But weeks later, the younger brother, too, was shot dead, fraying emotions even further. The nation was on edge heading into the Democratic National Convention in Chicago.

Until then, some protest organizers held out hope of getting the needed permits to avoid confrontations at marches and park demonstrations. But Hayden says he knew trouble was inevitable.

“I planned for multiple scenarios, not knowing which one would play out,” he says, sitting in the cramped office while his research assistant continues working nearby. “But certainly, after the murder of Kennedy, coming on the murder of King, to me it was in the air that we were going to be busted and face serious harm unless we surrendered and left the city and simply went along with the plan . . . just go along with our own disappearance.”

They didn’t, even though they knew — from personal contacts — that the FBI was tracking their every move, around the clock.

One declassified FBI memo included in Hayden’s new book expresses anger that bureau officials were unaware of his involvement in a student occupation of buildings at Columbia University until after his picture appeared in Life magazine.

“In evaluating this case, you should bear in mind that your prime objectives should be to neutralize him in the new left movement,” the memo states.

Clashes played out on TV

Other organizers still held out hope of getting permits for access to streets and parks for demonstrations. But Hayden says he was pessimistic — and in the end proven correct.

The city rejected permits for the Youth International Party — the so-called “Yippies” led by the late Jerry Rubin and Abbie Hoffman — to hold a massive “Festival of Life” concert.

Some thought permits would come through at the last minute — a way of giving a nod to free expression only after turnout had been dampened. But that didn’t happen, either.

Hayden says Chicago Mayor Richard Daley was “hoodwinked” into believing that “thousands of hairy Yippies were going to have sex in public while drinking from the LSD-laden waters of Lake Michigan. They actually believed that. And this sex in the parks on acid would occur at roughly the same moment that black revolutionaries would storm the convention with guns.”

So the stage was set for constant confrontations, games of cat and mouse between police and protesters, and then bloody clashes on television, just as Democrats also were struggling to show they could maintain order among squabbling delegates inside the convention hall.

It culminated on Aug. 28, when Vice President Hubert H. Humphrey of Minnesota was to accept the presidential nomination. That afternoon, while delegates waged a contentious debate over Vietnam War planks in the party’s platform, police allowed a “legal” anti-war rally at Grant Park.

Things broke loose after a shirtless teenager climbed a flagpole, ostensibly to turn the flag upside down as a distress symbol. Police swooped in to make an arrest, the crowd surged and some threw stones or dirt clods at a police car, and the scene quickly deteriorated. Thousands of police, soldiers and National Guardsmen surrounded the area. Calm was restored, but by twilight, many protesters were more determined to make unsanctioned parades to reach the convention site or the Hilton hotel, where delegates were staying.

That night, after moving through the city disguised with a fake beard, Hayden ended up in a police skirmish at the hotel’s Haymarket Lounge — “named, strangely enough, in memory of Chicago police killed by an anarchist’s bomb during a violent confrontation between police and protesters in 1886,” Hayden writes.

By the time the week’s convention ended, 668 people had been arrested, 101 people were treated at local hospitals for their injuries, and hundreds more reportedly received first aid or treatment by protest medics.

And the Democratic Party’s hopes of retaining the White House were the ultimate casualty. Republican Richard Nixon was elected with more than 100 electoral vote margin.

Despite the “Re-create 68” sentiment of some Denver protest organizers, Hayden saw little chance of a chaotic rerun when he sat down in April in his Culver City office to discuss the upcoming Democratic National Convention.

Back then, when the battle between Sens. Barack Obama and Hillary Rodham Clinton still raged and there was talk of superdelegates throwing the nomination to Clinton, Hayden imagined there could be some sort of drama on the streets if people thought the election had been stolen. But it never came to that.

More likely, he predicted, were smaller demonstrations to keep up the pressure for Democrats in Denver to take tougher anti-war stands, with more fierce protests against the “war-makers” at the Republican National Convention in Minnesota.

By early July, however, Hayden said he was growing concerned about the city’s posture toward protesters and the worst-case scenario security exercises, with black helicopters roaring through the downtown skyline.

The ACLU and protest organizers went to court challenging the location of a so-called free-speech zone on the far edge of a parking lot. Planners of “Tent State University,” who hoped to use City Park to house tens of thousands of anti-war activists, were told they would have to clear the park at 11 each night. The ban on camping and curfew enforcement raises the specter of the nightly crackdowns at Lincoln and Grant parks in Chicago ’68.

“I do think they are playing around unnecessarily with the rights of protesters to protest,” Hayden said in a follow-up interview. “I don’t know how the negotiations will come out, but you know, naming something a protest zone but then not allowing it to be heard or seen, it’s a mockery of the First Amendment. Most importantly, it’s not necessary.

“It does seem to me there’s a legitimate right to protest at stake,” he said. “I don’t think the protests will be very large if Obama is the nominee. I don’t see the point in interfering with them . . . It’s particularly crazy because most of the delegates at the Democratic convention have been in many demonstrations themselves.”

The security exercises, with helicopters buzzing the city, reminded Hayden of something out of the movie Dr. Strangelove.

“The implication is very unsettling,” he said. “The message was that the people coming to protest deserve this kind of repression if they get out of hand . . . They’re just trying to scare the public into justifying more tax dollars for a false sense of security — more gadgets for the police department.”

He said people don’t realize that in Chicago, the initial protests were rather lightly attended, with about 1,500 people in the parks. But the numbers swelled to an estimated 10,000, in part as a reaction to the police crackdowns, Hayden says.

“If they had given us permits . . . I doubt there would have been much confrontation at all,” he says. “What caused the rioting in the streets was the lack of permits and the lack of a place to stay. Too much order creates disorder is the way I’ve always put it.”

One might think that Hayden, one of the pre-eminent social activists of the ’60s, would be disappointed with the anti-war efforts and the other movements of today.

“I think it’s a remarkable peace movement,” he says. “You don’t have the draft. You have one-fifteenth of the American casualties now that you had at this point during Vietnam. The establishment is doing everything it can to keep this war from impacting the American people. And yet, people have seen through it.”

The public at large turned against the Iraq war by the end of 2004, he says, “which I think means the ghosts of ’68 are still with us. People know a quagmire when they see one.”