Tom Hayden : In Egypt and the Middle East, It All Falls Down 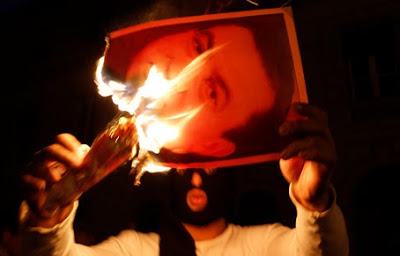 A protester burns a picture of Egypt’s President Hosni Mubarak. Photo by Amr Abdallah Dalsh / Reuters.
Egypt and the Middle East:
It all falls down

Sixty years of American foreign policy alliances in the Middle East are in collapse.

Hosni Mubarak is finished, if not literally, certainly as a viable leader of the most important country in the Arab world. Finished as well is the U.S. alliance with Mubarak’s dictatorship, one forged in the name of expediency, and resulting in torture, repression of human rights, and the abuse of a majority of the Egyptian people.

Up for reconsideration is the détente between Egypt and Israel on which the U.S. has spent over $30 billion for Cairo alone, most of it for military purposes.

The U.S. will not be able to airbrush away its past and current integration into Egypt’s repression. But President Obama carefully began that process Friday afternoon by calling on Mubarak not to use violence against the protestors and to lift Cairo’s ban on the Internet and social networks.

The U.S. and Israel are going to be shopping for some new partners in the Middle East. But with whom?

This outbreak shows that the rules of social movements apply to confrontations with dictatorships, not just democracies, across cultural and international lines. This movement is under the control of the youthful Street, and will flow according to the dynamics of the Street.

This movement was initiated by surprise, without the leadership of political parties or opposition groups. This movement is leading to the implosion of the status quo, and, whatever interim arrangements are negotiated, its youthful protagonists in formations like the “April 6 Group” are going through a rite of passage to becoming a new generation of leadership.

For now it’s a pro-democracy movement, nothing more. This was supposed to be the dream of the neo-conservatives and Bush Republicans. But now that it’s here, they’re in panic full-stop.

The two organized forces who are vindicated by this uprising are Al Qaeda and Al Jazeera, for different reasons. In fact, Al Qaeda may be surprised at the spontaneous rising in the streets, at forces not led by any organized and clandestine vanguard, but embodying an alternative way to bring down Arab dictatorships. Al Qaeda may not be comfortable at the sight, but they will be credited as prophetic.

Al Jazeera deserves the credit for inventing a networked platform for the modern pro-democracy sentiment raging across the region, erupting in the Tunisian uprising of past days. While Al Jazeera is critical of Israel, the United States, and the West, it also represents an open-source organizational model fundamentally different from the Al Qaeda network.

Yemen is convulsed by a street revolution as well, one hardly likely to enhance the U.S. strategic position. Are Kharzai, Zardari, Maliki, and Saleh different from the U.S.-backed rogues in Cairo and Tunis? Aren’t these wars “to bring democracy to the Muslim world” looking more foolish than ever?

[Tom Hayden is a former California state senator and leader of Sixties peace, justice, and environmental movements. He currently teaches at Pitzer College in Los Angeles. His latest book is The Long Sixties. This article was also posted to Tom Hayden’s Peace and Justice Resource Center.]

1 Response to Tom Hayden : In Egypt and the Middle East, It All Falls Down